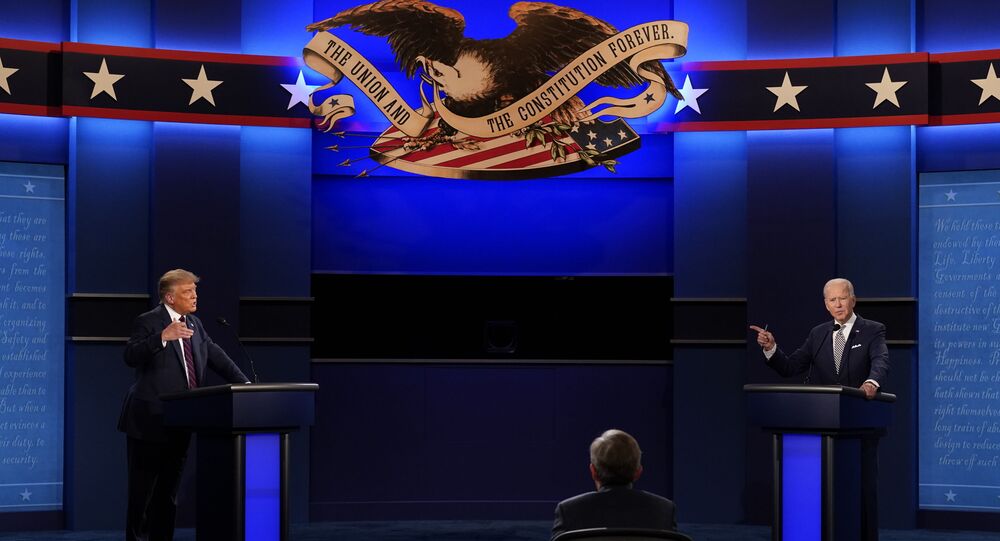 The heated and disorderly Trump-Biden debate this week undoubtedly made an impact on US voters' perception of the two candidates. Verbal exchange aside, the presidential contenders' body language had a role to play too, and appeared to speak volumes about their confidence.

Sputnik: Considering Trump and Biden's body language, who was the leader in the debate and who appeared the most comfortable and confident, in your view?

Michelle Cohen: Both candidates have very different “body language” styles. Trump’s body language seems to take an assertive and sometimes aggressive strategy, while Biden takes a more humble approach. In terms of who appeared the most comfortable and confident, it appeared that President Trump slightly expressed that, through his body language, more than Vice President Joe Biden. However, Biden had some confident and powerful moments throughout the debate.

Sputnik: Why? What gestures indicate this?

Michelle Cohen: At the beginning, President Trump appeared to take his time walking to the podium with a back-straight, head up confidence in his walk. Throughout the debate, his head was raised high and he frequently looked at Biden, which may indicate that he was listening with confidence. Trump was more extemporaneous in his responses and didn’t take as many notes. This made him look more confident and positive. Several times, Trump points back at Biden, while gestures with his hand to his chest. This usually comes off as a sincere gesture, indicating that Trump is trying to show honesty; especially when he spoke about the media giving him bad press while giving Biden good press. Trump’s open-arms approach, while holding on to the podium usually indicates confidence of readiness and a “bring it on,” type gesture.

Biden appeared slightly anxious in his first moments of walking a bit quicker with shorter steps to the podium. Biden also did a lot of rapid eye blinking when he said, “ I know how to get the job done.” This is indicative of stress or possibly a lack of confidence in what he’s saying. However, Biden’s moments of confidence were indicated when he first came on stage to acknowledge President Trump. His open palms gesture was a warm welcome to Trump, showing sincerity. His closed fists immediately afterwards signals readiness and strength for the debate. Biden’s best moments of confidence came when he would stare down the camera and speak directly to the audience at home. His direct eye contact and his calm voice showed calmness and a connection between him and the viewers, which can be interpreted as genuine and comfortable to others. He appeared calmer and less rattled throughout the debate, but did have moments of stuttering, showing nervousness.

Sputnik: Some experts say that Trump's tactic to be on the attack was implemented very specifically. What do you make of this? What do gestures and body language tell us about this tactic?

Michelle Cohen: Trump’s gestures are usually implemented very specifically. He uses body language associated with confidence. His practice of open body language, pointing, talking loudly over Biden and the moderator until he has the last word, indicated his determination to show that he is in charge. It can be interpreted as "power moves," or defensive and bullying.

Sputnik: How would you characterise the tactics of Trump and Biden?  What emotions did the two candidates feel?

Michelle Cohen: Biden uses his “look and look away” strategy. He glances at Trump, but as soon as Trump says something he disagrees with, he looks away to the moderator in dismissal. Biden’s lack of eye contact makes Trump’s words seem a little less impactful. That indicates that, in those moments, he was not affected or getting ruffled, and may show strength and confidence. Biden makes his thank you to the moderator more clear and longer. That appeared genuine.

There was disrespect on both sides as evidenced by interrupting the moderator and talking over each other. Trump was louder and appeared more dismissive and dominant. He has used these techniques in the past to get his points across.

Sputnik: Did they manage to conceal their real emotions? If so, what were the emotions they failed to hide?

Michelle Cohen: In some instances, they showed their real emotions. Trump became quite visibly irritated once the Affordable Care Act was mentioned, where he became defensive, using his arms to get his message across. Trump also tried to control both Biden and the moderator by interrupting them both with a louder voice. This may show a need to be defensive rather than confident. Viewers and body language experts may interpret this as a bullying tactic.

Biden also does a lot of rapid eye blinking when he says, “I know how to do the job. I know how to get the job done.” This is indicative of stress or possibly a lack of confidence in what he’s saying. Biden raises his voice in anger when addressing accusations towards his son from Trump. He also turns towards Trump and points a finger at him indicating anger. Biden also called Trump a “clown” two times. Name-calling indicates a lack of control and anger.

Sputnik: Some experts say that Biden smiled more, he was warmer in his responses, and did an excellent job at looking straight into the camera, reaching out to the public.

Michelle Cohen: Yes, I believe these body language gestures did indicate his authenticity and genuine connectedness to the audience. This was conveyed through his body language throughout the debate; more so than Trump.

Sputnik: Might this tactic have been used in order to hide his lack of confidence when addressing the issues that were on the debate's agenda?

Michelle Cohen: Biden’s predominant smiling may have indicated a tactic he uses to show calmness, but can indicate that he was trying to keep his emotions at bay and may appear as a defensive mechanism to hide his anger towards Trump.

Sputnik: Biden used the phrase “shut up, man”. What motivated him to choose these words and his refusal to address the issues raised by his opponent?

Michelle Cohen: Some outbursts are impulsive reactions, however, Joe Biden may have let down his guard, when he felt out of control and tired of not being able to get many of his points across, due to Trump's many interruptions.