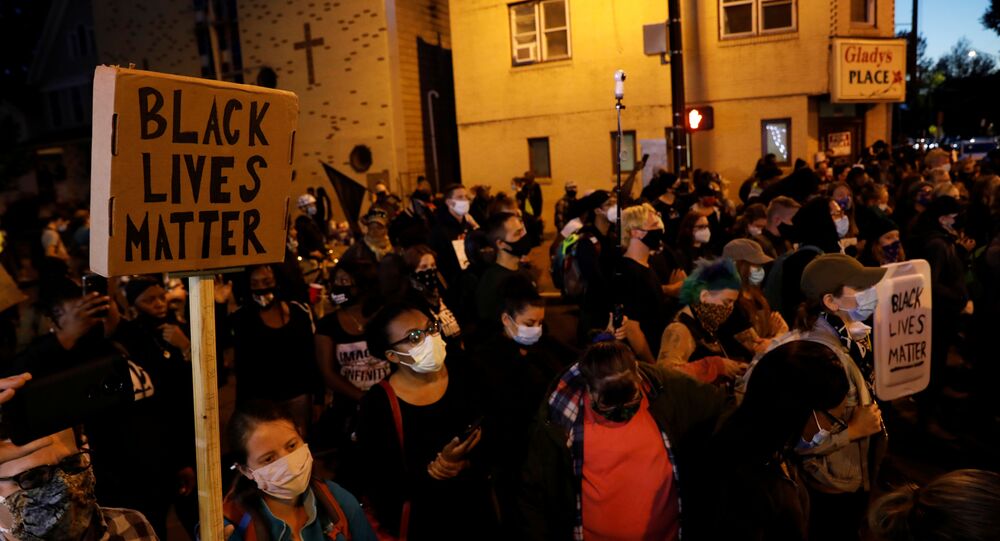 Footage of a group of tough-looking men armed with shotguns guarding a Russian restaurant against looters in downtown San Diego during protests triggered by the death of African American George Floyd in police custody had earlier circulated the media, with owner Ike Gazaryan subsequently reliving those events in interviews.

A Russian restaurant in downtown San Diego, California, and its owner gained media fame after a viral photo showed how a band of men stood guard in front armed with shotguns and handguns while activists marched the streets during anti-racism protests across US cities triggered by the death of a black man, George Floyd, in police custody.

Not mafia, we just love Borsсh!

Ike Gazaryan, the 36-year-old Armenian owner of the upscale restaurant Pushkin, subsequently shared the details of those events in numerous interviews. Now, he has shared his opinion of recent developments in the US ahead of the November elections.

'Vote for Law and Order'

Ike Gazaryan has revealed to Sputnik that like many other Russian-speaking immigrants in the United States, he supports the re-election of Donald Trump.

"I am for order on the streets. The Democrats have provoked me into voting for Trump", Gazaryan said.

Gazaryan had called in some friendly muscle after mass looting occurred in San Diego's La Mesa neighbourhood in June. At the time, he claimed that losing his place of business after a two-month COVID-19 lockdown would have meant bankruptcy. He and his friends placed the restaurant under protection to discourage would-be looters.

Gazaryan described himself as a "voter for law and order", a re-election campaign motto espoused by the US president.

"I used to be a Democrat too, a lot of people were Democrats, but the way the Democratic Party behaved in the last four years has changed the attitude towards them. They themselves turned many people into Trump supporters. There was never such a degree of hatred among people before", deplores Gazaryan.

According to the restauranteur, he applauds how under the Trump administration (prior to the coronavirus pandemic) there was low unemployment and the economy was in a good place.

"If it were not for the coronavirus, everything would continue to be good. But even with the coronavirus, he does more than others, and he is constantly scolded for things that need to be praised", says Gazaryan.

According to him, Russian-speaking voters are in the majority intending to cast their vote for Donald Trump in the November elections in the US, as they fear the consequences of a Democratic win, which might bring about "communism".

"The majority of Russian-speakers support Trump. They saw what happened under communism, they ran away from it ... they certainly don't want to go through this a second time", he explained.

Besides this, according to the businessman, numerous Russian-speaking US citizens of Jewish descent are grateful to Trump for supporting Israel and are wary of the "anti-Israeli rhetoric of left-wing activists".

As for Trump's foreign policy stance, the restaurant owner claims to be impressed by how the president does not hide that he is against US interference in the affairs of other countries, especially when it entails Americans shedding their blood in wars on foreign soil. This is part of Trump's pledge to end "forever wars", drawing down troops in Iraq and Afghanistan.

"The man has not actually started a single war, but is trying to stop several other wars. But they constantly put a spoke in his wheels. Probably, it is very difficult to work when you are constantly condemned, when no matter what you do, you are always found to be in the wrong; it is sure to have an effect on him", said Gazaryan.

As for the latest news about Donald Trump having contracted COVID-19, the businessman claims it will only boost his popularity with his supporters.

"The next time he comes to the debate, he will look like some kind of hero, because he went through this and recovered. It can be a plus for him", Gazaryan said.

At the same time, he is not entirely happy about the way the debate between the two presidential election rivals unfolded last week.

"Biden cursed, swore, called him a clown, stooped to personal accusations… it was already very ugly. They both behaved incorrectly", believes Gazaryan.

According to him, if Trump had not interrupted Biden over and over again, there would have been no doubt about the president's victory in the debate.

Regarding the possibility that Joe Biden might triumph in the November elections, Gazaryan believes vice president Kamala Harris will be de facto president.

Ghazaryan criticised Harris for being too relentless and tough as a prosecutor in San Francisco who not only fought for the same "law and order" that Trump advocates, but also contributed to the conviction of many African Americans, including those who could be acquitted with full disclosure of evidence by prosecutors.

Gazaryan said that he himself worked in San Francisco in a "gritty" area, where his auto repair shop was repeatedly looted by armed gangs, and his brother was shot.

He cited a number of common acquaintances with Harris, who spoke of her extremely tough stance on crime at the time. However, now Harris is trying to change this image to boost her chances, voicing support for the Black Lives Matter (BLM) protests and, indirectly, riots, Gazaryan was cited as saying.

"She deceives people... to match her image with that of the Democratics… She is flexible as a snake".

'We Got Shields!' Video of Louisville Protesters Getting 'Supplies' From U-Haul Truck Goes Viral