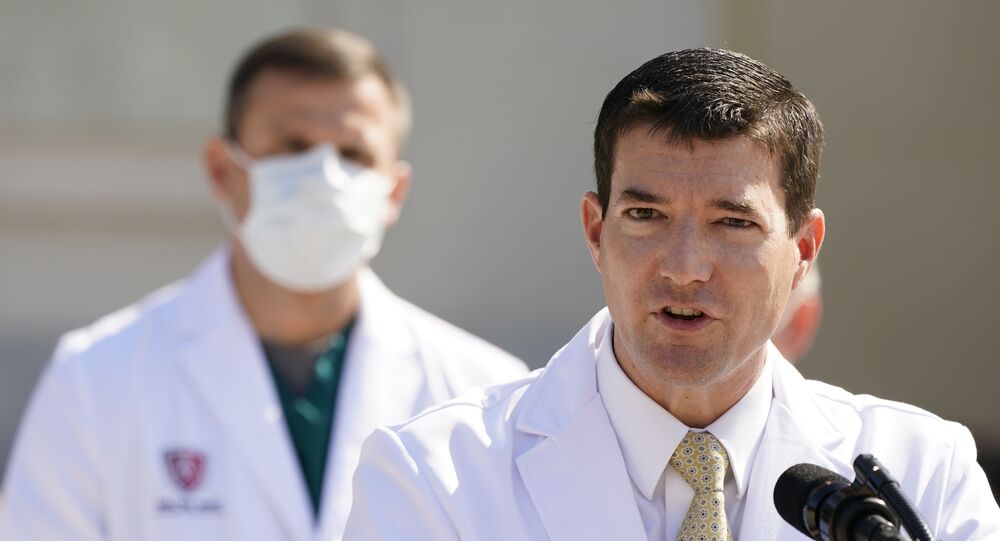 Trump Doing Well After Blood Oxygen Level Dropped Twice, Can be Discharged From Hospital on Monday

US President Donald Trump announced on Friday that he had tested positive for coronavirus. Following the news, he was moved to Walter Reed National Military Medical Center for further observations and has remained there since.

Donald Trump's medical team revealed at a news conference on Sunday that the president has experienced "two episodes" of falling oxygen levels since being diagnosed with COVID-19.

The president's oxygen level has now reached 98%, the team said, adding that the US commander-in-chief can be discharged from the hospital as soon as Monday if his condition continues improving.

According to Trump's physician Dr. Sean Conley, the president was treated with steroid dexamethasone after experiencing a second "transient" drop in oxygen levels. He is believed to have had high fever on Friday but his temperature has remained normal since then.

US President Donald Trump is currently undergoing treatment at Walter Reed National Military Medical Center and has been given a dose of the experimental antibody cocktail, as well as antiviral drug remdesivir, and immunity-boosters, such as Vitamin D and zink.

A specialist in pulmonary critical care, Dr. Brian Garibaldi, insisted that POTUS was not showing any side effects after receiving treatment and was "up and well".

On Saturday, Dr. Sean Conley told a media briefing that the president was doing "very well" but concerning reports about the president's state of health were still circulating in the media.

Trump later shared a video-tweet from Walter Reed Military Medical Center, a medical facility he was moved to upon Conley's recommendation. POTUS announced to his followers that he was feeling "much better" since his diagnosis and was looking "forward to finishing up the campaign."

This self-assessment was confirmed by US National Security Advisor Robert C. O'Brien, who said on Sunday that President Trump was "in great shape and firmly in command of the country."