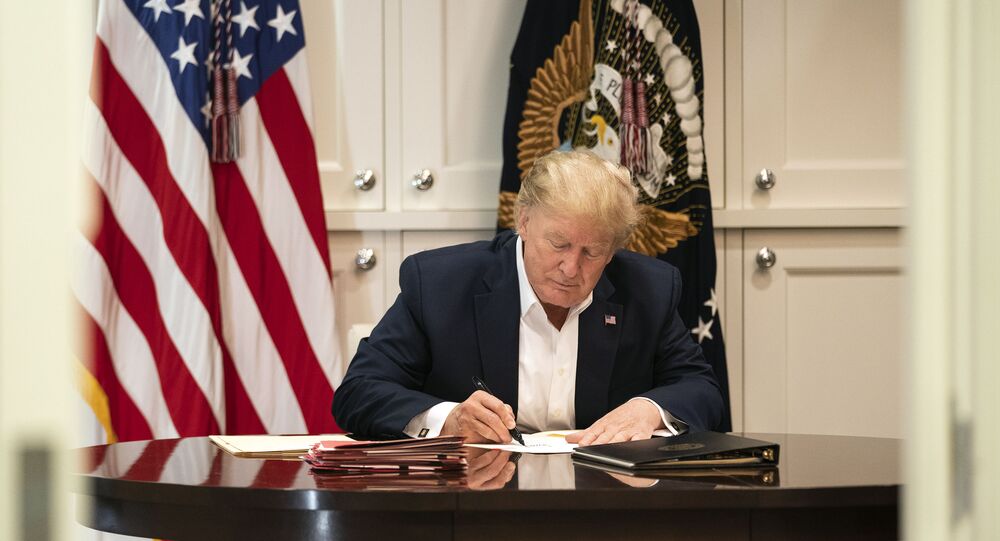 US President Donald Trump is currently undergoing treatment at Walter Reed National Military Medical Center after contracting coronavirus. Despite some reports that his condition was "serious", the president shared a video from the hospital on Saturday, where he revealed that he was doing "much better".

United States National Security Advisor Robert C. O'Brien said on Saturday that US President Trump was "in great shape and firmly in command of the country," following his COVID-19 diagnosis.

The comments were made during CBS News' Face the Nation programme, with O'Brien saying that the possible transfer of power was "not something that's on the table right now." However, he added that the White House has "a great Vice President" and is prepared for any scenario.

"I spoke with the Chief of Staff (Mark Meadows) this morning and the good news is the president feels very well and he actually wants to get back home to the White House and get back to work, but I think he's going to stay at Walter Reed for at least another period of time," O'Brien revealed.

NSA Robert O’Brien initially says on @FaceTheNation that a transfer of power is “not on the table at this point” but later adds “We’re prepared. We have a great vice president… we do have plans for everything.” pic.twitter.com/ZB3wBcvI0j

​President Trump announced on Friday via Twitter that he and the First Lady had tested positive for coronavirus. Upon the recommendation of his physician Dr. Sean Conley, POTUS was moved to Walter Reed military medical facility for further monitoring. Trump was injected with an eight-gram dose of the antibody cocktail REGN-COV2 and has started receiving the antiviral drug remdesivir.

On Saturday, the president shared a video-tweet from the medical centre where he thanked the hospital staff for "the incredible job they have been doing" and said that he was feeling "much better", while revealing that his 50-year-old wife Melania was also doing well.

Trump added that despite his good condition, the next few days would be "the real test" for him.

The president, who is seeking re-election in November, also insisted that he will be "back soon" to finish up his presidential campaign.

​Prior to the video announcement, CNN reported, citing an anonymous "Trump campaign adviser", that the president's condition was "serious" as he allegedly had difficulty breathing, something which the report said caused "serious concerns" at the White House.

According to the US Constitution, in case the president is unable to fulfil his duties, Vice President Mike Pence will assume his role as the country's commander-in-chief. Second in line for the White House would be Trump's severe critic - Speaker of the House of Representatives Nancy Pelosi. The next people in line are Chuck Grassley, the President pro tempore of the Senate, followed by Secretary of State Mike Pompeo.