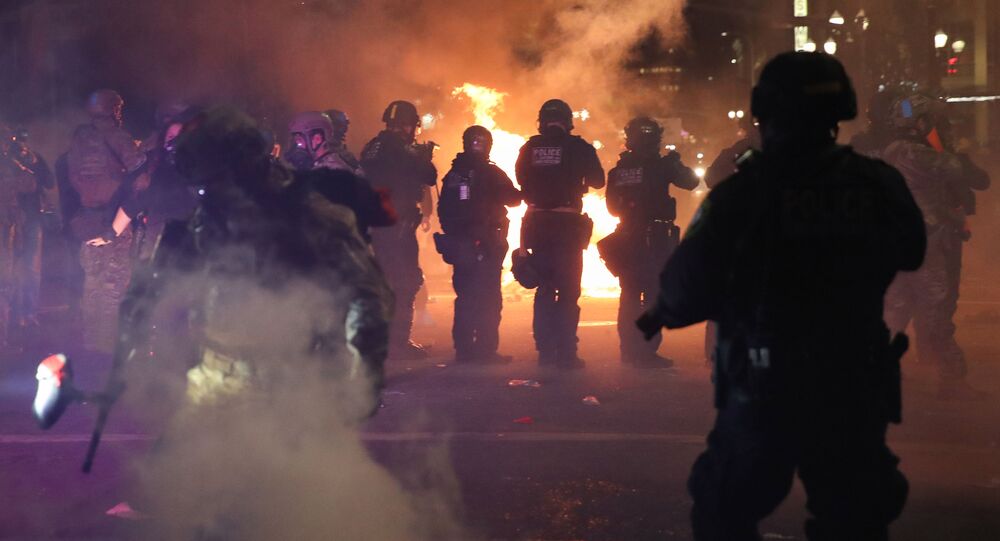 In recent weeks, in a repeat of claims made during the 2016 US presidential election, Washington began accusing ‘Russian state actors’ of trying to interfere in the 2020 race as well.

Russia “seeks to sow divisions and create chaos across America and other democratic societies,” the official Twitter account of the White House National Security Council has alleged in a tweet announcing new US sanctions against four “Russia-linked individuals.”

Russia seeks to sow divisions and create chaos across America and other democratic societies. Today, the Administration utilized EO13848 to designate four Russia-linked individuals for attempting to influence the U.S. electoral process. https://t.co/jnDCMiexby

On Thursday, the Treasury’s Office of Foreign Assets Control announced restrictions on four “Russia-linked” persons, accusing them of “attempting to influence the US electoral process,” and charging Moscow with using “a variety of proxies to attempt to sow discord between political parties and drive internal divisions to influence voters as part of [its] broader efforts to undermine democratic countries and institutions.”

The sanctions’ main target is Andrii Derkach, the Ukrainian lawmaker who released audio recordings in May purportedly featuring conversations between former Ukrainian President Petro Poroshenko and former Vice President Joe Biden,  and revealing the extent to which Biden sought to pressure Kiev to fire a prosecutor investigating a Ukrainian gas company his son was working for.

The Treasury describes Derkach as “an active Russian agent” who “has directly or indirectly engaged in, sponsored, concealed or otherwise been complicit in foreign interference in an attempt to undermine the upcoming 2020 US election.”

© Sputnik / Mikhail Palinchak
‘Joe, I Have Positive News For You’: Trump Retweets Alleged Audio of Biden-Poroshenko Phone Call
The three other individuals, Russian nationals Artem Lifshits, Anton Andreyev and Darya Aslanova, were sanctioned for their alleged work “on behalf of, directly or indirectly,” with the ‘Internet Research Agency’, which US officials and media have (falsely) claimed sought to influence the 2016 election through a massive and powerful trolling campaign on social media.

The Russian Foreign Ministry commented on the new designations Friday, with ministry spokeswoman Maria Zakharova lamenting that the US seemed to be determined to make even a semblance of normal relations between the two countries impossible.

Stressing that Russia did not, does not and will not interfere in elections in other countries, Zakharova suggested that even “the already ghostly prospect of at least a relative stabilization of bilateral relations is becoming increasingly distant.”

Last month, National Counterintelligence and Security Center director Bill Evanina accused Russia, China and Iran of trying to meddle in the 2020 election, with Russia alleged to be “using a range of measures primarily to denigrate former Vice President Biden and what it sees as an anti-Russia ‘establishment’.”

© CC BY 2.0 / Pawel Maryanov / Troll matryoshka
US Has ‘Run Out’ of Russians to Sanction Over ‘2016 Election Meddling’, DHS Chief Says
The US introduced several rounds of sanctions against Russia over its alleged meddling in 2016, including personal sanctions, restrictions against companies, and the expulsion of dozens of Russian diplomats. In 2017, President Trump signed a package of sanctions against Moscow which included a provision saying he could not repeal earlier imposed sanctions without congressional approval.

Moscow hit back against the restrictions in July 2017, ordering over 750 US diplomatic staff to leave Russia. The US called the move “regrettable and uncalled for.”

Despite over five years of ‘Russian meddling claims’, Washington has yet to provide Moscow or the American people with any substantive proof of its alleged meddling activities. In April 2019, investigators led by Special Counsel Robert Mueller found no evidence whatsoever of any collusion between the Trump campaign and Russia in 2016. Similarly, probes by Google, Facebook and Twitter have found little evidence of any systematic online Russian interference during the last election cycle.

US Eyes Sanctions on 7 Belarusians Over 'Vote Fraud', Mulls Punishing Russia for 'Overt Meddling'