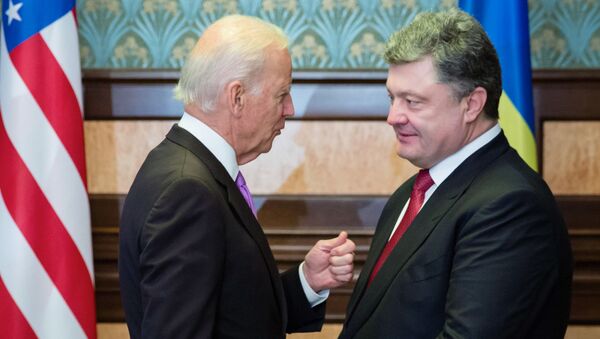 © Sputnik / Mikhail Palinchak
/
Go to the mediabank
Subscribe
International
India
Africa
Ilya Tsukanov
All materialsWrite to the author
In May, Ukrainian lawmaker Andrii Derkach released audio recordings purportedly featuring conversations between former Ukrainian President Petro Poroshenko and then Vice-President Joe Biden. Among other things, the tapes revealed the extent to which Biden pressed Kiev to fire a prosecutor investigating a Ukrainian company his son was working for.

World
‘Do Me a Favour’: New ‘Biden-Poroshenko’ Tapes Show Scale of US Meddling in Ukraine’s Politics
The clip is one of a 30 minute+ long trove of tapes released by Andrii Derkach on May 19, with the conversations also purportedly featuring Poroshenko speaking to then-Secretary of State John Kerry.