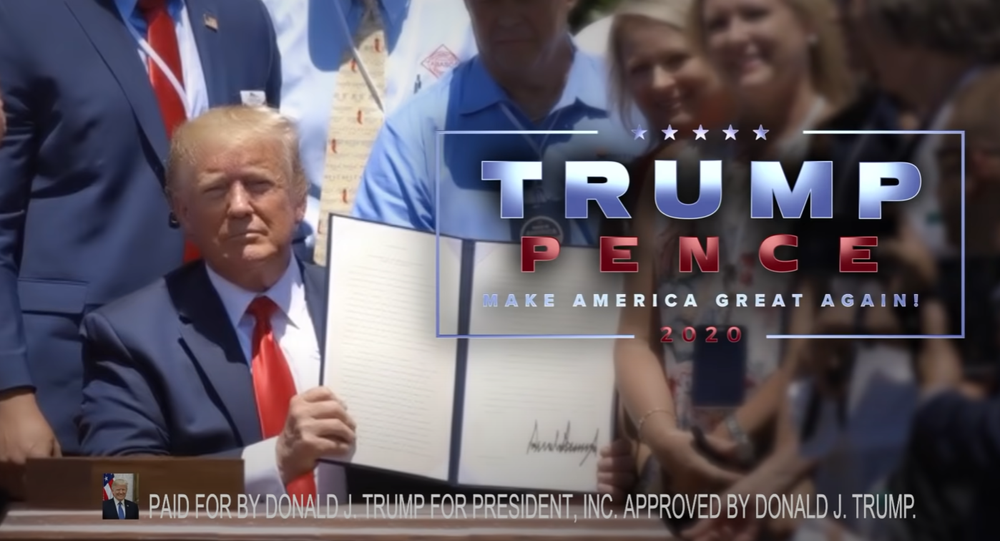 At least two companies have confirmed that the US President Donald Trump’s reelection team selected multiple foreign stock videos to use in 45’s latest campaign ad, which argues a vote for his Democratic rival will impede an ongoing “great American comeback.”

A new, made-for-TV Trump campaign ad made its debut to many via social media on Friday. The 30-second spot takes aim at Democratic presidential nominee Joe Biden, arguing the former US vice president would “kill countless American businesses, jobs and our economic future” if he won the White House.

Trump, on the other hand, would continue the “GREAT AMERICAN COMEBACK,” which is allegedly already underway.

Why would we ever let Joe Biden kill countless American businesses, jobs and our economic future when President Trump's GREAT AMERICAN COMEBACK is underway? pic.twitter.com/G0QPiwbr7D

Video production company PromZone Media Group confirmed to ABC News on Thursday that the purported US warehouse footage around the 15-second mark of the ad was actually from a Ukrainian wallpaper warehouse.

Furthermore, the footage of the woman seen seconds later is also from Ukraine, Ukrainian production studio Stockbusters told ABC News, noting the woman was also Ukrainian. The footage of the frustrated man using a computer was identified to be from Italy.

Though the ad touts US job creation and the rebirth of the country’s economy, the US Department of Labor revealed early Thursday that without seasonal adjustments, some 857,148 initial unemployment insurance claims were filed under state programs in the week ending on September 5. This comes in stark contrast to the 160,342 initial claims logged in the comparable week in 2019.

“The total number of people claiming benefits in all programs for the week ending August 22 was 29,605,064, an increase of 380,379 from the previous week,” the release detailed. Thursday’s reporting brings the US to its fourth straight week of increases in unadjusted new claims.

“This is a taste of Biden’s America,” one sister declared in the ad, which debuted during the Republican National Convention on August 24.

“We want to preserve the America our mother came here for,” she said, speaking of her Guatemala-born parent.

Catalonian public broadcaster CCMA confirmed hours later that the footage selected to illustrate the US under a Biden presidency was actually from protests along Roger de Flor Street in Barcelona, Spain, in October 2019.

Weeks earlier, the Trump-Pence campaign issued a newsletter to supporters of the now-GOP nominee, vowing to protect the Christ the Redeemer statue of Rio de Janeiro, Brazil, from “angry mobs” who were toppling post-Civil War Confederate monuments, statues of white leaders who kept enslaved Africans and other structures viewed as celebrations of racist and otherwise problematic practices.

....And because of weak and pathetic Democrat leadership, this thuggery is happening in other Democrat run cities and states. Must shut them down fast. Biden and his most Liberal in Senate running mate, Kamala, won’t even talk about it. They won’t utter the words, LAW & ORDER!

US Has Revoked Over 1,000 Visas to Chinese Nationals Over Alleged Military Ties - State Department