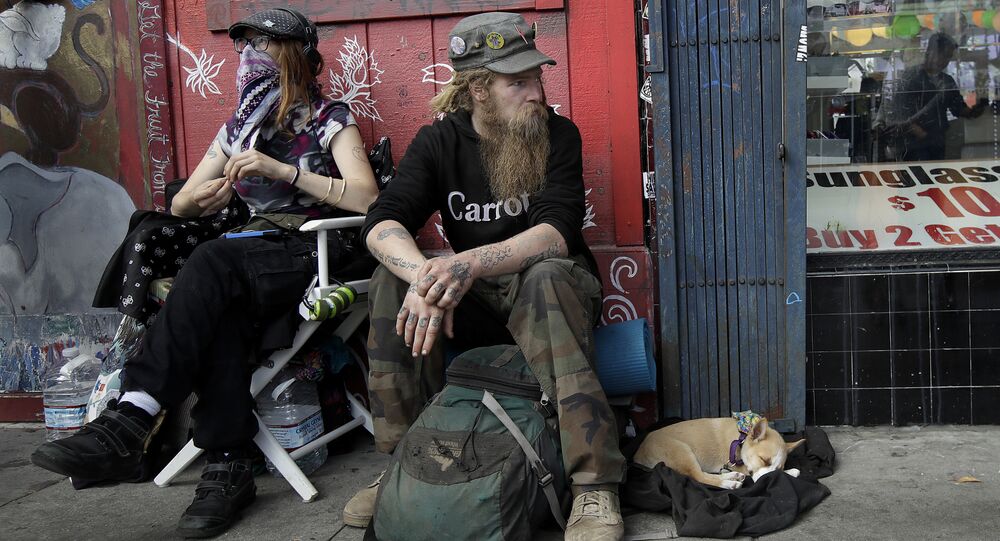 The president and his allies have already had a field day attacking the Democratic House speaker over security cam footage showing her getting her hair washed and blow-dried at a beauty parlour, mask-free, despite regulations in her district which shuttered salons to mitigate the impact of the coronavirus pandemic.

Students for Trump, a political youth group affiliated with the Turning Point Action political action committee, has posted a viral video from the 12th district in San Francisco, California, home district of House speaker Nancy Pelosi, showing major problems with rampant homelessness, drug use, and property destruction in the community she represents.

This is Nancy Pelosi’s district. pic.twitter.com/1yIuFlWdLe

The 3+ minute video features text narration, and begins with the line “Nancy Pelosi does not want you to see this” before proceeding to show the "heartbreaking" state of the district.

The video shows row after row of tents for homeless people in front of boarded up businesses, and points out that Pelosi has been in power for 33 years. At one point, a “Go Vote” sign can be seen hanging from a local business owner’s window, just several meters away from a tent. Another moment shows a fire hydrant with a custom-fitted hose to allow the homeless people to take showers.

Footage taken at the Federal Office Building shows ‘United States of America’ crossed out with black spray-paint, and ‘George Floyd’, ‘BLM’ (Black Lives Matter) and ACAB (All Cops Are Bastards) written on its walls and windows.

The video concludes with a photo of Pelosi kneeling with other congressional leaders following George Floyd’s May 25 killing in Minneapolis, along with the word “Shame” Written over it.

Republicans have already been on the attack against the 80-year-old congresswoman, who was recently filmed on a security camera getting her hair washed and blow-dried at a salon despite regulations preventing parlours from providing indoor services. The salon’s owner released the footage, saying he wanted to show the politician’s ‘hypocrisy’ for setting one standard for herself and another for everyone else amid the pandemic. Pelsosi confirmed that the footage was authentic, but said she felt “set up” and has asked the salon to give her an apology.

© AFP 2021 / LEAH MILLIS
Trump on Pelosi Salon Row: 'Does Anyone Want a Speaker of the House Who Can be So Easily Set Up?'
President Donald Trump, who has had a famously bad relationship with Pelosi, particularly over her party’s efforts to impeach him last year, has repeatedly attacked the congresswoman over the “horrible shape” that her city is in. Last October, Trump blasted Pelosi and said San Francisco was “in violation of many sanitary and environmental orders” and urged her to “work on this mess and turn her district around” instead of spending her time trying to impeach him.

Last year, Trump told San Francisco city leaders that “we can’t have our cities going to hell” and asked them to “lean it up.”

The US has faced a major spike in homelessness and poverty in recent years, particularly in the wake of the Great Recession beginning in 2007-2008. About 567,000 people were confirmed homeless in 2019, although it’s thought that the actual number is much higher due to the difficulty of tracking people living off the grid with no fixed address. Authorities in cities across the country have also braced for a spike in homelessness in the coming months as eviction freeze orders issued in the wake of the coronavirus crisis run out.