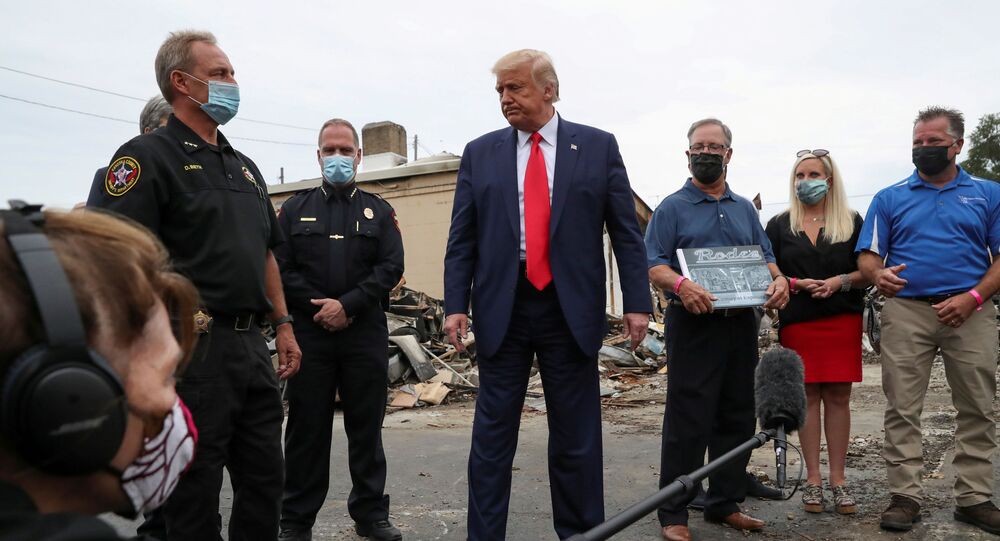 Kenosha, Wisconsin became the latest flashpoint in racial tensions in the United States after a white police officer shot Jacob Blake, a black man wanted on sexual assault charges who was left paralised as a result. Riots erupted in response to the shooting last week, and two people we killed during the unrest.

Donald Trump has visited Kenosha, a city at the epicentre of the election campaign, to push forward his message of “law and order”.

Trump arrived in the Wisconsin city on Tuesday, nine days after often-violent protests flared up over the police-involved shooting of Jacob Blake.

Democrats have warned Trump against coming to Kenosha over concerns that the outspoken president could aggravate racial tensions in the city.

“Fires are burning, and we have a president who fans the flames rather than fighting the flames,” Democratic presidential candidate Joe Biden said on Monday, while Wisconsin Governor Tony Evers wrote to Trump, “I am concerned your presence will only hinder our healing.”

Trump defied the alarmism, arguing that the trip “could increase enthusiasm and it could also increase love and respect for our country.”

Here are the key takeaways from the visit.

On Tuesday, Trump doubled down on Nixon’s 1968 strategy of pitching himself as the law-and-order president, as opposed to Democrats who, in his view, neglect public safety.

He toured a section of Kenosha damaged by rioting last week, including the remains of a family-owned furniture store and a camera shop which were nearly entirely burnt to the ground during the riots last week.

He promised to help the owners and lamented that mayors and governors do not ask for federal law enforcement aid immediately to calm the unrest.

“The ultimate example is Portland. It’s been terrible for a long time — for many decades, actually,” he said. “But you take a look what’s been happening for the last 94 days. We would put it out within one hour. It would take one hour, maybe less. And that’s really what happened here.”

Trump also visited an emergency management centre, where he backed police officers and the National Guard troops who had helped handle the riots.

The president has not met with the family of Jacob Blake. He said he was going to have a conversation with Blake’s mother on Monday, but refused after it emerged that she wanted lawyers to be on the call.

During a roundtable at the same centre later that day, also attended by Attorney General Bill Barr, Trump did not once mention Blake.

Instead, he stressed that the Kenosha demonstrators burned down buildings, damaged two dozen businesses, and threw bricks at police officers. “These are not acts of peaceful protest, but really domestic terror,” he added.

Trump said he condemns anti-police rhetoric and appeared to play down police brutality, as mistakes made “under tremendous pressure”. In a Fox News interview on Monday, the president said police officers “choke just like in a golf tournament. They miss a 3-foot putt.”

In Kenosha, he also pledged to provide $1 million to city law enforcement and $4 million in aid to the small businesses ravaged during the unrest. Another $42 million will go to support public safety statewide.

When asked whether he had a message to the Blake family, Trump said: “I feel terribly for anybody that goes through that.” He added that he had heard Blake’s mother was “a fine woman” and that the shooting was being investigated.

On the eve of the trip, the president defended Kyle Rittenhouse, the 17-year-old who killed two protesters in Kenosha and injured one with a semi-automatic rifle last week.

Trump cited cell phone footage of the incident, saying that Rittenhouse was acting in self-defence because the protesters “violently attacked” the teen and he “probably would have been killed”.