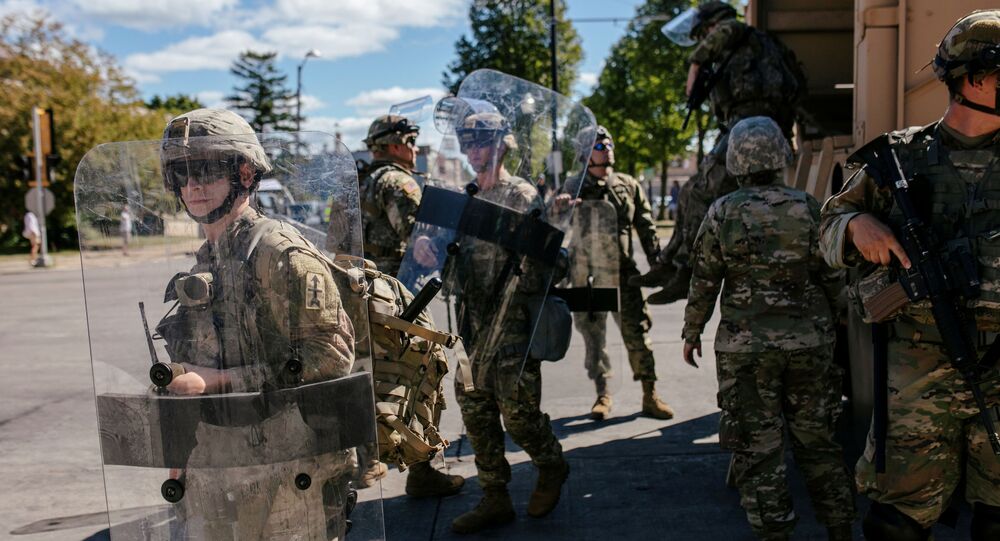 The president doubled down on his plans to visit riot-hit Kenosha, Wisconsin on Monday. The city of 99,000 was engulfed in protests, rioting, and arson after the August 23 repeated shooting by police of a 29-year-old black man allegedly armed with a knife after an arrest went wrong.

Donald Trump’s visit to Kenosha to survey damage and confer with local law enforcement is a risky move politically so close to the election, but gives him a chance to turn his Democratic opponents’ rhetoric blaming him for the protests against them, veteran Michigan-based Republican consultant John Truscott believes.

“While I wouldn’t advise going into a situation like this due to the uncertainty of what will happen, it is an opportunity to flip the Biden narrative back on him,” Truscott said in an interview.

“The Democrat playbook has dictated that everyone blame the looting and violence on the President. However, I think voters are smarter than that and know where the blame should fall. The President will blast the Democrats for blaming him for their own failure to contain the violence. The media will jump all over him for doing so and that will provide yet another opportunity for him to call out the fake news and the bias on the part of the networks,” he added.

Democrats Tell Trump to Stay Away

The White House announced Trump’s plans to visit Kenosha on Sunday. Wisconsin’s Democratic Governor Tony Evers expressed concern with the visit, writing the president an open letter urging him to “reconsider” his plans. Evers argued that the trip could hinder local authorities efforts to ‘heal’ the city following the riots resulting from the August 23 shooting of African American Jacob Blake seven times in the back by a white police officer during a response to a 911 call about a domestic incident.

Democratic presidential nominee Joe Biden attacked Trump ahead of the trip, suggesting Monday that the president had “forfeited” his “moral leadership in this country,” and was unable to “stop the violence because for years he has fomented it.”

But Republicans and some non-partisan observers have criticized the Democrats over their claims.

“For the past four years there's been blatant hypocrisy and a double standard applied by Democrats towards every action and inaction made by President Trump,” says Sarah Abed, an independent journalist and political commentator.

“There is absolutely nothing that the Trump administration can do to appease their political rivals. Trump's insistence on visiting Kenosha on Tuesday to survey damage, visit an emergency operations center, and host a round table discussion on Wisconsin community safety, are all normal things that any president would be expected to do, but for those who have never accepted Trump as their president, the same rules do not apply,” she suggests.

Abed points out that although some Kenosha leaders have expressed concerns about Trump’s visit, others, including the seven Kenosha County Board supervisors who sent him a letter encouraging him not to cancel the trip, feel otherwise.

“In their letter, they stated that Trump's leadership is greatly appreciated during this time of crisis by those devastated by the violence. What this country needs right now is for adults to act with reason, love, compassion, understanding and unbiased logic and not fall victim to division, political games, violence, and chaos. Many are worried that we're heading towards a civil war, things must change right now before it's too late,” Abed warns.

On Monday, Trump boasted that he made the right call in sending National Guard forces to quell the violence in Kenosha, tweeting that if he had not sent them, “there would be no Kenosha right now.”

The Kenosha protests have led to the shooting deaths of two protesters and the injury of a third by a civilian armed with an AR-15-style rifle. At least one police officer and one firefighter have also been injured, and about $2 million in damage to city-owned property has been caused.

Trump refused to condemn the shooter, 17-year-old Kyle Rittenhouse, at a press conference on Monday, saying he was defending himself against violent protesters. Rittenhouse has been charged with first-degree murder, with all three of his victims appearing to have criminal records.