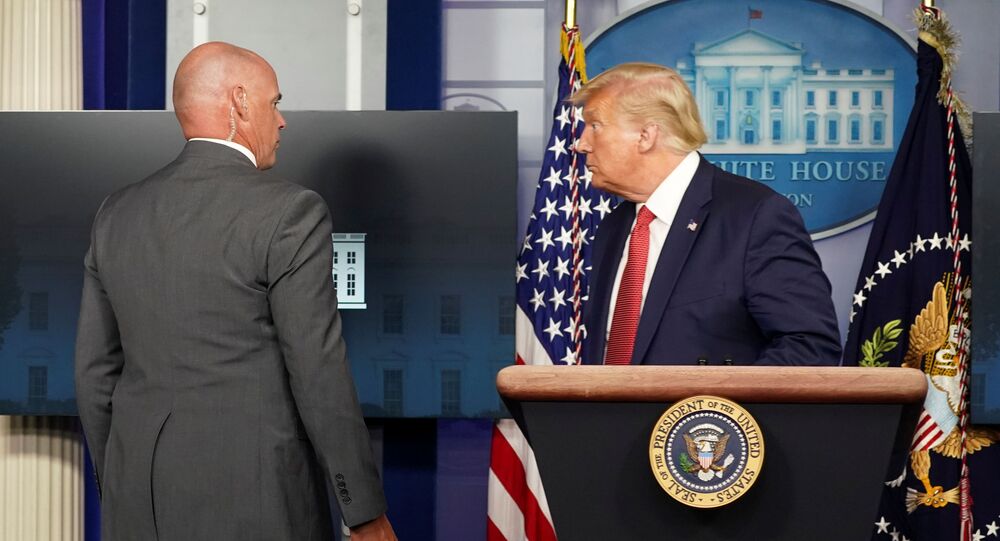 'Shooter' That Had Trump Escorted From Press Briefing Said to Be 'Armed' With Comb, Court Docs Show

Earlier in the month, US President Donald Trump was urgently escorted away from a press briefing at the White House by Secret Service, due to what was at the time described as a shooter alert on the premises. The incident was reported to have left the "shooter" and a Secret Service agent injured and hospitalized.

A man, who earlier in the month approached a Secret Service agent in the area surrounding the White House and claimed that he was armed, was apparently holding a comb, The Washington Post reported, citing new court documents.

According to the documents, a black object fell from the hands of the so-called gunman, Myron Berryman, after he was shot by the USSS agent. The comb was found at the scene, and the officer who shot Berryman said afterwards that he realized that the man did not have a gun. The court documents revealed that other officers present at the scene told investigators that the officer who shot Berryman said "I think it was a comb".

Two unnamed officials familiar with the police report of the incident told WaPo that Berryman shouted “I’m going to kill you. I’m going to shoot you" - something not mentioned in the officially released documents.

His lawyer insisted Berryman did not threaten to kill anyone during the incident. The next hearing has been scheduled for January.

The report noted that Berryman was transferred to a psychiatric hospital. According to the documents, cited by WaPo, he was interviewed there, and told the officers that he had been diagnosed with schizophrenia, and had left the medical facility he stayed in on the day of the shooting. He also outlined that he did not remember the incident.

Earlier in August, the so-called shooting incident confirmed by the Secret Service forced agents to escort US President Donald Trump from his press briefing. Later it was said that the incident did not pose a threat to POTUS.

According to initial documents describing the event, Berryman approached a uniformed officer at his post on the west side of the White House and said he was armed, prompting the agent to shoot him in the torso. The officer, whose name was not disclosed, was not injured.