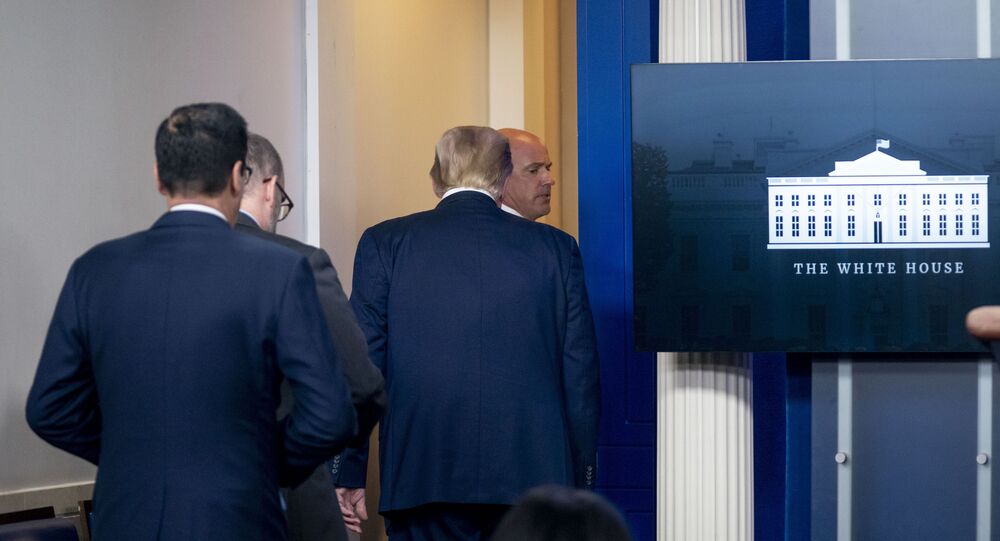 During a news conference at the White House on Monday, US President Donald Trump was suddenly whisked away by Secret Service agents and the conference abruptly ended without explanation.

Just a few minutes into Trump's daily briefing, as he was discussing recent economic gains, Secret Service suddenly ended the news conference and pulled the president, as well as the officials intended to partake in the briefing, back into the hidden passage behind the briefing room.

"There was a shooting outside of the White House," Trump later explained. "Always quick and very effective work … there was an actual shooting … someone has been taken to the hospital … shot by Secret Service​."

Reporters in the White House pool posted on social media that the doors had been locked and camera crews outside the windows had been rushed off as well.

​NBC reported a Secret Service agent had shot at a person in Lafayette Park near 17th Street. It was unclear why the person had been shot. Trump said a fuller briefing on the incident would come from law enforcement later.

"You were surprised. I was surprised also. I think it's pretty unusual," Trump joked with reporters after returning to the briefing room a few minutes later. "It might not have had anything to do with me."

“I don’t think the person breached anything; it was on the outside grounds. I don’t believe anything was breached," Trump said. "They were relatively far away.”

Additional video footage shared on Twitter manages to capture the exact moment that gunshots were fired near the White House grounds.

An update issued by the US Secret Service confirms that the incident unfolded near 17th Street and Pennsylvania Avenue, and that an investigation into the incident is still ongoing.