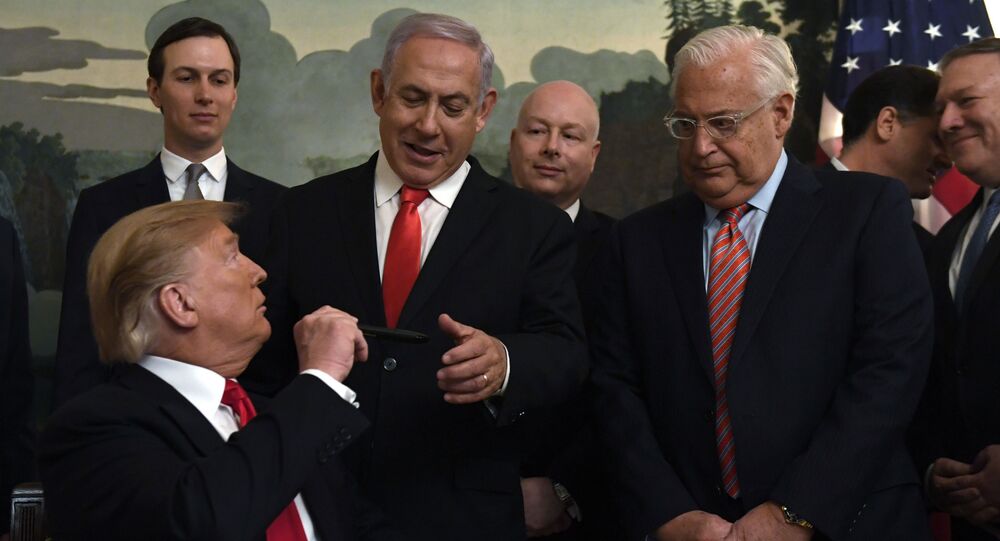 Mediated by the United States, the deal envisaging a normalisation of relations between the United Arab Emirates and Israel was announced earlier in the day in a joint statement by the three countries.

The talks between the United Arab Emirates and Israel were arranged over a year before the deal was reached, Axios reported, citing unnamed White House officials. Negotiations were fueled by Tel Aviv's plans to extend its sovereignty over additional areas of the West Bank under Donald Trump's "deal of the century".

"We have been talking to both sides for 18 months but the annexation issue created the atmosphere which was conducive for getting a deal", an unnamed US official told Axios.

One of the most important developments, according to the report, was an op-ed in the Israeli media in which UAE Ambassador Yousef Al-Oteiba insisted that Tel Aviv choose between normalisation of relations in the Gulf or its planned sovereignty extension.

In late June, Al-Oteiba put forth a suggestion to Trump senior adviser and son-in-law Jared Kushner and White House envoy Avi Berkowitz, saying that Abu Dhabi was ready to establish ties with Israel if Tel Aviv dropped its "annexation" plans, and the idea was reported to have been welcomed by both.

During talks with Israeli PM Benjamin Netanyahu, the White House noted that if Israel wanted to move ahead with the West Bank plans, it should also "take steps supported by the Palestinians", citing transferring control of 5-10 percent of the West Bank.

Netanyahu was allegedly "upset" by the suggestion, while the Trump administration realised that the recently-formed coalition government of the Jewish state was divided over the West Bank issue, as Defence Minister Benny Gantz, along with Foreign Minister Gabi Ashkenazi, were not eager to act immediately.

Then, an alternative to sovereignty extension was proposed by Berkowitz, who revealed that the UAE had offered normalisation in exchange for halting the "annexation" plans. After Netanyahu agreed to review the proposition, an agreement between Crown Prince Mohammed Bin Zayed and Kushner and Berkowitz was reached, unbeknownst to Gantz and Ashkenazi.

Wednesday saw a finalising of the deal via a conference call described by Trump as "like love".

However, after the joint statement to announce the agreement came out, Netanyahu noted that "annexation plans are still on our tables", stressing that the suspension of extending Israeli sovereignty over portions of the West Bank was only temporary.

Drawing mixed reaction, particularly from the Palestinians, the deal, named the "Abraham Accord", envisages the normalisation of relations between the Jewish state and the United Arab Emirates, in exchange for Tel Aviv halting its plans to take over additional parts of the West Bank.

Trump expects to hold a signing ceremony soon, with officials from the two countries attending, as Israel and the UAE are to continue talks over establishing diplomatic ties, opening direct flights, and signing several agreements on investment, communications, technology, and other issues.

"I look forward to hosting them at the White House very soon to formally sign the agreement, we'll probably be doing it over the next, I would say, three weeks", Trump said on Thursday.

According to Kushner, the United States will seek to encourage more Arab countries to take steps towards a normalisation of relations with Israel.

Kushner After Israel-UAE Agreement: 'Another Country Could Make Deal’ With Tel Aviv in Coming Days