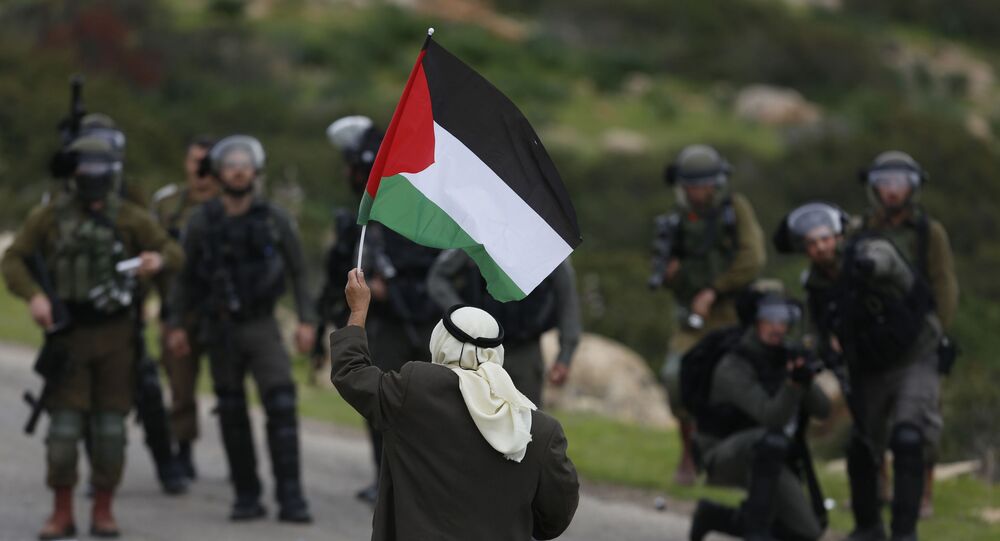 Earlier in the day, the three countries announced in a joint statement that a deal under the name "The Abraham Accord" has been brokered by the United States. The deal envisages Israel and the United Arab Emirates establishing diplomatic ties, and Tel Aviv dropping its plans to extend its sovereignty over new territories in the West Bank.

"The Palestinian leadership announces its strong rejection and condemnation of the trilateral agreement to normalize relations between Israel and the UAE, mediated by the United States," the statement said.

It also outlined that the PNA "views this step as an attempt to undermine the Arab peace initiative and the Arab League decision", naming it "an aggression against the Palestinian people".

The PNA called for an emergency session of the Arab League and the Organisation of Islamic Cooperation, demanding that the trilateral agreement to be rejected.

According to a separate statement made by the Foreign Affairs Minister of the PNA, Riyad Al-Maliki, the Palestinian ambassador to the UAE has been recalled following the joint statement from the three countries on their agreement.

"Based on the instructions of President Mahmoud Abbas [...] and following the trilateral statement by the US, Israel and UAE, to normalize Israeli-Emirati relations, the Palestinian ambassador was summoned from the UAE immediately," the Foreign Ministry tweeted.

The Palestinians' disagreement with the trilateral deal was echoed by Yemen's Foreign Minister, Mohammed al-Hadrami.

"Our position in the Republic of Yemen will remain consistent and will not change regarding the Palestinian cause and the rights of the brotherly Palestinian people - which are inalienable - on top of which is the establishment of an independent state with Al-Quds Al-Sharif as its capital," al-Hadrami said in a statement.

Hamas also expressed their rejection of the deal, naming it a "stabbing in the back of [Palestinian] people". Tehran noted that the United Arab Emirates had made a "strategic mistake" by agreeing to normalize relations with Tel Aviv.

"UAE's new approach for normalizing ties with fake, criminal Israel doesn't maintain peace & security, but serves ongoing Zionists' crimes. Abu Dhabi behavior has no justification, turning back on the Palestine cause. With that strategic mistake, UAE will be engulfed in Zionism fire", Hossein Amir Abdollahian, senior adviser to the Iranian parliament speaker in charge of international affairs, tweeted.

Some countries, including Egypt and several European countries, welcomed the trilateral deal. The Egyptian president praised the agreement for "efforts to achieve prosperity and stability for our region".

Austria said that the deal is "a sign of calming in the Middle East", while UK Foreign Secretary Dominic Raab described the agreement as a "historic step which sees the normalisation of relations between two great friends of the UK".

The trilateral deal was also welcomed by UN Secretary-General António Guterres, who saw it as promoting "peace and security in the Middle East region".

Earlier in the day, the United States, Israel and the United Arab Emirates announced in a joint statement that they had reached a deal, dubbed "The Abraham Accord", which envisages the groundwork for a normalization of relations between Israel and the UAE, along with Tel Aviv dropping plans to extend sovereignty over additional territories in the West Bank.

Shortly after the deal announcement, however, Israeli PM Benjamin Netanyahu said that "the annexation plans remain on our tables", stressing that implementation of these plans would be carried out in contact with the United States, which, according to the PM, had only "asked Israel to wait".

Tel Aviv ambitions to extend sovereignty over more sections of the West Bank fall in line with Trump's so-called "deal of the century", which was highly criticized and rejected by the Palestinians, as well as multiple European countries, along with the UN and the UK leadership.

Initially, Tel Aviv announced that it would take over an additional 30 percent of the West Bank, planning to start the sovereignty extension by 1 July.

Kushner After Israel-UAE Agreement: 'Another Country Could Make Deal’ With Tel Aviv in Coming Days