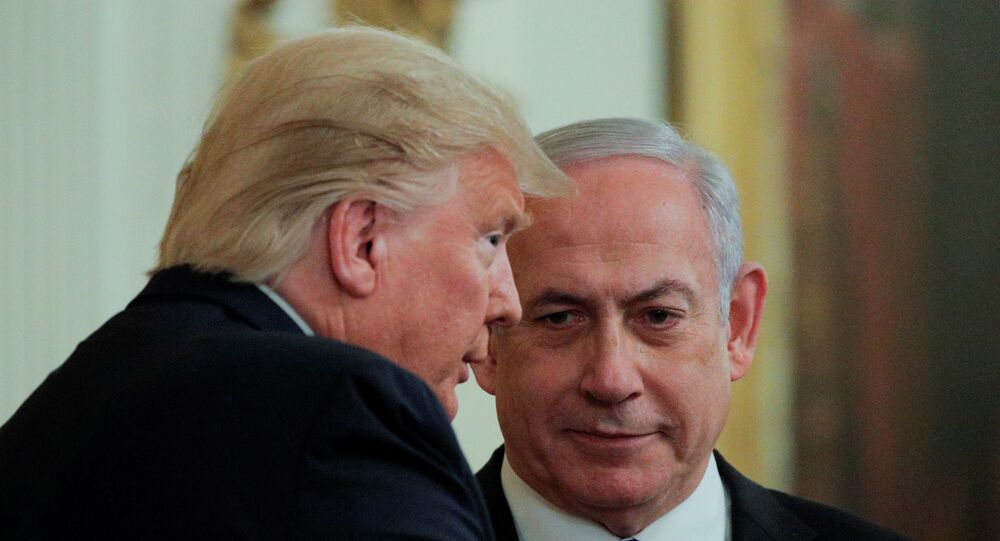 Apart from the UAE, Egypt and Jordan are the only Arab countries that have reached a peace agreement with the Jewish state, although it maintains official as well as reportedly unofficial ties with other regional powers.

US President Donald Trump has announced that Israel and the United Arab Emirates have reached an agreement to establish full diplomatic ties in exchange for Tel Aviv halting its West Bank plans, which Israel’s Prime Minister Benjamin Netanyahu had long promised to carry out.

The Israeli prime minister later clarified that the extension of Tel Aviv's sovereignty over the West Bank territories is not completely off the table, but requires support from the United States in order to proceed. Netanyahu noted that it was Trump who asked Tel Aviv to suspend the implementation of these plans.

Trump published the full text of the joint statement of Israel and the UAE on the deal on his Twitter account.

Joint Statement of the United States, the State of Israel, and the United Arab Emirates pic.twitter.com/oVyjLxf0jd

The statement explained that Tel Aviv chose to suspend declaring sovereignty over the parts of the West Bank that were marked for appropriation by Israel under Trump's “deal of the century”, and instead focus on "expanding ties with other countries in the Arab and Muslim world".

The joint communique also detailed that as a result of the "historic diplomatic breakthrough", the delegations of Israel and the UAE will meet to discuss a variety of bilateral agreements, extending beyond just establishing mutual embassies. They will also discuss cooperation in the areas of investment, tourism, direct flights, security, telecommunications, technology, energy, healthcare, culture, and the environment, the joint statement says.

By reaching the agreement with Israel, the UAE has become the third Arab country to establish full diplomatic ties with the Jewish state, in addition to Egypt and Jordan, but is the first among the Gulf States to do so. Israeli Ambassador to Washington Ron Dermer praised the role of President Donald Trump in achieving the major diplomatic breakthrough for Tel Aviv.

A great day for peace! Israel commends the courage of MBZ for the historic decision of the UAE to join Egypt (1979) and Jordan (1994) in making peace with Israel. Israel deeply appreciates all @POTUS Trump has done to make this breakthrough possible. More to come!

The agreement to establish diplomatic ties between the UAE and Israel has received high praise from the president of Egypt – one of the few Arab states that maintain relations with Israel on an official level. President Abdel Fattah Al-Sisi supported the deal between the two countries and hailed the fact that it allowed the annexation of the Palestinian territories in the West Bank to be halted.

"I value the efforts of those in charge of the deal to achieve prosperity and stability for our region", Sisi stated.

UN Secretary-General António Guterres has welcomed the normalisation of relations between Tel Aviv and Abu Dhabi as an initiative promoting "peace and security in the Middle East region", the international body's spokesperson said. UK Prime Minister Boris Johnson has also welcomed the signing of the agreement as a piece of "hugely good news" for the region.

"It was my profound hope that annexation did not go ahead in the West Bank and today’s agreement to suspend those plans is a welcome step on the road to a more peaceful Middle East", Johnson said.

Despite the UAE stating that the country pursued the deal in order to tackle the threat to the two-state solution to the Israeli-Palestinian conflict posed by the looming annexation of territories in the West Bank, not everyone believed this. A prominent member and a negotiator for the Palestine Liberation Organisation, Hanan Ashrawi, stated that the Palestinian Authority would not be a "fig leaf" for Abu Dhabi’s alleged attempt to formalise its purported secret ties with Tel Aviv.

Hamas was not happy about the diplomatic agreement either, calling the signing of it a "stabbing in the back of [Palestinian] people" and a "reward for the Israeli occupation". The Gaza-based group further disputed the UAE's statements regarding the deal's value for the Middle East peace process, arguing that it "does not serve [the] Palestinian cause". A representative of the Fatah party in the PA called the accord a "betrayal" of Arab countries and the Palestinian Authority by the UAE.

Major Political Gain for Trump Ahead of Election?

The announcement of the deal comes less than three months ahead of the November presidential election in the US, in which POTUS is currently polling behind his Democratic opponent, former Vice President Joe Biden. Apparently brokered by Trump himself, the agreement between the two countries may be seen domestically as a significant foreign policy gain for the president.

Following the signing of the bilateral agreement between Israel and the UAE, Trump expressed confidence that the 13 August deal is not the last for Israel and added that he expects more Arab states will normalise their ties with Tel Aviv in the future.