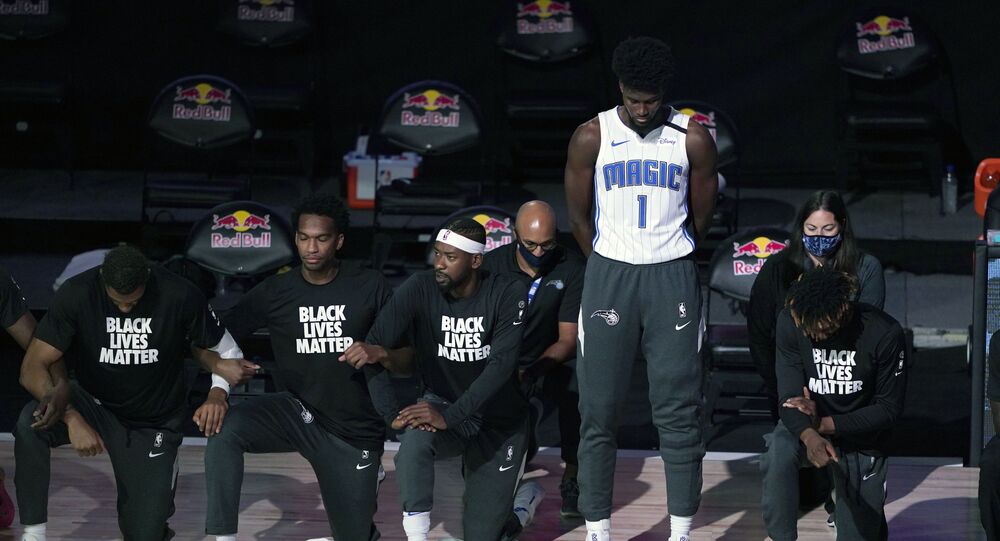 Taking the knee during the national anthem is commonly equated with protests against cases of police brutality and racial injustice with American Football quarterback Colin Kaepernick beginning the trend back in 2016.

Basketball player and ordained minister Jonathan Isaac became the first NBA star to not kneel during the national anthem since the league resumed on Thursday.

The Orlando Magic forward, who is black, was also the only player to not wear a “Black Lives Matter” shirt. He instead chose to wear his Magic game jersey.

During the televised broadcast, Black is seen standing, while players and coaches from both teams took a knee during the national anthem.

Isaac explained why he didn’t join in with his team mates saying: "I do believe that Black lives matter, I just felt like it was a decision I had to make, and I didn't feel like putting that shirt on."

"I don't think that kneeling or putting on a T-shirt for me, personally, is the answer," he added.

"We're all supporting each other in this, and if guys are not comfortable kneeling and they want to stand, nobody has a problem with that."

"I support him. His team-mates support him. The organisation supports him. That's part of living in our country,” he said.

Basketball writer Dane Moore wrote on Twitter that he was “very curious” to hear the NBA player's explanation.

I’m very curious about — and will be patient for — Jonathan Isaac’s explanation here.

Standing for the anthem is one thing...

But seeming to be intentional about *not* wearing a Black Lives Matter shirt.... I dunno, man... pic.twitter.com/CFBJ98tOKG

​Jemele Hill, a writer for Atlantic said she respected his decision but didn’t understand how it related to Jesus.

I listened to his response a few times and I don’t follow at all.

He has every right not to kneel or join the protest, but his answer literally didn’t make any sense. Black Lives Matter is a human rights campaign, so how would fighting for equality contradict Jesus? https://t.co/i3uvZKxRNT

​Another user questioned his reason for not wearing the “Black Lives Matter” shirt.

So apparently Jonathan Issac didn’t kneel for religious reasons but what’s the reason for not wearing a blm shirt?

​The kneeling trend was started in 2016 by quarterback Colin Kaepernick. He first sat and later started to kneel down during the national anthem despite it being traditional to stand during the national anthem. Kaepernick's gesture was meant as a protest against ongoing racism and violence against African Americans in the United States. Nowadays, the action is commonly equated with protests against cases of police brutality and systemic racism.