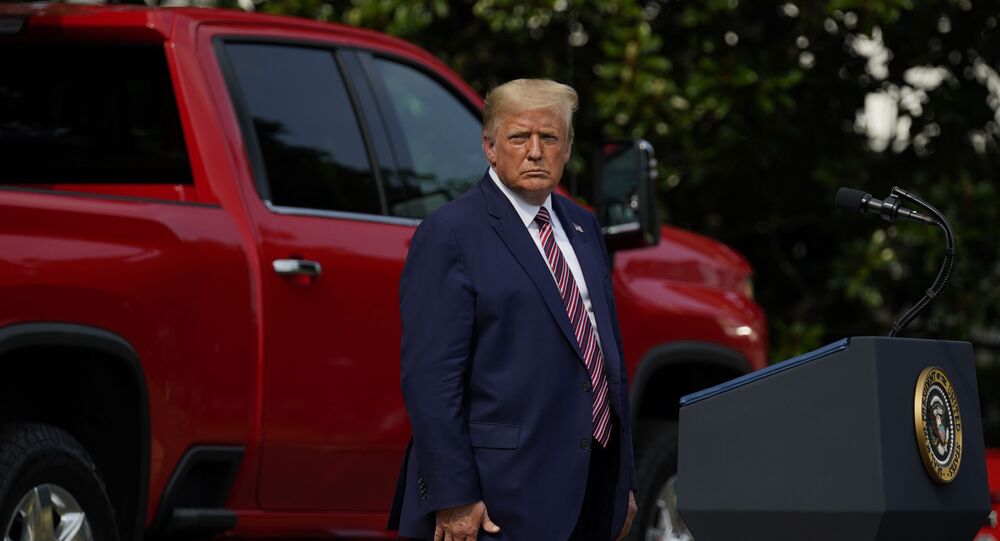 Throughout his life, 71-year-old John Bolton has served in four Republican administrations in top official positions. After leaving the Trump administration, the former national security adviser rolled out a tell-all book 'The Room Where It Happened', criticizing Trump's decision-making on foreign policy.

In light of allegations cast by media reports that Trump was tough with such female leaders as German Chancellor Angela Merkel and former UK Prime Minister Theresa May, Bolton pondered on possible "increased difficulty" in relations between the president and women in high political positions. He said that Trump's ties with Merkel and May were "two of the most difficult" that he saw.

"I think there's an element of increased difficulty with female foreign leaders. But with Merkel, it's kind of complicated - the president's father was German, so that might have something to do with it", Bolton told Spiegel.

He argued, however, that there are also "political reasons", referring to US-EU trade relations as "a major source of controversy" between Washington and Berlin, and Germany's reluctance to spend 2 percent of GDP on defence, as NATO non-binding agreement suggests.

When asked by Spiegel whether Trump might have problem with women in general, Bolton agreed that it "might be a factor", but added that the president also has problems with "a lot of democratically elected leaders" regardless of their gender.

"..[] He seems to have better relations with authoritarian figures than with many who are elected in democratic countries", Bolton implied.

Elaborating on Trump's "difficulties" in international affairs, Bolton claimed that they root from his "lack of any philosophical basis". He noted that Trump is neither conservative Republican, nor liberal Democrat, or anything in between.

"Part of Trump's difficulty with international affairs is his lack of any philosophical basis. He has no philosophy. That was a complicating factor across the board. I am a conservative Republican. He is not. But he's not a liberal Democrat, either. He tends to confuse personal relationships with foreign leaders with the underlying bilateral relationship between the US and that country", Bolton said.

Trump has changed his political affiliation several times, starting as a Republican, then switching to the Independent Party of New York and even turning at one point to the Democratic party. In September 2009, he returned to the GOP.

Commenting on "efforts to understand and define Trump Doctrine", Bolton suggested observers "stop wasting time" as there is no such thing. He noted that, with Trump, "the decision you get in the morning on an issue could be different in the afternoon, largely dependent on political considerations".

"He's capable of almost anything. But this is an aspect of what we call Trump Derangement Syndrome: Everything, all political analysis, is defined by Trump, by what Trump does or does not do. Analysis stops at that point", Bolton said.

When asked about the Nord Stream 2 project to deliver Russian natural gas to Europe, sparking dispute between the United States and Germany, along with other countries involved, Bolton elaborated on the political and economic sides of the issue.

He agreed that it is a combination of "concerns that Germany and Europe could grow overly dependent on Russia" and "American hopes to sell American natural gas to Europe".

"He talked about imposing sanctions all the time, but he never has. I think it would have stopped the pipeline. And it's not finished yet. It may yet be stopped. It is strategically damaging to Europe and the United States", he said.

Recently, US Secretary of State Mike Pompeo, a Trump appointee, warned that Washington plans to put companies working on Nord Stream 2 on the list of projects that can be sanctioned by the US. Sanctions, both enforced and promised, have been met with great criticism in Germany and denounced as interference in EU's energy sovereignty.

Bolton asserted that Trump is "primarily interested in his re-election", while the former national security adviser stands against the idea of Trump remaining in the Oval Office for a second term.

"I am afraid the influence of authoritarian leaders could grow in a second term", Bolton said, describing his biggest fear over Trump's potential re-election.

He did not discard Trump's chances to remain in office, referring to the 2016 elections.

"He's way behind now – in large part, because of the coronavirus pandemic and the economic consequences. But the polls in 2016 showed him behind as well. There was a universal consensus on Election Day, including in Trump campaign headquarters, that he was going to lose. In my view, we should never underestimate the ability of the Democratic Party to blow an election", he said.

In the upcoming November elections, Trump will most likely face the presumptive Democratic nominee Joe Biden, and polls currently show that POTUS is 11 points behind his rival.