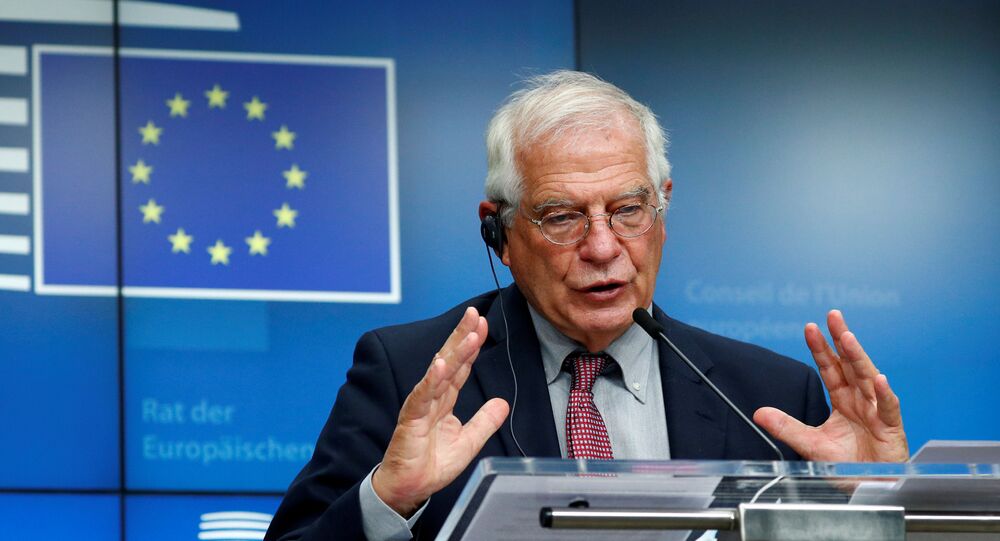 The Nord Stream 2 gas pipeline project has long faced criticism from the United States, as the Trump administration threatened to pressure companies involved in its manufacture with sanctions. Warnings from the White House, however, have been considered by German business as interference into EU energy sovereignty.

The European Union opposes "the use of sanctions by third countries on European companies carrying out legitimate business", Vice-President of the European Commission Josep Borrell said in a statement, referring to the practice of the Trump administration in threatening or using sanctions to target "Iran, Cuba, the International Criminal Court and most recently the Nordstream 2 and Turkstream projects."

"Moreover, it considers the extraterritorial application of sanctions to be contrary to international law. European policies should be determined here in Europe not by third countries", the statement said.

​Borrell expressed his concerns over the "growing use of sanctions, or threat of sanctions" by the Trump administration toward European "companies and interests", particularly referring to the Nord Stream 2 project, that envisages a pipeline carrying Russian natural gas to Europe.

Recently, officials in the Trump administration announced plans to put companies working on Nord Stream 2 on a list of projects to be sanctioned by the US.

Borrell stressed the importance of "coordination of targeted sanctions with partners" in the areas where "common foreign and security policy goals are shared".

"We have seen many positive examples of this and will continue to coordinate where we can. Where policy differences exist, the European Union is always open to dialogue. But this cannot take place against the threat of sanctions", he said.

​Threat of Sanctions Against Nord Stream 2

Nord Stream 2 first faced US sanctions in December 2019, when the White House imposed them against companies involved in the project, causing a Swiss pipelaying contractor to exit.

Last month, a group of US Senators introduced legislation titled "Protecting Europe’s Energy Security Clarification Act of 2020", envisaging new sanctions against Nord Stream 2 and companies that work on the project. The move was met with condemnation in Germany, as Chancellor Angela Merkel slammed the new extraterritorial sanctions as "law defying". Russian Energy Minister Alexander Novak described the sanctions as "interference in the affairs of independent and sovereign states by a third party".

On 15 July, US Secretary of State Mike Pompeo announced plans to put companies working on Nord Stream 2 on a list of projects to be sanctioned under the Countering America's Adversaries Through Sanctions Act (CAATSA) legislation. German businesses denounced the decision as "interference into the European Union's energy sovereignty".

Russia's Security Council Deputy Chairman Dmitry Medvedev, commenting on new threats toward Nord Stream 2, said that the project will be completed despite the "wailing of US friends."

Russian Foreign Ministry spokeswoman Maria Zakharova compared the move with a "Cold War movie", noting that "the United States has no other arguments on the international agenda than sanctions".

The project is aimed at creating a pipeline that will transport natural gas from Russia to Europe, passing through the territorial waters and/or the exclusive economic zones of Russia, Finland, Sweden, Denmark and Germany. The goal of the Nord Stream 2 is, in particular, to increase competition within Europe by delivering less expensive Russian gas, thus providing an alternative to imports of liquified natural gas.

The company is based in Switzerland and is owned by the public joint stock company Gazprom. The Nord Stream 2 project involves multiple shareholders, among which are the energy companies Dutch Shell, Uniper, Wintershall and Engie.

The construction of Nord Stream 2 was begun in 2018, seven years after the first leg of the Nord Stream was opened.

Nord Stream 2 Gas Pipeline Project Will Be Completed Despite US Wailing, Medvedev Says