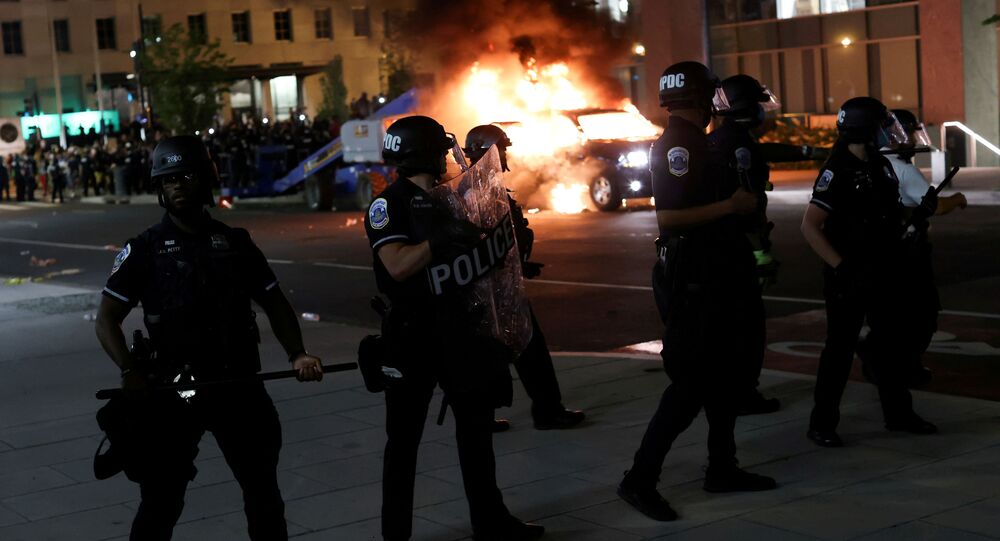 The news follows a warning given by the Department of Homeland Security that personal information of police officers nationwide is being leaked online, including emails, phone numbers and home addresses.

US authorities will investigate interference in police radio communication, government websites and networks used by law enforcement and other government officials during protests over the death of George Floyd, an African-American man, who died in police custody at the hands of a white officer. Authorities did not provide any information on who was behind these disruptions or the way they were carried out, but said they were concerned about the hacking of police communication.

According to the Associated Press, which cites an intelligence assessment produced by the Department of Homeland Security, during protests in Dallas on 31 May, "unknown actors" disrupted the police department’s encrypted radio frequency with music. The document noted such incidents could occur again as demonstrations against racial discrimination and police brutality continue in the United States.

"Short-term disruptive cyber activities related to protests probably will continue — various actors could be carrying out these operations — with the potential to use more impactful capabilities, like ransomware, or target higher profile networks”, the assessment read.

The document also said that a similar incident occurred on May 30 in Chicago, where large demonstrations later turned into riots, which resulted in buildings being burnt, vandalized and looted. Unknown actors interfered in encrypted police radio frequencies. Neither the Dallas nor Chicago police have commented on the incidents, but the deputy director of public safety information technology in the Office of Emergency Management and Communications in Chicago described it as "a very dangerous thing".

Police departments in the United States have been criticized for the decision to switch to encrypted communication, which journalists say may lead to the concealment of safety information from the public. However, police officers say the change is necessary as it protects them from criminals who may listen in to the communication via various applications.

The news follows a warning made by the Department of Homeland Security this week in which the agency said that the personal information of police officers, including phone numbers, emails, and home addresses, has been leaked online.

Police officers and law enforcement agencies have been frequently targeted in cyberattacks in recent years. They range from simple attacks, where passwords from emails are stolen, to serious cyber assaults, which can lead to physical damage or disruption in the work of a police department. Morgan Wright, chief security adviser for the cybersecurity company SentinelOne, said that over the years, police have acquired experience on how to protect themselves from cybercriminals, but noted that hackers have learned new tricks.

"The biggest concern they have right now is the safety of their communities, the safety of their officers. But if you look at what underpins everything we use to communicate, collaborate and operate, it’s all technology”, Morgan Wright, chief security adviser for the cybersecurity company SentinelOne, told the AP.

The development comes as protests against racial discrimination and police brutality continue in the United States. They were sparked by the death of George Floyd, an African-American, who died in police custody on 25 May at the hands of a white officer. The officer, Derek Chauvin, was charged with second-degree murder after he knelt on Floyd’s neck for almost 9 minutes and continued even after the man became unresponsive. Floyd's death sparked outrage among the US public and reignited the debate on racial discrimination not only in the United States but across the world, with various demonstrations held in major European countries.