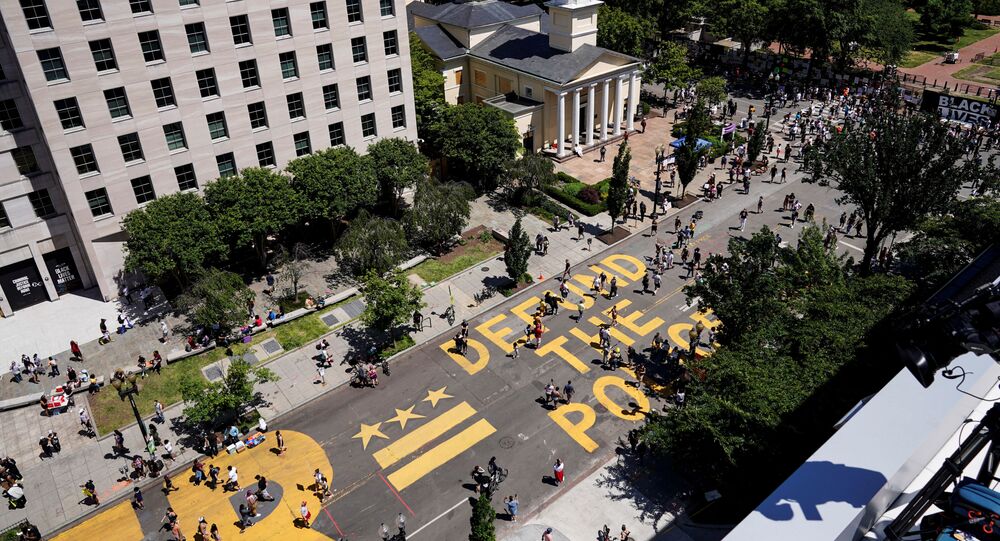 On Monday, the Minneapolis City Council promised to disband the city’s police department, with the nine members making a veto-proof majority to support the decision which comes amid the ongoing protests in the US over the 25 May death of African American man George Floyd at the hands of the police.

Demands by protesters to “defund the police" following George Floyd's death have already caused widespread debates about the meaning of this slogan, which is not only about stripping police agencies of their money but also aims to underscore the necessity of resolving systemic problems pertaining to these agencies.

During a recent interview with NBC, Black Lives Matter co-founder Alicia Garza wondered why “we can’t look at how it is that we reorganise our priorities, so people don’t have to be in the streets during a national pandemic”.

© REUTERS / Andrew Kelly
A New York Police Department officer leans on a barricade on 42nd Street after the 8 p.m. curfew continued Saturday night in response to looting during the Black Lives Matter's protests in the Manhattan borough of New York City, U.S., June 6, 2020

Activists from the group MPD150, in turn, signalled their readiness to work "towards a police-free Minneapolis", an action that they claimed would be more about “strategically reallocating resources, funding, and responsibility away from police and toward community-based models of safety, support, and prevention".

The group wrote on its website that “the people who respond to crises in our community should be the people who are best-equipped to deal with those crises”.

Democratic Senator Cory Booker, for his part, told NBC that Americans are "over-policed", adding that "we are investing in police, which is not solving problems, but making them worse when we should be, in a more compassionate country, in a more loving country".

The same tone was struck by Karen Bass, chairwoman of the Congressional Black Caucus, who said in an interview with CNN that she doesn’t believe it’s necessary to disband police departments but she does think that "in cities, in states, we need to look at how we are spending the resources and invest more in our communities".

According to her, "maybe this is an opportunity to re-envision public safety".

This was echoed by New York City and Los Angeles Mayors Bill de Blasio and Eric Garcetti, respectively, who indicated an intent to cut hefty sums allocated for their police departments' budgets.

The City Council of Minneapolis has, meanwhile, pledged to disband the city’s police department, also vowing to come up with a new community-led system for public safety. Eight of the thirteen council members delivered the statement to the residents of Minneapolis on Sunday.

© AP Photo / John Minchillo
A protester runs past burning cars and buildings on Chicago Avenue, Saturday, May 30, 2020, in St. Paul, Minn. Protests continued following the death of George Floyd, who died after being restrained by Minneapolis police officers on Memorial Day.

The plans were criticised by the Los Angeles Police Protective League (LAPD), which warned in a statement last week that "cutting the LAPD budget means longer responses to 911 emergency calls, officers calling for back-up won’t get it, and rape, murder, and assault investigations won’t occur or will take forever to initiate, let alone complete".

The group cautioned that an intention to defund the police is "the most irresponsible thing anyone can propose at this time, with violent crime increasing, a global pandemic and nearly a week’s worth of violence, arson, and looting".

US President Donald Trump, for his part, also did not mince words when he addressed the topic when speaking at an event in Maine last week.

"They’re saying defund the police. Defund. Think of it. When I saw it, I said, ‘What are you talking about?’ ‘We don’t want to have any police,' they say. You don’t want police?", he noted.

Minneapolis became the starting point for large-scale protests that rocked all 50 US states after African American George Floyd was killed in custody by white police officer Derek Chauvin on 25 May.