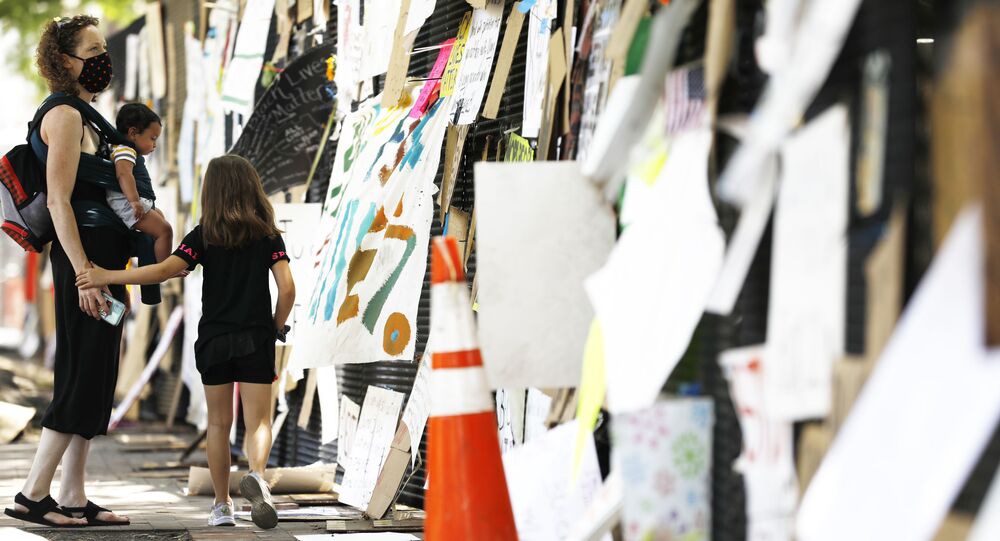 ‘My City Covered in Feelings’: DC Protest Art Reflects Experiences of Those Fighting for Justice

Graffiti art on popular Washington, DC, landmarks and a fence that was erected outside the White House on US President Donald Trump’s orders to keep protesters away has become symbols of the fight against police brutality, artist and activist Billie Krishawn told Radio Sputnik’s Political Misfits Tuesday.

On May 30, following a night of militant protests, buildings and walls across DC were covered with graffiti, especially on the plywood many businesses put over their storefronts after looting was seen in Minneapolis protests. Some featured the words “Fight the Power” with a painting of a black woman, while others included the phrases “Black Lives Matter” and “Am I Next?”

“When I went out that first morning, Sunday, May 31, just to document what it looked like after the protest, I was in awe to see my city covered in graffiti, covered in feelings, covered in paint. It was quite beautiful to see that reflection that reflects back to me on White House property,” Krishawn told hosts Bob Schlehuber and Jamarl Thomas.

However, that same day, crews began cleaning up the streets where the protest had taken place and covering up the graffiti with fresh, white paint.

“The evolution of it is insane … I was also able to bear witness to the erasure of all that happened … I went out and took photos of the aftermath of the White House, as I usually do, and I was met with a lot of white paint, a lot of blackouts, just a general whitewash of everything that had been occurring over the past few days, as well as the Black Lives Matter art that [DC] Mayor [Muriel] Bowser had commissioned,” Krishawn explained, also noting that it was painful to see the erasure of the artwork.

“That art has been a reflection of what we’ve experienced. It has been proof and evidence that we were there on those streets fighting,” Krishawn pointed out.

“These closures are in an effort to maintain the necessary security measures surrounding the White House complex, while also allowing for peaceful demonstration. Security fencing has been erected and the areas are clearly marked,” the release added.

​However, it wasn’t long before the 8-foot-tall fence was adorned with so much art, it would have been difficult to erase it all. Posters, flowers, paintings and photos honoring black people whose lives have been lost due to racial injustice and police brutality decorated the wall until the massive fence was completely covered in artwork.

“And then a few days later … flash forward to when people from all over America came to protest with us, Saturday [June 6] and Sunday [June 7] that wall began to get built [with artwork],” Krishawn noted.

​Workers started removing the fencing around the White House complex on Wednesday, although Secret Service officials have said that other barriers will remain in place ahead of the protests scheduled in the city this weekend.

Last Friday, Bowser also authorized the painting of the words “Black Lives Matter” in bright-yellow, 50-foot letters on 16th Street right in front of Lafayette Square, where tear gas was used to clear protesters away so that US President Donald Trump could have a photo op at the historic St. John’s Church on June 1. Bowser also renamed the area Black Lives Matter Plaza, but the local Black Lives Matter chapter later added “= Defund the Police” to the road after, reflecting the movement’s sharpening political demands.