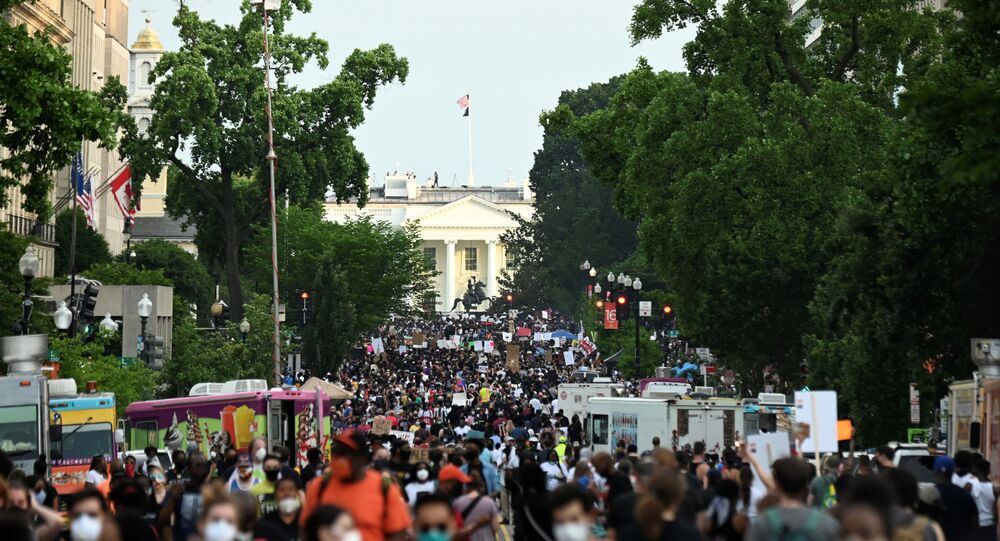 As protests over the death of George Floyd and against police brutality continue across the United States, a portion of a street near the White House has been officially renamed 'Black Lives Matter Plaza' by the administration of Washington DC Mayor Muriel Bowser.

Amid Washington DC streets flooded with protesters, an estimated 3 kilometre (1.7 mile) anti-riot fence, that was erected earlier on Tuesday, has been extended around the White House. Despite the barriers, thick crowds continue to gather around the White House, chanting "Black Lives Matter", singing songs and holding posters.

People continue to arrive at the site, occasionally blocking traffic. The largely peaceful crowds have attempted to proceed as far as the fences now constructed around the White House grounds allow them.

The scene outside the White House right now — or as close as anyone can get, given the massive fencing — where the crowds stretch as thick and as far as I can see.

Absolutely massive crowds in front of and surrounding the White House right now. I haven’t seen anything even remotely like this in my last four days of covering the #GeorgeFloyd protests pic.twitter.com/rUkQgD4XW1

Okay I just walked the entire perimeter of the White House and the Ellipse, the park that abuts the executive mansion.

It’s COMPLETELY fenced in now, a significant addition from yesterday. Analysis from @JakeGodin suggests this is roughly 1.7 miles of fence. pic.twitter.com/VOWZiwd7ga

​The fence has been turned into an improvised art exhibition by protesters with flowers, slogans and pictures.

The 8-foot chain link fence protecting the White House has become a sort of archive / exhibition of the D.C. protests with signs, memorials, flowers and art. pic.twitter.com/mvr0wBkOy6

​Video filmed from the air has revealed that the entire vicinity of the White House is crammed with protesters.

​As people cross the streets, they are followed with loud celebratory music, and many participants are dancing.

Turning on 16th and U going toward the White House

​Protesters also gathered on a part of the street that has been officially renamed Black Lives Matter Plaza by the administration of Washington DC Mayor Muriel Bowser to protest against widespread police brutality in the US and to honor the memory of George Floyd. People can be seen drawing signs and play drums at the site.

​Bowser herself took part in the demonstrations, wearing a green facemask that said "hope" and a T-shirt with the words "We are DC". The mayor gave a short speech, expressing support to peaceful protests and remarked that she wants her own daughter "to grow up in the country where she is not scared to go to the grocery store". Bowser also announced that "today we pushed the army away from our city", while the crowd cheered and applauded.

​Anti-police-brutality protests have been occurring in all 50 of the United States for over a week, as well as in almost every major city, sparked by the killing of George Floyd on 25 May in Minneapolis by police officer Derek Chauvin and three counterparts. All four are currently under arrest.

POTUS Slams Washington DC Mayor Bowser, Says She Is 'In No Way Qualified' to Run the City