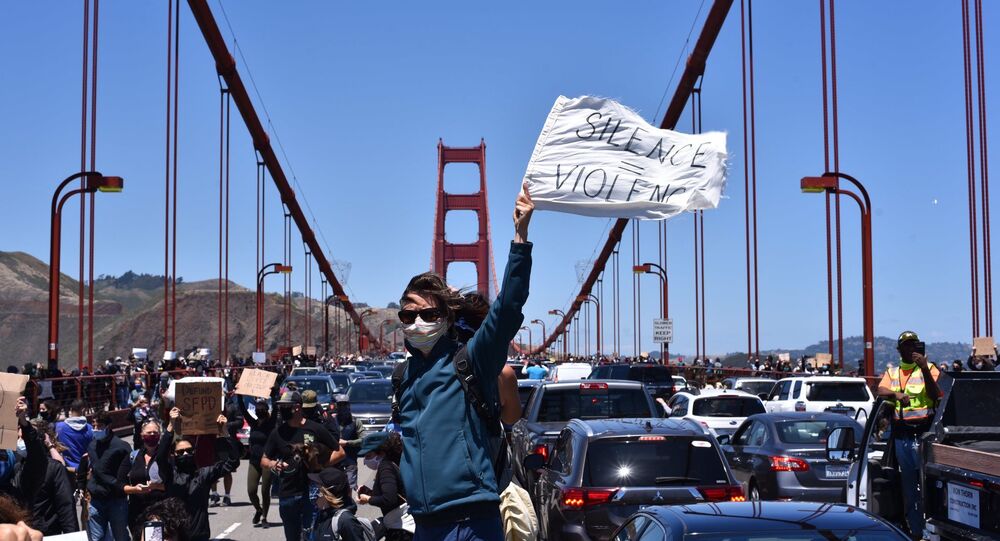 San Francisco is one of many major US cities that has joined the wave of nationwide protests against police brutality sparked by the killing of George Floyd in police custody over a week ago.

Thousands of Black Lives Matter anti-police-brutality protesters marched peacefully across the Golden Gate Bridge in San Francisco, chanting slogans and holding posters. After gathering at noon at the welcome centre for the popular tourist attraction and key transit structure, people moved to fill the walkways by 1:30 p.m. local time.

Videos and photos shared in social media show hundreds of people flocking to the bridge and then blocking the traffic lines, as passing cars can be heard honking. As the march went on, the bridge has been temporarily shut down.

Here's what the Golden Gate Bridge looked like a little while ago. 📸: @abc7newsbayarea pic.twitter.com/D1DZ29vVsi

The police force arrived on the site, but did not use force, according to Twitter users. After the bridge was shut down, police officers negotiated with the protesters to reopen it, local media reported.

Many take a knee in memory of #GeorgeFloyd, #BriannaTaylor, others killed by police. pic.twitter.com/HXiYtEJz78

​The march is part of country-wide protests in all 50 states against police brutality and racial injustice, sparked by the killing of an African-American Minneapolis resident, George Floyd, by white officers and while in custody. Earlier, statewide protests have taken place in the northern California Bay Area in San Francisco, Oakland, San Jose and many other cities and towns.

'2020 Summed Up’: Netizens React to News of Earthquake Hitting California Amid Protests Sweeping US