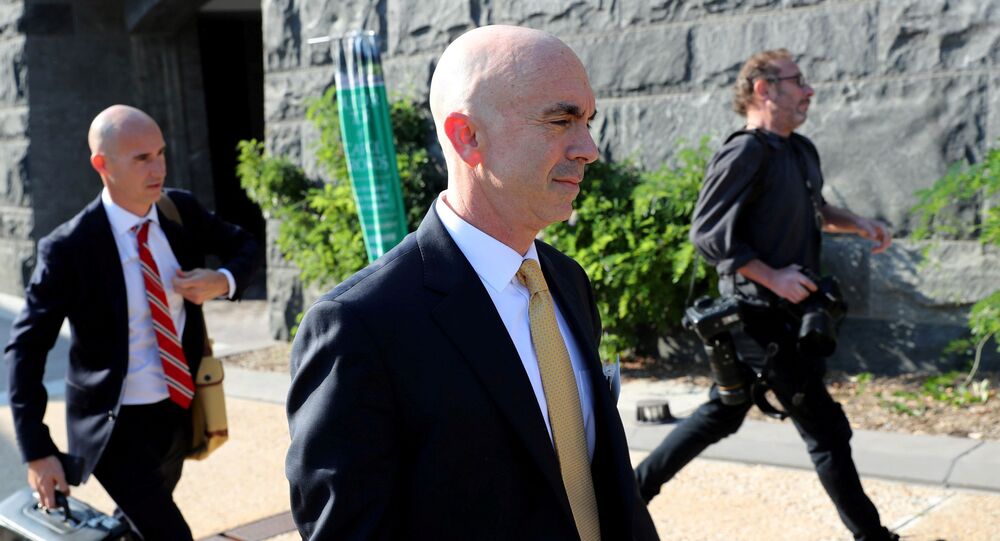 Democrats are investigating the ouster of Steve Linick last month, which they suspect could be motivated by political reasons. Linick now confirms he was looking into Pompeo for potential abuse of office. The secretary of state denies that his decision to fire Linick was payback for the investigations he was conducting.

Steve Linick, the now-former State Department inspector general, has testified that he was investigating the Trump administration’s $8 billion arms sale to Saudi Arabia and allegations of staff misuse by Secretary of State Mike Pompeo when he was dismissed at Pompeo’s recommendation last month.

“Mr. Linick confirmed that at the time he was removed as IG, his office was looking into two matters that directly touched on Secretary Pompeo’s conduct and that senior State Department officials were aware of his investigations,” five Democrats sitting on several Senate and House committees said in a joint statement on Wednesday.

Linick, who took over the office under President Obama in 2013, was fired by Donald Trump on 15 May based on advice from Pompeo. Trump said that he had lost confidence in the inspector general and replaced him with Director of the Office of Foreign Missions Stephen Akard in an acting capacity. Democrats have interviewed Linick behind closed doors as part of an investigation into his firing.

The first probe overseen by Linick regarded allegations that Pompeo had made staffers run personal errands, including walking his dog and picking up his dry cleaning. Linick told Democrats that he had personally discussed that probe with Pompeo’s old friend, Undersecretary of State for Management Brian Bulatao, so that State Department leadership “would not be surprised.”

Pompeo’s reasoning for firing Linick was that he “wasn't performing a function in a way that we had tried to get him to.” The secretary of state denied that the firing was an act of retribution because he allegedly wasn’t aware of that investigation.

He did acknowledge, however, that he was aware of a separate probe by the inspector general into a mid-2019 emergency declaration, which allowed him to sell roughly $8 billion in weapons to Saudi Arabia and other countries, bypassing congressional approval. However, Pompeo maintained, he didn’t know the scope of that second probe. He denied wrongdoing in both cases.

According to the Democrats’ statement, Linick also testified that “Mr. Bulatao and Marik String—who was made acting State Department Legal Adviser on the day of the ‘emergency’ declaration and whose testimony the committees have also sought in this investigation—argued that his office should not pursue the investigation.”

Linick testified that Pompeo had provided written answers in response to questions from his office, but did not respond to a request to be interviewed in person.

Bulatao hinted to the Democrat-controlled House foreign affairs committee that another reason for firing Linick was increased “concern” that his office was leaking to the media the details of the Saudi deal investigation. Linick contradicted that statement, telling lawmakers that an internal review by the Department of Defence Inspector General cleared his office of any unauthorised leaks and that he discussed the matter with Bulatao.

“We still have many unanswered questions, and today’s testimony makes it all the more critical that the Administration immediately comply with outstanding requests for additional witness interviews and documents,” the Democrats said in the statement.

Democrats plan to speak with around half a dozen State Department officials who may have been involved in or had been familiar with discussions leading up to Linick's ouster. The State Department is yet to comment on the new revelations.