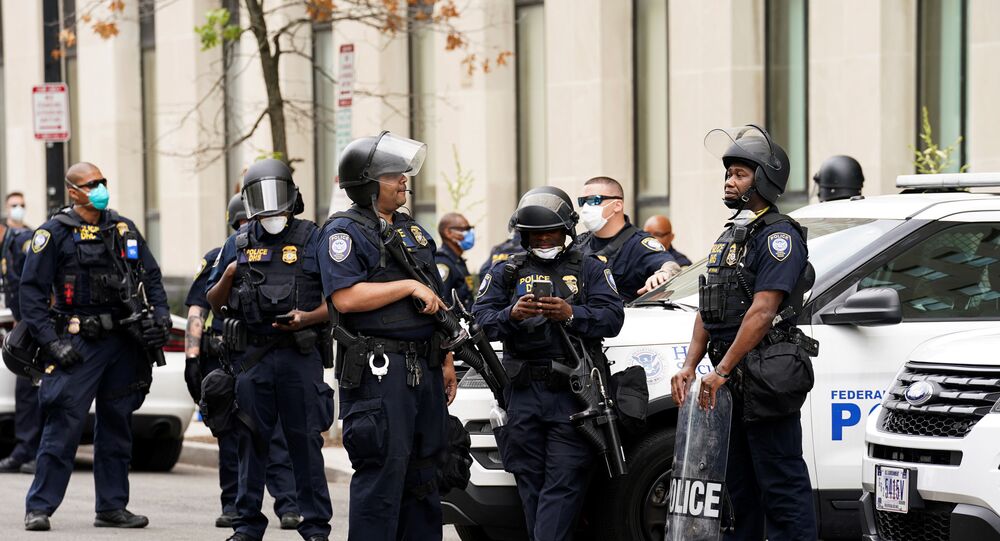 WASHINGTON (Sputnik) - The United States Park Police (USPP) used smoke canisters and pepper balls to disperse protests in Washington, and not tear gas as was reported by media, Acting Chief Gregory Monahan said in a statement.

“As many of the protesters became more combative, continued to throw projectiles, and attempted to grab officers’ weapons, officers then employed the use of smoke canisters and pepper balls. No tear gas was used by USPP officers or other assisting law enforcement partners to close the area at Lafayette Park,” Monahan said on Tuesday.

The chief said that violent protesters began throwing projectiles, including bricks and frozen water bottles. Monahan added that intelligence revealed violent intent against law enforcement and that police officers found a cache of stashed weapons up and down the street.

Media outlets, including Sputnik, however, reported that tear gas and rubber bullets were used. Nicole Roussell, a Sputnik journalist in Washington, DC, said she was fired at by US police several times while covering George Floyd protests, despite saying several times she was a press staffer. As Roussell filmed protesters "being sprayed with mace in their eyes," she was shot at with a rubber bullet on her calf.

"The wound immediately turned purple, raised up, and started bleeding. A policeman with riot gear on shoved me to the ground and ran over me, and I only got up once a protester helped me while urging me to get up quickly," Roussell added.

Roussell also said that police shot off a stinger grenade, which caused "three very painful welts" on her hip and thigh.

Earlier in the day, the International Federation of Journalists (IFJ) demanded that the US authorities stop targeting journalists who cover the George Floyd protests. The Committee to Protect Journalists also said it was looking into the incidents.