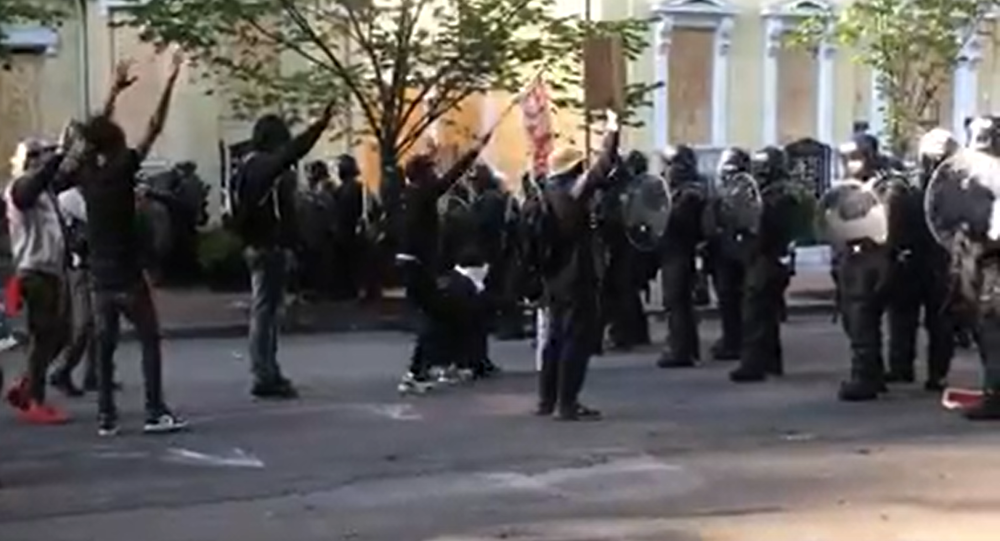 MOSCOW (Sputnik) - Nicole Roussell, a Sputnik journalist in Washington, DC, said she was fired at by US police several times while covering the George Floyd protests, despite saying repeatedly that she was a press staffer.

"I was at the White House tonight covering the ongoing protests when several types of police started shooting at the protesters. I ran closer to get footage of what was happening and the police quickly began shooting what I think were a combination of stinger grenades and rubber bullets. They were also shooting off tear gas at us so we were all coughing during this", Roussell said.

According to Roussell, when she said she was a journalist, the police shot off a stinger grenade, which caused "three very painful welts" on her hip and thigh.

A video from Washington, DC that was filmed by the Sputnik journalist shows the protesters shouting at officers, while the police are trying to push people back from the street. Roussell clearly informed the police that she is with the press several times before the sound of a rubber bullet is heard and she screams – meaning that the officers targeted her despite knowing she was a journalist, not a protester.

"I got one a moment later on my torso, which is also a raised welt", the journalist added.

Apart from this, when Roussell filmed protesters "being sprayed with mace in their eyes", she was shot at with a rubber bullet on her calf.

"The wound immediately turned purple, raised up, and started bleeding. A policeman with riot gear on shoved me to the ground and ran over me, and I only got up once a protester helped me while urging me to get up quickly", Roussell added.

The Sputnik journalist stressed that she had not only told the police she was a press staffer, but also had a press badge on.

"Several times before I was shot I verbally said I was press. I also had my press badge on around my neck. Other press were subjected to similar treatment, as were the protesters", Roussell concluded.

Over the past week, numerous journalists from Fox News, RIA Novosti, DW, CBS, Vice, and others have received injuries amid the violent protests in various American cities.

The unrest was caused by the death of George Floyd, an African-American man who died soon after his arrest in Minneapolis. A video depicting the incident showed Derek Chauvin, a white Minneapolis police officer, pinning Floyd to the ground with his knee on his neck for over eight minutes last Monday. The man repeatedly said he can't breathe before passing out and later died in a local hospital.

Following Floyd's death, Chauvin was charged with third-degree murder and second-degree manslaughter, while a total of four police officers have since been fired.