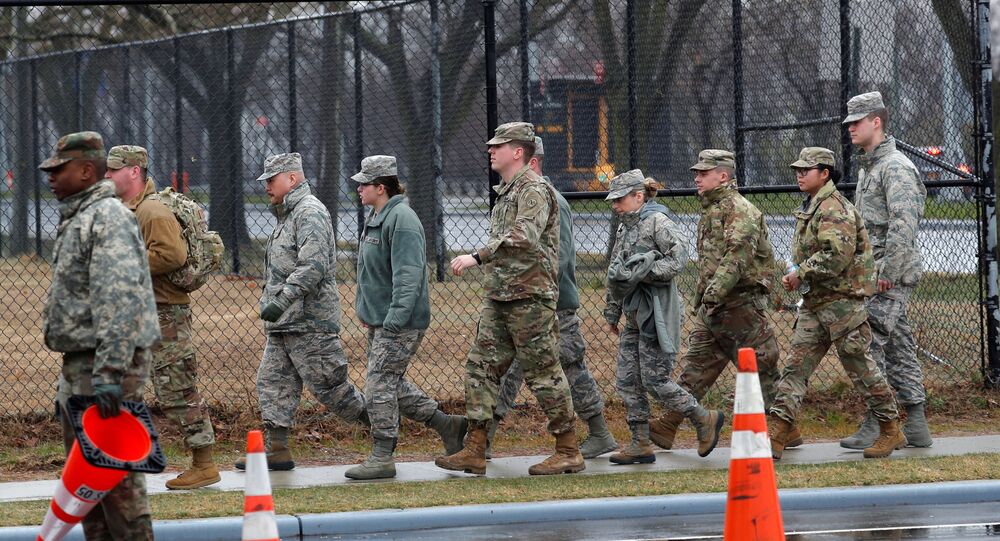 US Media: Military to Run Country if White House, Congress Are Incapacitated by COVID-19

So far, top US politicians and congresspeople have managed to avoid contracting the coronavirus with President Trump and Vice President recently announcing that they had tested negative for the infection.

The US military has started preparations for implementing a set of secret contingency plans that can be set in motion if the ongoing COVID-19 outbreak starts endangering the integrity of the American government and the ability of local authorities to uphold order, Newsweek reported citing documents obtained and accounts of anonymous military sources. According to the media, in the worst-case scenario, the US military might actually start running the country in violation of the legal line of "devolution".

Sputnik could not independently verify Newsweek's report and the authenticity of the documents it cites.

What do These Alleged Plans Involve?

Newsweek claims that several contingency plans have been devised by the military to prepare for a number of emergency situations - from a destructive hurricane to a 9/11-like or worse terrorist attack. According to the media, Defence Secretary Mark Esper ordered US Northern Command (NORTHCOM) to start preparations on seven of them back on 1 February so that troops would be ready to deploy if these plans need to be activated.

Three of these plans are responsible for evacuating as many top politicians and officials as possible from Washington to secure locations, Newsweek claims. President Donald Trump, Vice President Mike Pence and their families would reportedly be first. The second plan allegedly suggests the evacuation of the Secretary of Defence and other national security officials. The third plan, dubbed Atlas, was devised to move Congress chiefs, the Supreme Court and other "important figures" to pre-designated safe sites, namely - secret bunkers allegedly situated in Maryland, the media outlet claims.

Three more plans, codenamed Octagon, Freejack, and Zodiac, reportedly involve the military organising a way to keep government running in Washington DC, North Carolina, and Maryland. These plans also would allow to them change the ordinary line of "devolution" so that pre-designated officials could take over the functions of top government members, who can no longer fulfil them, thus circumventing constitutionally set rules for government succession, Newsweek claimed.

One option for executing this plans is, reportedly for military commanders to take control of US institutions on a temporary basis.

The last plan, according to Newsweek, codenamed Granite Shadow, is essentially a playbook for the US military to run domestic missions, something that they are usually not allowed to, in case of an extraordinary emergency. According to the report, the plan involves the use of drastic measures such as weapons of mass destruction and a secretive "national mission force".

The "national mission force", not mentioned on public documents, allegedly always remains on high alert and posseses "special authorities" pre-delegated by the president and the attorney general, the media claims, citing an anonymous retired military officer. Newsweek claims that such a force is supposed to be used if, say, a nuclear device detonates in an American city, but in fact, can be activated under other circumstances - namely, if coronavirus-induced panic and food shortages lead to uncontrollable violence on US streets and local authorities are unable to cope with it.

In their effort to end violence and organise order, the US military reportedly will have an array of methods at their disposal, including the introduction of martial law.

At the same time, commanders are authorised to act on their own in such situations if they are unable to reach superiors or if "prior authorisation by the president is impossible", the media outlet added.

Newsweek stressed that while the military would receive extraordinary authority under these contingency plans, they are still obliged to restore proper civilian rule "as soon as possible".

'Uncharted Territory' for US Military

These contingency plans, however, may prove ineffective in the current coronavirus crisis, Newsweek said, citing a military officer involved in the emergency planning. According to the media's source, these measures were devised to react to a major local disaster or attack and essentially are limited to temporary measures to hold on until the proverbial "cavalry" arrives from unaffected US regions or, as in the case of DC being evacuated, to transport top officials to a safe location.

As the media outlet notes, there might be no place in the US safe from the coronavirus, if (or when) these plans are activated.

"In scenarios where one city or one region is devastated, that's a pretty straightforward process. But with coronavirus, where the effect is nationwide, we're in territory we've never been in before", Newsweek's military source shared.

According to the media outlet, the Pentagon realises this weakness and has ordered to ban all non-essential (not related to the preparations for the contingency plans) off-base travel and is trying to isolate personnel on military bases to keep them healthy for the moment they might be needed.

Number of Coronavirus Cases Hits 300,000 Worldwide, US Has Third Most - Report