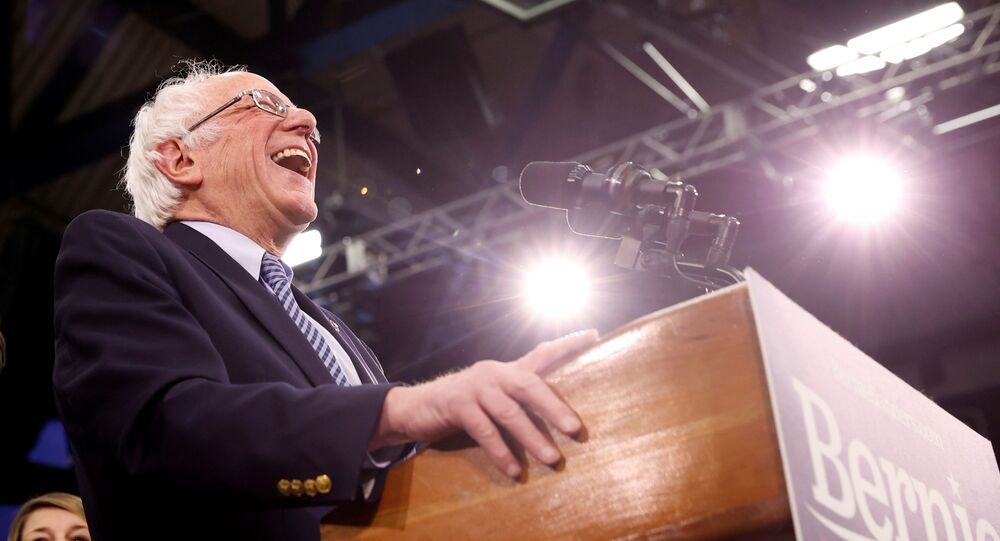 US Senator Bernie Sanders, 78, has shown solid finishes in the two opening contests of the 2020 US presidential race, in Iowa and New Hampshire. Some US officials and representatives placed in the financial sector of the nation are reportedly alarmed over what is described as Sanders' socialist rhetoric, a possible barrier for his presidency.

The Sanders campaign has opposed donations from the wealthy and from multinational corporations, while the veteran politician - who has taken the lead among Democratic candidates after the New Hampshire primary - has consistently rallied against powerful corporations in favor of the American citizenry.

The longstanding Sanders policy platform appears to have arrived at its first crucial challenge amid the ongoing battle for the Oval Office. According to AP, citing sources, the Sanders campaign is in talks with the Democratic National Committee (DNC) to headline the first of two high-profile party fundraisers, in which the self-proclaimed Democratic socialist Senator will have an opportunity to win over the US establishment, to enable a solid flow of big donations for the purportedly cash-strapped DNC.

Sanders is reported to be in a tricky situation because he would, according to reports, have to teeter between campaign promises and DNC fundraising expectations. Sanders remains the only Democratic candidate who has not done an event of this kind for the party. His recent remarks in New Hampshire did not provide a clue that his policy stance would alter.

"This is a movement from coast to coast which is demanding that we finally have an economy and a government that works for all of us - not wealthy campaign contributors'', Sanders told supporters in New Hampshire.

The situation could become intriguing as Sanders is on record by making consistent anti-DNC assertions, accusing colleagues of rigging the 2016 primaries to favor then-rival candidate Hillary Clinton. Sanders' current presidential campaign, unlike every other current US presidential candidate, refuses to accept donations from wealthy entities - whether individuals, corporations or lobbyists - in favor of accepting small donations from individual voters.

If Sanders headlines a DNC fundraising event, he may have to accept the support of American business elites as a means of attracting the kind of cash required to win a US presidential election, an act that he has consistently refuted.

© AP Photo / Mark Lennihan
Former Goldman Sachs CEO Slams Bernie Sanders, Warns of Economic Consequences for US
Under US finance rules at this particular stage of the campaign, a single donor attending a DNC event can cut a check up to $300,000.

New Hampshire was the second event in the presidential contest, coming on the heels of last week's caucuses in Iowa, in which software failed to identify a Democratic winner for several days.