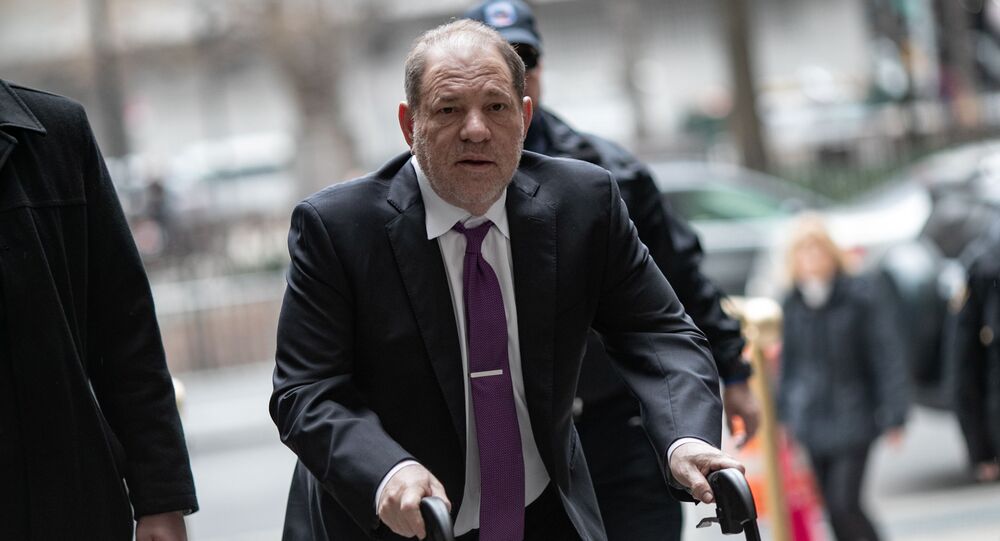 Gag Order: Jury Laughs at Naked Photos of Harvey Weinstein, Who Joked They Were From Playboy

The case against Harvey Weinstein, a multi-millionaire Hollywood mogul who has been accused by numerous women of sexual assault and manipulating them into sex, continues as he faces court for the alleged rape of actress Jessica Mann.

Prosecutors on Tuesday showed naked photographs of Harvey Weinstein to jurors during his rape trial in New York despite a protest from his lawyers, the Sun reported.

Yakov Mantelman, the photographer for the Manhattan District Attorney's office testified that he took the pictures in June 2018, confirming that they fairly and accurately portray Weinstein.

Following the confirmation, the judge ordered that the photos be admitted as evidence shown to the jury, despite an objection from Weinstein's defence team.

The photos were passed around the jury amid the laughing and wincing of female members, but will not be kept on public record.

Despite the photographs being shown to the jurors, they were not shown to the public. Two sketch artists, however, managed to graph several of images of the photo's being observed by the jury.

After Weinstein left the court, a journalist asked him to confirm that the nude photos were of him.

In response, the 67-year old turned to his lawyer and said “no, it was Playboy”.

The evidence was shown during a case regarding Jessica Mann, a woman Weinstein is accused of raping in March 2013, who testified that the disgraced billionaire's genitals looked "deformed" or "intersex".

Mann acknowledged that she had agreed to an "extremely degrading" relationship with Weinstein, during which the Hollywood mogul raped her, she alleges.

Over a three day period, she was questioned regarding the relationship by Weinstein's lawyer, Donna Rotunno.

"I know the history of my relationship with him," Mann said on Tuesday.

"I know it was complicated and difficult."

“That doesn't change the fact that he raped me."

Her testimony on Monday was cut short when she began weeping after being asked to read an email where she describes her alleged assailant as a "pseudo father".

One email dated to 2013 shows Mann telling Weinstein that she had a recent breakup and wanted to have dinner with him.

In a 2014 email, Mann asked Weinstein for a referral for a membership at the Soho House, an exclusive club.

"I love you, always do. But I hate feeling like a booty call," she said in one email to Weinstein.

Weinstein has pleaded not guilty to charges launched against him that he sexually assaulted Mann as well as another woman, Mimi Haleyi, and others, and faces life in prison if he is convicted of predatory sexual assault.

Since 2017, over 80 women have issued accusations of sexual misconduct against Weinstein, kicking off the #MeToo movement, which has seen women come forward with accusations against men who had sexually assaulted them.

Weinstein, however, claims that the encounters were consensual and that Mann and other women he was physically involved with did so to further their careers in Hollywood.