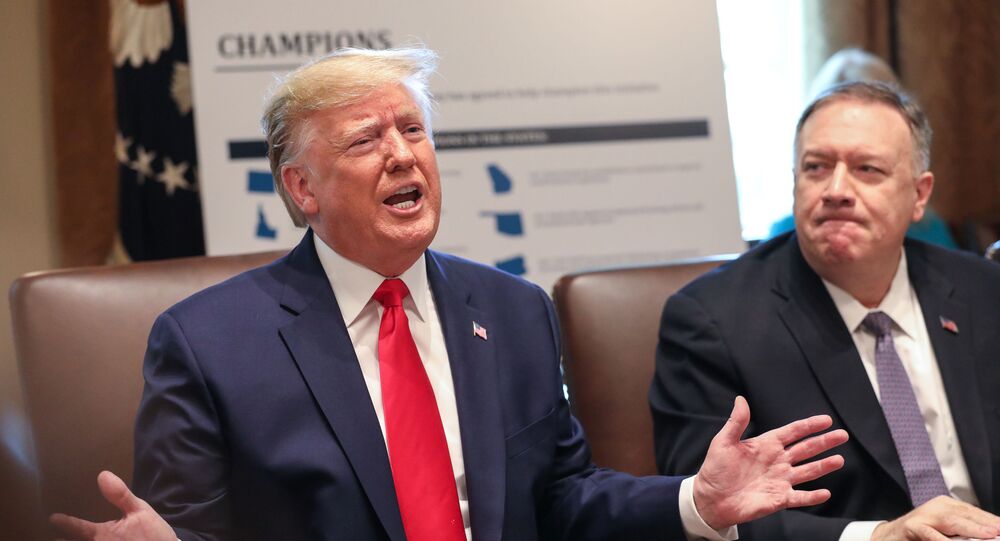 If crowded political rallies reminded you of preachers, addressing their flocks, the footage of the recent White House meeting could hardly come as a surprise; with the secretary of Housing and Urban Development Ben Carson starting it off with a prayer to thank the Almighty for one particular participant of the gathering.

Secretary of Housing and Urban Development Ben Carson opened the White House Cabinet meeting with a prayer thanking God for "the blessings that you have bestowed upon this country," meaning no one else but his boss, US President Donald Trump.

The video that went viral, shows the neurosurgeon-turned White House official, addressing the Almighty, saying "We thank You for President Trump, who also exhibits great courage in the face of constant criticism," while Trump and his other staffers, including US Secretary of State Mike Pompeo, sat with their eyes closed and hands joined together.

"We ask you to give him the strength to endure, and the wisdom to lead and to recognise you as the sovereign of the universe, with the solution to everything. Give us all an understanding heart and compassion, those are the things that will Keep America Great," Carson, who also mentioned the vice-president, advisers and staffers, said during the 2-minute-prayer.

In the end, Trump thanked Carson for the prayer and got straight to praising the American economy that is "doing great", according to him.

"We thank You for President Trump who also exhibits great courage in face of constant criticism. We ask You give him strength to endure & wisdom to lead and to recognize You as the sovereign of the universe, with solution to everything" pic.twitter.com/B6GNWA7IUD

​Carson is not the only White House official who has been vocal about his belief in God. Earlier this month, US Secretary of State, Mike Pompeo, spoke out about his faith in and relationship with Christianity in an address elaborating on what it means to be a Christian leader, at the American Association of Christian Counselors in Nashville, Tennessee. The speech raised doubts, as the ex-leader of the National Jewish Democratic Council Aaron Keyak commented to The Times of Israel, questioning whether an official could use his post to promote one particular religion.

'Very Smart' and 'Much More Popular': Donald Trump Toots His Own Horn on Twitter