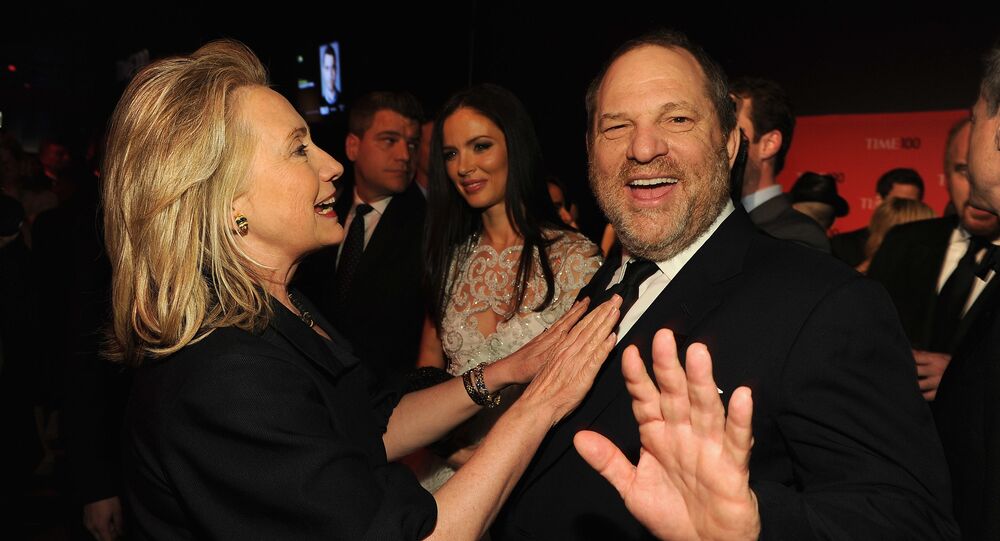 A representative for the film mogul, who has been charged with numerous sex offences, has dismissed the report, while admitting that Harvey Weinstein did indeed support Hillary Clinton's 2016 presidential campaign, including financially.

The office of Clinton’s 2016 presidential campaign accepted help from accused sex offender Harvey Weinstein, who tried to assist the Democratic frontrunner in getting rid of her main competition in the primaries, Vermont Senator Bernie Sanders, US journalist Ronan Farrow claims in his new book "Catch and Kill: Lies, Spies, and a Conspiracy to Protect Predators".

Farrow cites a reported email exchange between Weinstein and an unnamed campaign official, in which the film producer supposedly argued that Sanders' attempt to reach out to Latino and African-American voters must be stopped. He allegedly sent the official an article criticising Sanders as a candidate, apparently thinking it would help Clinton's campaign undermine the Vermont senator’s outreach. The campaign official is said to have thanked Weinstein for the "idea" and promised to "forward some creative".

Weinstein's representative reacted to the report in response to a request from Fox News, calling the episode described in the book a "dramatic fictional tale" made from an "amalgamation of unrelated pieces of information".

"His information is flawed, his 'facts' are inaccurate and his intention was to sell a novel, not break real news", Weinstein's spokesperson said.

The film producer's representative, however, confirmed that Weinstein was a "staunch supporter" of Clinton's presidential bid and did help raise money for her 2016 campaign.

Clinton recently faced criticism from actress Rose McGowan, who became a poster girl for the MeToo movement that was sparked by revelations of Weinstein's alleged sexual offences. McGowan slammed Clinton after the politician’s publicist reportedly contacted Farrow to express concern about his new book. Farrow, who is behind bringing the film mogul's alleged crimes to light, suggested that Weinstein had tried to pressure him by using his ties with Clinton.

"I can’t believe I used to support her. I guess predators are her style. Hillary Clinton, did you have any concern for your husband’s victims? And what about [Harvey Weinstein's] victims? No? Didn’t think so", McGowan stated in a series of tweets.

Following the revelations about his alleged numerous sexual misconducts, Weinstein faced multiple accusations and was charged with "rape, criminal sex act, sex abuse and sexual misconduct" involving two women in May 2018. He was arrested, but later released on bail. One of the charges was dropped by a judge later and the remaining ones will be reviewed at a trial, which is scheduled to take place on 6 January 2020.