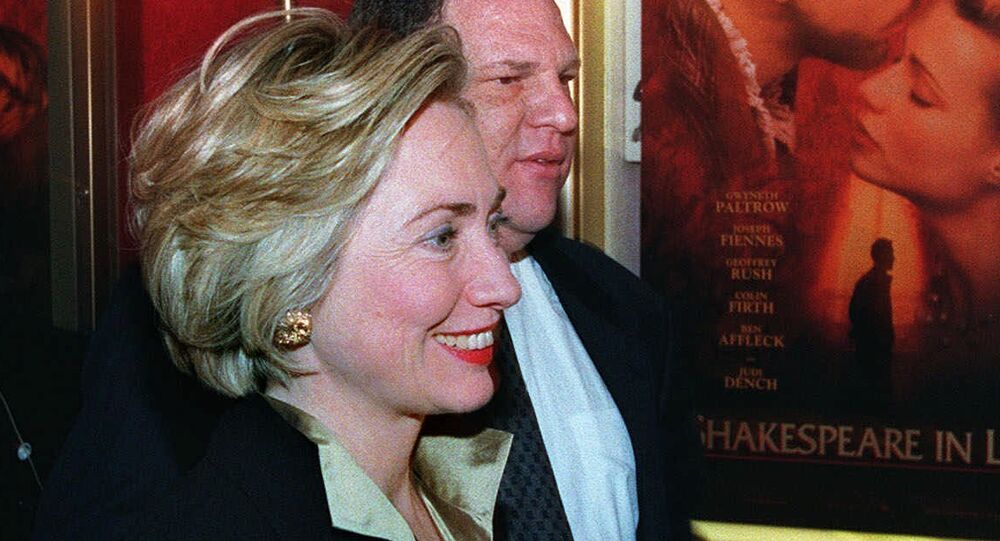 The Harvey Weinstein sexual assault scandal has taken a decidedly political turn, with former presidential candidate Hillary Clinton catching major flack on social media for her belated and weak attempt to distance herself from the disgraced Hollywood producer.

Speaking to CNN on Wednesday, Clinton said that she would donate campaign contributions Weinstein had given her over the years to charities. She also condemned his behavior in broad terms, saying she was "sick" and "shocked" about the multiple sexual assault allegations surrounding the producer.

"I was appalled. It was something that was just intolerable in every way," Clinton said. "And you know, like so many people who've come forward and spoken out, this was a different side of a person who I and many others had known in the past," she added, deliberately using the past tense.

© REUTERS / Andrew Kelly/File
Oscars Academy Meets to Discuss Disgraced Award Winner Harvey Weinstein's Future
Clinton stressed that she "certainly didn't" know of Weinstein's alleged predatory behavior. "But I can only speak for myself, and I think speak for many others who knew him primarily through politics."

Clinton's comment for CNN echoed a formal statement she had released October 10, in which she stated that she was "shocked and appalled" by the revelations made by the women who came forward.

Weinstein personally contributed an estimated $26,000 to Clinton's campaigns starting with her 2000 Senate race, nearly $1 million more for the Democratic Party, and another $1.5 million through bundle donations from friends and associates. He is also known as a close friend of the Clintons. In 2015, they rented a home next to Weinstein in the Hamptons. Mrs. Clinton also personally headed up several campaign fundraising events hosted by the producer.

As a result, not everyone is buying Clinton's response to the Weinstein scandal. She received criticism from her own Party this week for remaining silent on the issue for over five days, notwithstanding repeated media appearances during her ongoing book tour.

White House advisor Kellyanne Conway jumped on Clinton's weak response on Twitter, recalling that her rush to condemn the National Rifle Association for the Las Vegas massacre was much quicker.

It took Hillary abt 5 minutes to blame NRA for madman's rampage, but 5 days to sorta-kinda blame Harvey Weinstein 4 his sexually assaults.

And I have to say, Hillary's interview with Fareed Zakaria was shameful in its deflection and its disingenuousness.

Others don't seem convinced about Clinton's commitment to donate the donation money to charity.

Hillary says she has no place to send the Weinstein campaign donation money back to, and then she remembered the Clinton Foundation.

Hillary will give Weinstein’s donations to charity.

So basically Chelsea Clinton will end up with Weinstein’s money. SAD!#Haiti pic.twitter.com/c7rkycI05i

​Users also recalled the numerous instances of sexual misconduct surrounding Bill, some asking why Weinstein is being investigated while the former president isn't.

The FBI has been ordered to investigate Harvey Weinstein. How the hell is Weinstein under investigation by the FBI but not Hillary Clinton??

​Finally, some critics focused on Mrs. Clinton's campaign rhetoric about being a hero for women.

She knew about Bill Clinton's crimes

She knew about Anthony Weiner's crimes

She knew about Harvey Weinstein's crimes

​Last week, a New York Times investigation saw several women who had worked for the Weinstein Company coming forward to accuse the Hollywood mogul of sexual harassment. The story led to more women coming forward, including Hollywood stars Angelina Jolie and Gwyneth Paltrow. Weinstein has been fired from the board of the Weinstein Company. His wife has left him and he has faced strong condemnation from other Hollywood stars. On Wednesday, the British Academy of Film and Television Arts suspended the producer's membership in light of what it said were "very serious allegations."