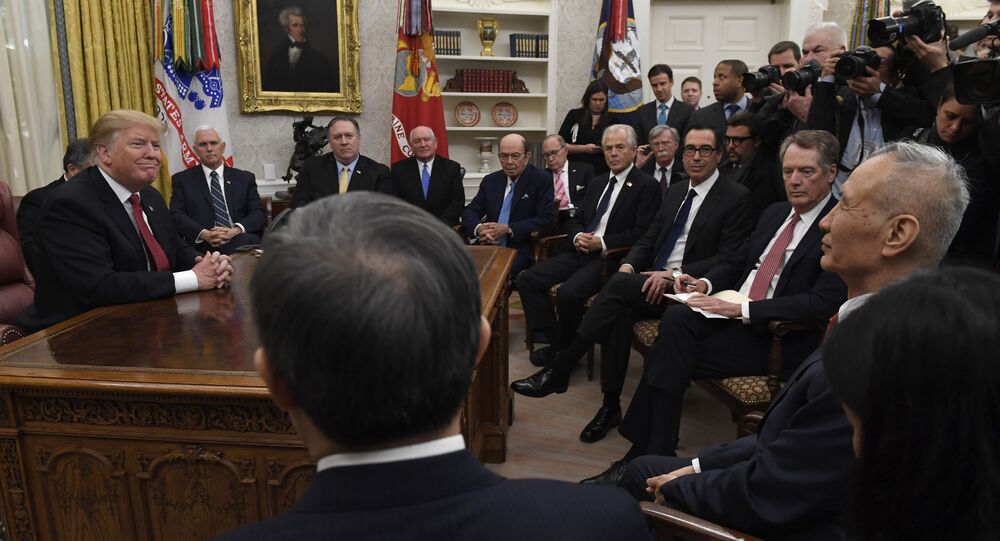 The US president announced plans to impose 10% tariffs on Chinese goods worth $300 billion starting 1 September, citing a lack of progress in trade talks, and promised to continue "taxing" the country until a trade agreement is finally reached.

Not everyone in the White House was on the same page as US President Trump when he decided to impose additional tariffs on China on 1 August, sending American stocks plummeting, The Wall Street Journal reported, citing an anonymous source.

According to the media outlet, the decision was opposed by Trade Representative Robert Lighthizer (although his spokesman said that he "supports the president’s action"), Treasury Secretary Steven Mnuchin, and two of Trump's advisers - Lawrence Kudlow and John Bolton. Despite the opposition, Trump insisted on the tariffs, with the move gaining the support of White House adviser Peter Navarro, according to the WSJ.

...buy agricultural product from the U.S. in large quantities, but did not do so. Additionally, my friend President Xi said that he would stop the sale of Fentanyl to the United States – this never happened, and many Americans continue to die! Trade talks are continuing, and...

Announcing the new tariffs, Trump explained that they were introduced due to China seeking to renegotiate trade agreements that had already been reached right before they were to be signed, namely regarding the purchase of American agricultural products and the sale of fentanyl to the US. Trump also promised to continue "taxing" China until a trade deal is reached. The new 10% tariffs on 300 billion dollars' worth of Chinese goods will enter into force on 1 September.

China slammed the decision as a non-constructive "way to resolve economic and trade frictions" and vowed to retaliate if the US proceeds with new taxes. In the past, Beijing has responded to Washington's tariffs reciprocally by imposing its own import duties on American goods.

The trade war between the two countries started in 2018, when Washington imposed hefty tariffs on Chinese steel and aluminium. Trump accused the Asian country of abusing preferences in trade with the US and demanded that a new trade agreement be signed, promising to lift the tariffs once this is done.