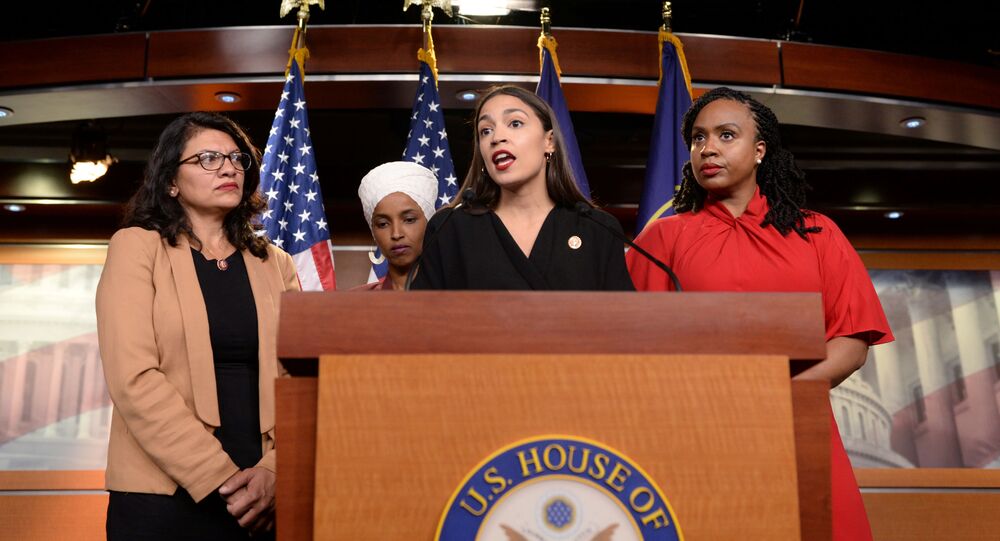 The four lawmakers “never have anything good to say” about the country they serve, Trump said during a Wednesday rally, prompting chants of “send her back” toward Minnesota lawmaker Ilhan Omar.

US President Donald Trump used a Wednesday rally in North Carolina to double down on his criticism of four Democrat lawmakers commonly known as “The Squad,” claiming that they view the country in which they serve as “the force of evil.”

“The leading voices of the Democrat Party are left-wing extremists who reject everything our nation stands for. These left-wing ideologues see our nation as a force of evil,” Trump said at the rally.

“They never have anything good to say. That’s why I say, ‘Hey if they don’t like it, let them leave. Let them leave,’” Trump said. “They’re always telling us how to run it how to do this — you know what, if they don’t love it, tell them to leave it.”

The US president addressed each member of The Squad by name, recalling the quotes by the lawmakers that reinforce his assertions.

As he called out Representative Ilhan Omar on her failure to condemn Al-Qaeda, her eyebrow-raising 9/11 remarks and her Israel allegations, the crowd broke into chants of “send her back,” not unlike the anti-Clinton “lock her up” chants Trump encouraged during the 2016 presidential campaign.

Together, we will continue unleashing the power of American enterprise, so every American can know the dignity of work and the pride of a paycheck. With your help, we will elect a Republican Congress to create a safe, modern, fair, and LAWFUL system of immigration! #MAGA2020 pic.twitter.com/zxy6zRLGu1

The president lashed out at Rep. Alexandria Ocasio-Cortez, refusing to call her by her full name.

“We’ll call her Cortez. Too much time,” he joked.

On Sunday, Trump tweeted that the four lawmakers were from foreign nations whose governments are a “complete and total catastrophe” and suggested that they “go back” to those same foreign nations to improve governance. The tweets sparked massive outrage from the Democrats and several Republicans, who condemned the posts as “racist.” In the following four days Trump has reiterated his comments and denied the racist subtext.

Before going to North Carolina, Trump insinuated that there are rumors that Representative Omar – the only one of the four actually born outside the US – married her own brother to allow him to get US citizenship, The Daily Mail reported.

When asked by a reporter whether his administration would probe the suggestions, Trump acknowledged that he was aware of the rumors, but claimed that he “knows nothing about it,” adding that “somebody would be looking at that.”

The rumor dates to Omar's campaign for the Minnesota legislature, the Mail report says. At the time, she refuted the allegations and slammed those that spread the rumor, saying that it was circulated by those who did not want to see a black female Muslim in Congress.