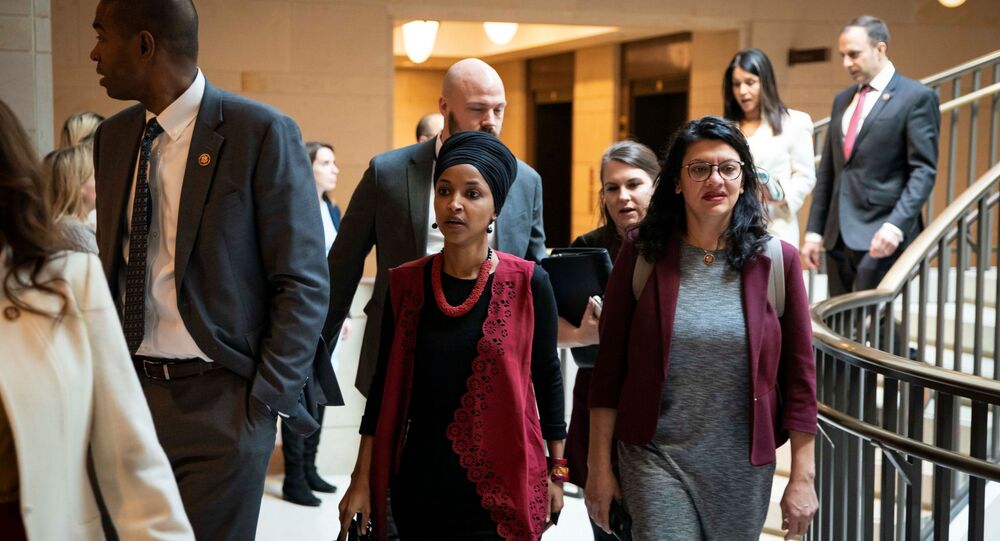 Donald Trump's recent suggestion that people who are not content with how the US is run "leave" the country has resulted in a major political storm on Capitol Hill, with four Democratic congresswomen of colour calling for Trump to be impeached and other, more moderate Democrats simply branding his comments racist.

Democratic Congresswoman Ilhan Omar, supported by three other so-called “progressive” lawmakers, Alexandria Ocasio-Cortez, Ayanna Pressley, and Rashida Tlaib, has accused President Donald Trump of promoting the "agenda of white nationalists" and stated that it was "time to impeach" him over his actions and statements.

Omar also lashed out at Trump's immigration policy that allegedly led to the separation of migrant children from their parents, calling his administration "the most corrupt" in US history, without elaborating further.

"If You Are Not Happy Here, You Can Leave"

The four Democratic congresswomen have been criticising Trump's politics since their election last year, but their stand-off with the US president reached a new level after he allegedly criticised the progressive “squad” in a speech and in tweets. Trump suggested on his Twitter page, without naming any names, that instead of telling "the people of the US […] how [the] government is to be run", people who are not "happy" in the US should return to "the totally broken and crime infested places from which they came".

....it is done. These places need your help badly, you can’t leave fast enough. I’m sure that Nancy Pelosi would be very happy to quickly work out free travel arrangements!

Notes of Trump's speech, photographed on the same day, also revealed accusations against the squad of saying "anti-Semitic and anti-American things all the time", as well as of hating the US and trying to make it "socialist". The notes also featured a suggestion allegedly addressing them - "if you not happy here you can leave".

Not only these four congresswomen, but many "moderate" Democrats as well, slammed Trump's statements as "blatantly racist". Democratic House Speaker Nancy Pelosi claimed that the president "went beyond his own low standards" and stated that the House would contest his alleged "make America white again" agenda.

She also praised a resolution, introduced by House Democrat Tom Malinowski, that urges for officially condemning Trump's "racist comments", which had allegedly "increased fear and hatred of new Americans and people of colour". The resolution is expected to be put to a vote later on 16 July.

Not a "Racist Bone in My Body"

Trump was quick to contest the claims, arguing that his statements were not racist, as he doesn't "have a Racist bone in [his] body", and called the upcoming vote on the resolution a "Democrat con game". He suggested that instead, the House should condemn "the filthy language, statements and lies" allegedly regularly voiced by the progressive Democratic congresswomen.

.....shouting of the F...word, among many other terrible things, and the petrified Dems run for the hills. Why isn’t the House voting to rebuke the filthy and hate laced things they have said? Because they are the Radical Left, and the Democrats are afraid to take them on. Sad!

At the same time, the US president said that most Democrats are simply "afraid" of voting against the squad, whom he called "the Radical Left". He also claimed that Pelosi had tried to "push away" the problematic quartet, but failed and is now stuck with them "forever" and will thus face the consequences in the 2020 elections.

Lack of Unity Among Democrats

Although Pelosi has supported the congresswomen whom Trump was allegedly referring to, she hasn’t commented on their impeachment suggestions. This is not the first time that Democrats have raised the possibility of impeaching the incumbent president, as such calls have been raised since the beginning of his term in office.

However, the House speaker admitted that the Democrats wouldn't be successful if they tried to impeach Trump in 2019, suggesting that congressional committees should instead start probing the president on all fronts, trying to find any misconduct or crime that he may have committed. Notably, this proposal came after the biggest such probe, Special Counsel Robert Mueller's investigation, failed to find any such misconduct.

Furthermore, infighting within the Democratic Party itself is threatening to prevent them from attacking Trump as a united front. Namely, the chief of staff of Alexandria Ocasio-Cortez, one of the four progressive congresswomen, has recently lashed out at Nancy Pelosi, calling her an ineffective legislator and criticising her vote in favour of the border aid bill, claiming that by doing so, she was enabling "a racist system".

Pelosi Clashes With Trump Online Over 'Attacks' on 'Democratic Congresswomen'

If People Not Happy in America, They Can Leave - Trump After Posting Tweets Targeting Congresswomen

'Do Not Take the Bait': US Congresswomen Fire Back at Trump's Tweets

Trump ‘You Can Leave’ Monday Speech Notes Caught on Camera