Voting is under way in the US midterm congressional elections, with the polls being seen by many as a test of President Donald Trump's popularity. Sputnik looks at some of the key contests which are taking place across the US.

Voters on the east coast of the US began casting ballots first on Tuesday, November 6, but the final results of the elections across the country will not be known until Wednesday, November 7.

One-third of the 100 seats in the Senate are up for grabs as well as 435 seats in the House of Representatives in Washington DC. Voters are also voting for governors and other positions in many states.

The Democrats are hoping to capture the House of Representatives, which could stymie President Trump's attempts to push through new legislation or repeal laws passed during the Obama administration. 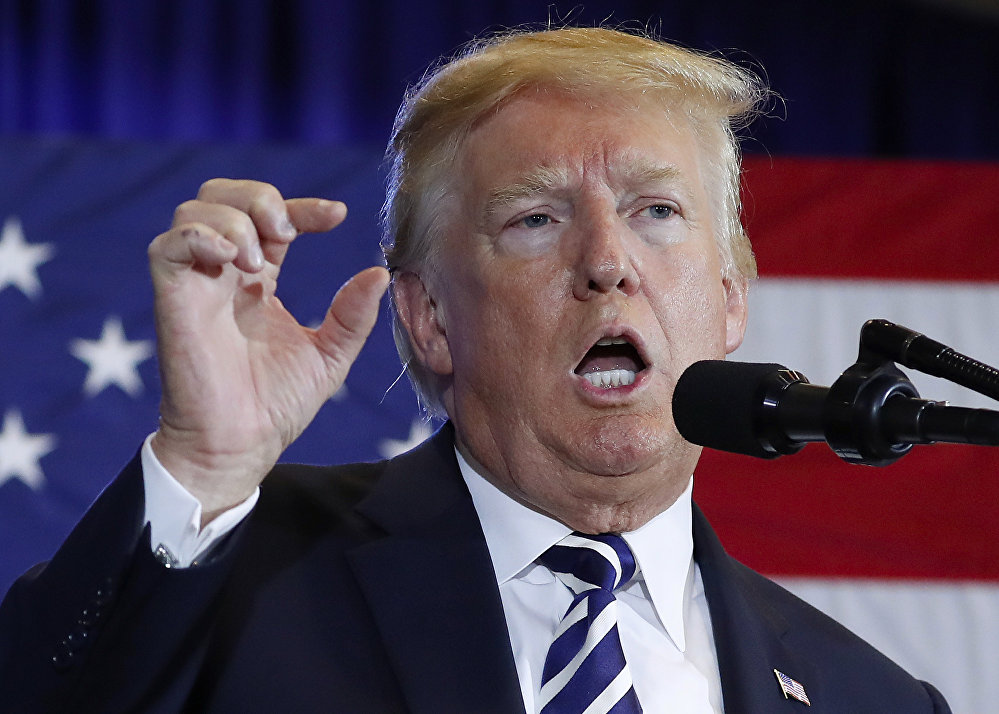 © AP Photo / Pablo Martinez Monsivais
In this Aug. 31, 2018 photo, President Donald Trump gestures while speaking at the Harris Conference Center in Charlotte, N.C. President Donald Trump is escalating his attacks on Attorney General Jeff Sessions, suggesting the embattled official should have intervened in investigations of two GOP congressmen to help Republicans in the midterms. Trump tweeted Monday that “investigations of two very popular Republican Congressmen were brought to a well publicized charge, just ahead of the Mid-Terms, by the Jeff Sessions Justice Department.”

East coast states will obviously deliver their results first and one of the most fascinating will be the race for West Virginia's 3rd district.

Trump won the 3rd district by 30 points in 2016 and even the Democratic candidate Richard Ojeda admits he voted for him.

"He's the first president that came down here and spoke of West Virginia in a positive light. The sun doesn't always shine in West Virginia, but the people do," said Ojeda.

Today will have the highest youth turnout in midterms history.

Vote for our lives.

Ojeda opposes universal background checks for gun buyers, and is pro-coal, which are both major issues in a conservative, mining stronghold.

Carol Miller has been put up by the Republicans after the incumbent, Evan Jenkins, vacated to run for the Senate.

On her website Miller, standing in front of a barn, promises to "cut the bull out of politics" and also points out she is "the only candidate endorsed by President Trump".

It will be a tight race, with four polls putting Miller ahead and two saying Ojeda is winning.

If the midterms are to become a political earthquake for the White House then look for the first tremor in Texas.

Incumbent Senator Ted Cruz lost out to Trump in the race for the Republican nomination in 2016 but remains a big name for the GOP.

El Paso, I love you more than I can say. I am so grateful. I am so proud of what you're making happen right now. Let's win this election. pic.twitter.com/d7JXrY7rRD

If he were to be beaten by Beto O'Rourke, 46, it would represent a huge shock and could suggest Trump's chances of winning re-election in 2020 are on a knife edge.

O'Rourke, a three-term congressman and former guitarist in a punk band, is drawing support from better educated city dwellers while Cruz tends to rely on voters in the Texas countryside.

O'Rourke raised a record-breaking $38 million to help pay for campaign ads but he is still trailing Cruz in the polls.

Trump flew into Houston on Monday, November 5, in an attempt to shore up his erstwhile opponent, Cruz.

Jon Tester, the incumbent Democrat Senator in Montana, won last time round by 20 percentage points but he has drawn the ire of the Trump administration due to his fierce opposition to Ronny Jackson, who the President tried and failed to get nominated as Veterans Affairs Secretary.

Jackson pulled out but denied allegations of careless drug prescription and drunken behavior, including "wrecking a government vehicle".

I just cannot believe a democrat even has a chance in Montana. This is Big Sky Country! ‘Democrat’ should not even be in the vocabulary!
Trump won there by 20 points in 2016.
Get John Tester out of the senate!#MAGA #DraintheSwamp

If Tester, who has received financial support from the American Bankers Association and the super PAC Friends of Traditional Banking, loses expect a big night for the Republicans.

Dean Heller, who was elected in 2011, is the most vulnerable Republican incumbent in the whole country.

His opponent Jacky Rosen is a first term congresswoman who served as president of her synagogue but she is hoping to tap in to a rising Hispanic population.

Trump's comments about immigration have infuriated many Hispanic voters and in Nevada they could exercise their anger by voting for the Democrat candidate.

Heller has been campaigning for a US$7,500 federal tax credit for electric vehicles, which would boost Tesla, who have a gigafactory in Nevada, producing lithium batteries.

BREAKING: Democrat Jacky Rosen is now Leading Republican Dean Heller by 4 points in Nevada for Senate according to a new poll from Emerson College

THIS IS BIG. Democrat Jacky Rosen was Down by 7 points just 3 weeks ago

Also this Would be a pickup for the Democrats

Rosen supports the tax credit but it is opposed by the Koch brothers, major Republican donors who are heavily involved in oil refining and the production of petroleum and chemicals.

The race for Governor in Idaho would not usually make ripples beyond the obscure mountain state but it is this year because Paulette Jordan would become the first Native American governor if she won.

Jordan, who is six feet tall and grew up riding horses on a farm on the Coeur d'Alene reservation in rural Idaho, is descended from chiefs.

She was elected to the tribal council 10 years ago, at the age of 28, and is now aiming at the governor's mansion.

But it is an uphill task as the last Democrat governor of Idaho was in 1978 and the Republican incumbent Brad Little is a cowboy hat-wearing rancher who has promised to reduce the state income tax and scrap an unpopular grocery tax.

Christine Hallquist, 62, would be the nation's first transgender governor if she beats the incumbent, Phil Scott.

A poll conducted last month by Gravis found her trailing the Republican by 10 points while Vermont Public Radio had the gap wider, at 14 points.

Born David Hallquist in 1956, she trained as an engineer and, as Dave, married Patricia in 1984, going on to have three children.

She continues to live with Patricia but in 2015 came out publicly as a transgender woman.

"Donald Trump has decided he wants to eradicate my community. And I'm not sure what happens when you get federal overreach. I don't think we're safe in Vermont," Hallquist said in a recent speech.