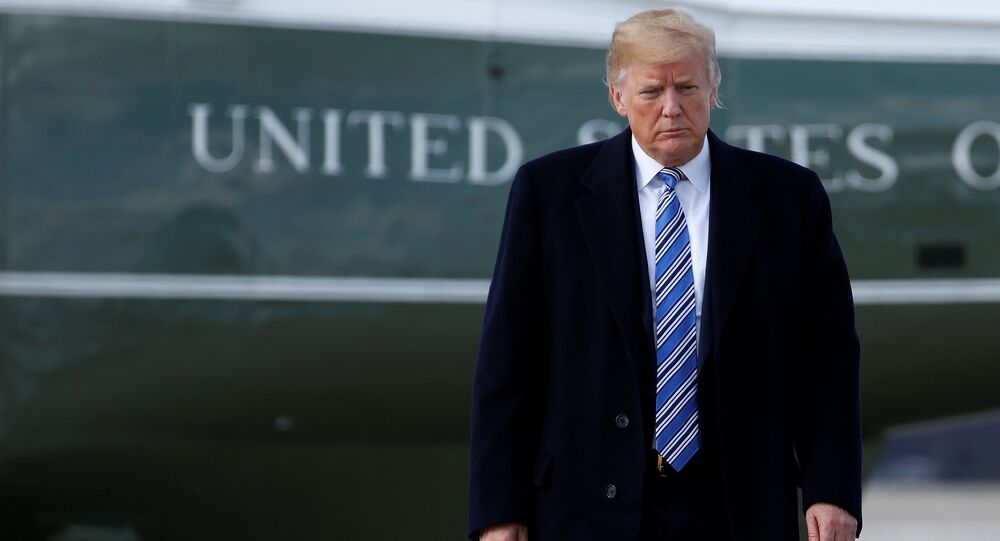 Earlier in the day, the US President took to Twitter to call for Russia to “get ready” for “nice and new and smart” missiles in Syria as a response to the alleged chemical attack in Douma – the tweet was followed by another one, urging Moscow to stop what he described as an “arms race.”

After threatening to attack Syria, POTUS scaled back the rhetoric 40 minutes later with his next tweet reading that Moscow needed Washington’s help in economy, suggesting working together and ending what he called an “armed race.”

It seems that the whole world is following Donald Trump on Twitter: social media users were quick to react to Trump’s outburst on the network. Many have noticed that the president seemed nervous, with some suggesting that he was “bipolar,” while stressing that they did not want World War III to break out:

Thank you for calling this out. Both of @realdonaldtrump tweets are literally bipolar opposites! It's enough for him to lose his base. We didn't vote for him to start WW3 which clearly is happening now. He has caved to the Deep State. Pray✝️

Dude, I live with bipolar disorder. It’s hell, but there is help and treatment. I’m not trying to be funny. I’m serious. These last two tweets basically contradict one another. You can’t regulate your emotions. You don’t think rationally. Get help.

WTF…First you threaten Russia, then you hurry up to try and make nice. This is crazier than usual…you seem nervous.

Did you see your own last Tweet? https://t.co/iH7VN5Blgk #Trump

Now you backtracking and begging?

Are you hypomanic??!
You just announced missile strikes on Syria which, you admitted, would be countered by Russian missile defense systems.
Logic. Is. Dead.
So, yeah, um #MAGA…

Are you suffering from a split personality? In your earlier tweet you warn smart missiles are coming. Now you call for an end to the arms race. Please just listen to your advisors instead of taking all direction from @FoxNews

"Get ready Russia, because they will be coming." 40 minutes later, "Russia needs us to help with their economy, something that would be very easy to do." Take your mental meds.

Some said that he’d better stop “tweeting nonsense,” calmed down and find other things to do:

Would you go to the gym, get your morning briefing, brush your teeth, or do something other than tweeting nonsense and threatening to shoot off missiles early in the morning?

Stop the insanity that is your admin. You are the worst president ever.

You are all over the map in a super alarming way. Someone in the WH, anyone: please tackle him and give him a Xanax or a pill that makes him smart, or a Spree candy…anything at this point will do. pic.twitter.com/XJQjwnYCjS

America, you are currently without a president. This is madness.

Are you crazy? You ARE the reason our relationship with Russia is so bad.
If Russia needed help with their economy, maybe putting a plant in the oval office by attacking our election system was the wrong way to ask.

"Stop the arms race?" Sure thing. We should start at home.

…while a fellow twitterian wondered if there was any “arms race” at all:

What arms race? Seriously, what year do you think it is right now?