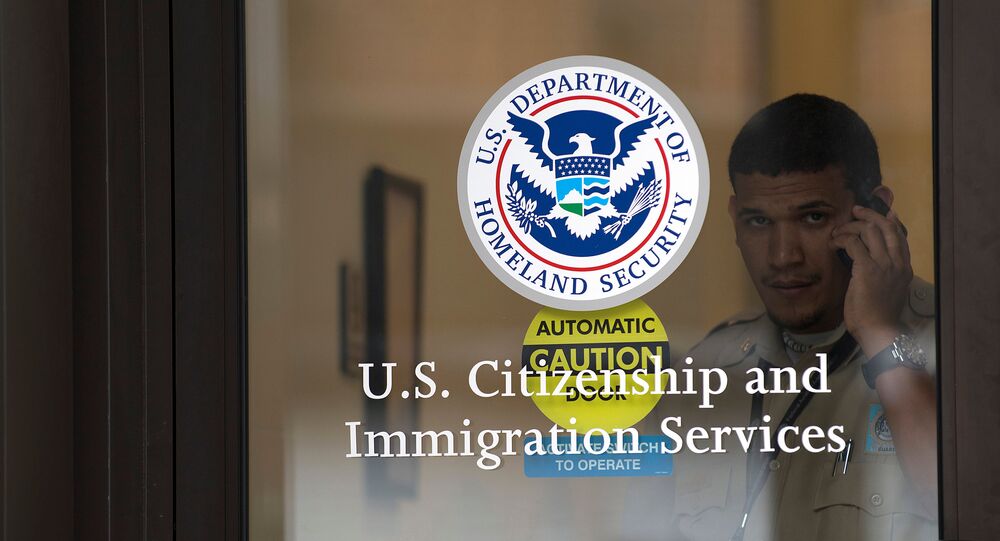 Donald Trump's new immigration guidelines will lead to more deportations, but rumors of millions of illegal immigrants being rounded up are wide of the mark, executive director of the Center for Immigration Studies Mark Krikorian told Radio Sputnik.

On Tuesday, the US Department of Homeland Security issued a new set of implementation memos to put in place President Trump's plan to radically reduce illegal immigration to the US.

The memos instruct government agencies such as Customs and Border Protection (CBP) and Immigration and Customs Enforcement (ICE) to "deploy all lawful means" to secure the US border with Mexico, prevent further illegal immigration into the US and to quickly repatriate illegal aliens.

Mark Krikorian, executive director of the Center for Immigration Studies, told Radio Sputnik that the memos put last month's executive order into effect, after it was temporarily blocked by a federal judge in Seattle earlier this month.

© REUTERS / Shannon Stapleton
'Price is Too High': This is Why Trump is 'More Right Than Wrong' in US Immigration Policy
"The overall sense of what these memos do can be summed up in just one sentence from it. It says the Homeland Security Department will 'no longer exempt classes or categories of removable aliens from potential enforcement.'"

"Under Obama, most illegal immigrants were explicitly not to be deported. What this new memo suggests is a return to traditional law enforcement, where all illegal immigrants are potentially deportable, though they won't necessarily all come to the attention of the authorities and actually be deported," he explained.

There are an estimated 11 million undocumented immigrants in the US, who had been more or less free to stay in the country under President Obama, Krikorian said.

"President Obama thought all illegal immigrants should be allowed to stay and Congress, the elected representatives of the people, did not agree, so through his own administrative means he essentially tried to engineer the same thing, where they focus only on the worst criminals and pretty explicitly told everybody else that they were going to ignore them and they'd be able to stay."

© AP Photo / LM Otero
‘Day Without Immigrants’ Protests Spread Across US (PHOTOS)
Some news outlets suggested that the Trump administration's latest immigration guidance will lead to "mass deportations" from the US, but Krikorian said the measures will only lead to about 20-30 percent more deportations annually than there are now.

"This idea that millions are going to be rounded up and deported is hyperbole, and I would even say it's a hysterical attempt at sowing panic. What you're going to see is an increase in deportations, but with existing resources we can probably deport maybe half a million people, which is about 100-150,000 a year more than we deport now."

"This is not a question of millions more. The fact is that illegal immigrants that do not come to the attention of the authorities are probably still going to be able to get away with it. It's illegal immigrants who have committed the less heinous crimes, who have driven drunk, who have beaten their wives but the cops then intervened and just let them go. Those kind of lesser criminals are now more likely to be taken into custody and sent back to their home countries," Krikorian said.