‘Day Without Immigrants’ Protests Spread Across US (PHOTOS) 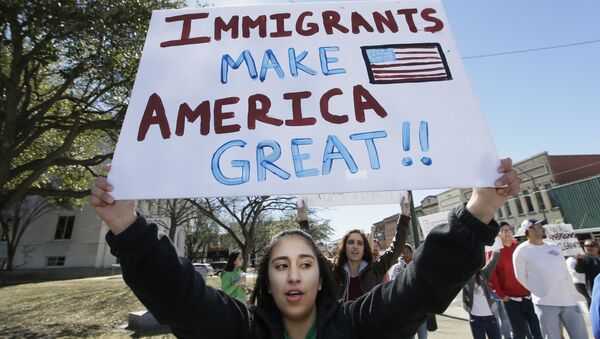 © AP Photo / LM Otero
Subscribe
On Thursday, immigrants in major cities throughout the US are boycotting work, school and shopping as part of the “Day Without Immigrants,” a protest against President Donald Trump’s hardline immigration policy meant to show the importance of immigrants in American society.

Though Trump has only been in the White House a month, he has attempted to make good on campaign promises to crack down on undocumented immigration. He has accused immigrants of taking jobs from citizens, pledged to build a wall cordoning the US off from Mexico, and tried to pass an executive order banning immigrants from several Muslim-majority countries for 90 days, as well as banning Syrian immigrants indefinitely.

Some employers have embraced the Day Without Immigrants action, closing businesses in a sign of solidarity with immigrant workers, like Philadelphia’s David Suro, himself a Mexican immigrant and owner of Tequilas Restaurant, and Washington state restaurant-owner John Andrade.

More than 250 restaurants near Charlotte, North Carolina, are closed as well.

Other businesses and institutions have decided to stay open but have pledged to donate some of the day’s profits to Latino advocacy nonprofits.

School officials in New Mexico, which houses the country’s largest Latino student population, wrote a letter to parents out of concern for a mass school absence during Thursday’s protest, with Albuquerque Public Schools principals writing in a letter, "We respectfully ask all parents to acknowledge that students need to be in class every day to benefit from the education they are guaranteed and to avoid falling behind in school and life."

Officials added that protesting students would receive an unexcused absence.

Erika Almiron, head of the Philadelphia-based immigrant-rights group Juntos, explained that "Our goal is to highlight the need for Philadelphia to expand policies that stop criminalizing communities of color…What would happen if massive raids did happen? What would the city look like?"

​Almiron detailed that immigrants in the city are concerned about an increase in immigration raids, even though Philadelphia has not seen an uptick in raids, as have other cities.

This may be due in part to Philly mayor Jim Kenney’s refusal to help law enforcement facilitate deportation, and his desire to assert Philadelphia’s status as a “sanctuary” city.

Kenney told local reporters in early December 2016, "I want everyone to understand that cities, including Philadelphia, have been the bastion of protection for minorities, LGBT people, for immigrants, and we're not walking this back."

000000
Popular comments
The day of immigrants taking off today did not do any damage at all. Many immigrants went to work throughout the United States because they can't screw around and loose a day's pay. Why don't these immigrant protesters take off a week or two ? I'll tell you why not ........ because other immigrants will snatch their jobs in a heart beat........ by the time the immigrants come back from protesting its business as usual except without them !