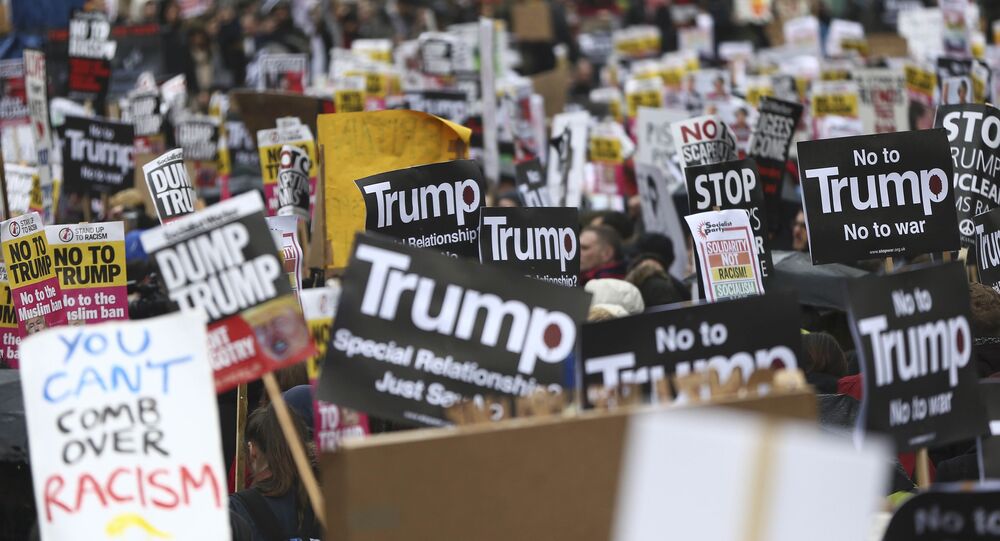 Once again, demonstrators have filled the streets in cities across the US and beyond, enraged at US President Donald Trump's travel restrictions.

In many cities, among them Denver, Philadelphia, New York, Washington DC and Miami, where Trump is due to attend the annual International Red Cross Ball at his Mar-a-Lago resort Saturday evening, protesters have gathered carrying signs condemning the president's actions and offering support to immigrants.

"No ban, no wall," has become a protest rallying cry, denouncing the president's attempt to block Syrian refugees and nationals from seven mostly Muslim countries from entering the country, as well as his promises to build a wall between the US and Mexico.

On January 27, Trump signed an executive order stopping admissions of Syrian refugees, placing a 120-day halt on other refugee programs and imposing a 90-day travel ban on nationals from Iran, Iraq, Somalia, Sudan, Syria and Yemen, causing chaos at airports and protests around the country. Upon hearing that news, thousands flocked to airport arrival zones to protest, among them lawyers offering their services to detained individuals, many of whom were in the air as the rules changed.

​The order was immediately challenged by the American Civil Liberties Union and others, and a US federal judge February 3 ordered a nationwide halt on enforcing the ban. The US Department of Homeland Security today said that following the court's ruling, it had stopped enforcing the travel ban.

But Trump has vowed to fight for the ban, and protesters are not pleased.

In London, thousands came out for a demonstrations in front of the US embassy organized by Stop the War and Stand Up to Racism against Trump's immigration policies and against the decision of Prime Minister Theresa May to invite the US president on a state visit to the country.

A petition calling on the UK government to prevent Trump from visiting because it would cause Queen Elizabeth "embarrassment" has received more than 1.8 million signatures so far, the Telegraph reports.