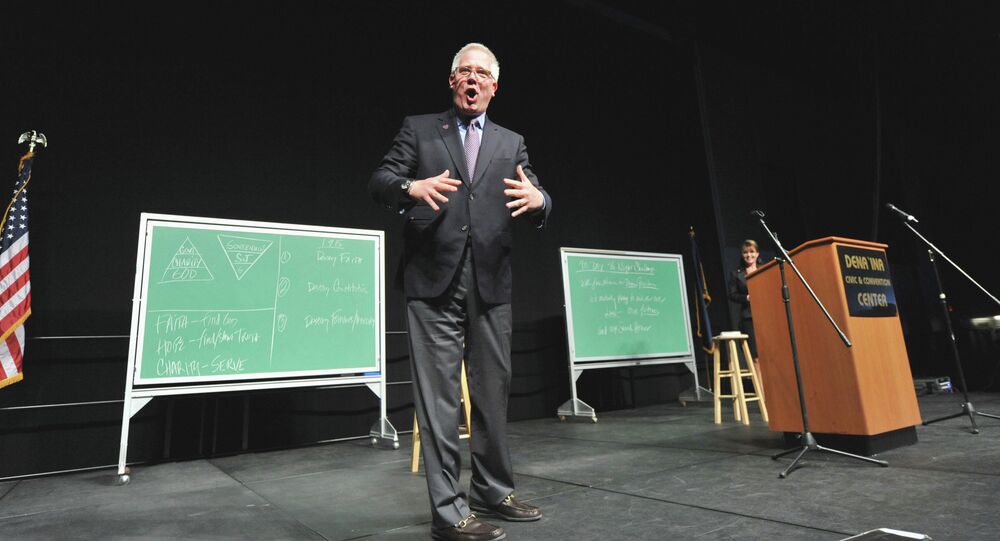 Glenn Beck’s departure from Fox News left a gaping hole in the world of mainstream media conspiracy theories. But the gullible prince of government intrigue never really left. He just wheeled his chalkboard over to radio, where he’s pitched his latest plea for attention. Beck has vowed to smuggle Syrians into the US – as long they’re Christian.

Whatever failings he may have, radio host Glenn Beck is, nevertheless, a human being, and as a human being Beck couldn’t help but feel sympathy for the millions suffering in the ongoing refugee crisis. Being a man of influence, Beck has decided to raise $10 million to help bring displaced Syrians to the United States. Even if doing so lands him in jail, the host will do everything he can to help those in need.

© Flickr / Dieter Laskowski
When in Doubt, Point at Russia: Fox News Doesn't Get it, Blames Russia for Refugee Crisis in EU

As long as they’re Christian.

"Stop asking for permission! Stop thinking we need permission," Beck told the Daily Caller. "I asked if my audience could raise $10 million before Christmas to bring the Christians in from Syria."

That preferential treatment should come of no surprise for anyone who’s followed Beck’s career. The man practically cemented his status on the far-right by promoting fears of a growing "Islamic caliphate."

"I have been nervous about this interview with you because what I feel like saying is, 'Sir, prove to me that you are not working with our enemies,'" Beck said during a 2006 interview with Keith Ellison, America’s first Muslim Congressman.

"And I know you’re not. I’m not accusing you being an enemy, but that’s the way I feel, and I think a lot of Americans will feel that way," he added.

So as generous as he may be, Beck has no intention of aiding America’s "enemies." And he also doesn’t want anyone to accuse him of being a Nazi.

"I refuse to be the church that stood and said, 'Sing louder when the trains with Jews go by.' Our churches have gone dead inside," he said of his plan. "I will so gladly grace a jail for the justice cause of saving people’s lives."

"Forget about Washington! You don’t need permission to do the right thing."

But how will Beck insure that the refugees he helps are, in fact, Christian?

"I have former CIA people that are going over, and they’re vetting everybody right now," he said. "We can save more people by Christmas than Oskar Schindler saved, okay?"

But just in case you thought he was abandoning his conservative roots and going soft on immigration, Beck managed to slip in a sly comment which wouldn’t be out of place in a Donald Trump rally.

"The State Department won’t let [Syrians] in? Really? Because I know some bridges over a river in Texas [where] that doesn’t seem to matter."

So, there you have it. Glenn Beck, a modern Schindler. But given that the man responsible for saving the lives of nearly 1,200 Jews during the Holocaust was himself a Roman Catholic, it’s a good thing the two men do not share the same narrow view that people must share your religious beliefs to be worthy of saving.