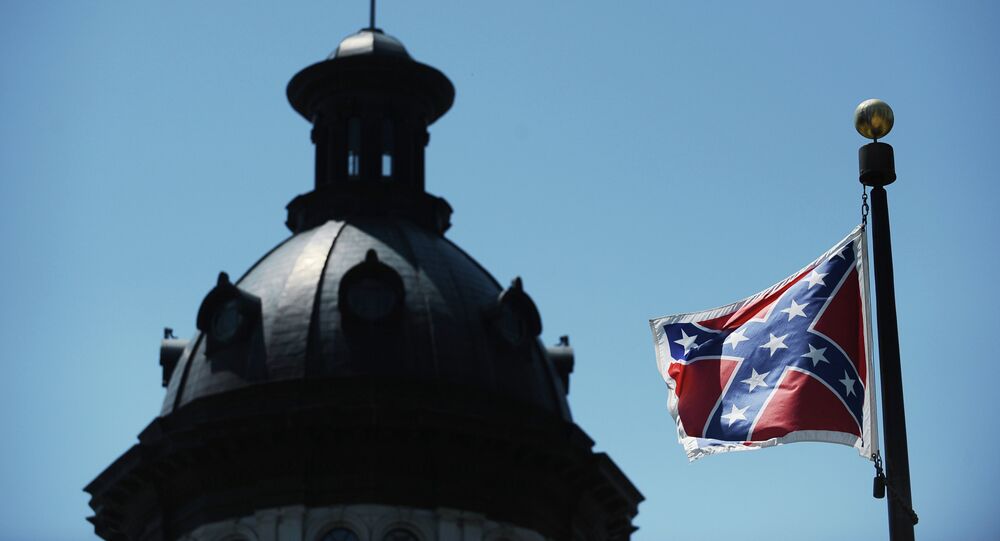 When the Confederate states broke away from the Union during the American Civil War, they adopted their own flag. Despite the fact that that war was fought — and the Confederacy was defeated — 150 years ago, the flag lives on. Some say it represents Southern pride. Some, including 81% of black Americans, see it as a symbol of slavery, which the Confederates fought to preserve.

On Thursday, the US Supreme Court upheld a decision by the state of Texas to refuse specialty car license plates which featured the Confederate flag. South Carolina, on the other hand, proudly flies the controversial banner on the statehouse grounds.

Following Wednesday’s racially-motivated terrorist attack that killed nine people in an historically black church in Charleston, that flag remains. And because of a state law – the South Carolina Heritage Act – the Confederate flag remains at full staff, even as two others on the same building have been lowered to half-staff.

"I think it’s disgusting that the flag is displayed anywhere on public property," Heidi Beirich of the Southern Poverty Law Center told the Christian Science Monitor. "This is like saying to a large chunk of your population, ‘You are lesser being.’ You can’t divorce the flag from its symbolism which was for a white supremacist country, for slavery."

Ordinarily, the position of state flags would fall under the jurisdiction of Governor Nikki Haley. But due to the controversy surrounding the Confederate flag, its position falls under direct governance of the state’s General Assembly.

In other words, Governor Haley can legally do nothing about the height at which the flag is flown, and the General Assembly is currently not in session.

Still, many have maintained that the flag has no place on government grounds at all.

"Because of where it is located, this is not a free-speech, individual issue. The position of the flag is clearly government speech…and therefore is a legitimate issue to raise," Susan Dunn of the ACLU of South Carolina told the Christian Science Monitor. "This is not a history lesson. The question to raise is, at this point in time, is this an appropriate statement for the State of South Carolina to be making?"

Polls recently conducted by NBC News show many Americans split on the issue. While 81% of blacks surveyed see the flag as a symbol of racism, only 41% of whites agree. Among political parties, 72% of Democrats view the banner as being indicative of racism, while 74% of Republicans consider it a sign of Southern heritage.

In light of Wednesday’s shooting, a petition has been circulated to have the flag permanently removed from the statehouse.

"The Confederate flag is not a symbol of southern pride but rather a symbol of rebellion and racism," the petition reads.

© AP Photo / RIC FELD
Lost Lynching Documents Prompt Concerns of Cover Up
"On the heels of the brutal killing of nine Black people in South Carolina church by a racist terrorist, it’s time to put that symbol of rebellion and racism behind us and move toward healing and a better United States of America!"

That petition has already received over 100,000 signatures.

Dylann Storm Roof, the accused shooter, was apprehended in North Carolina and is being held without bond on nine counts of murder. He was reportedly heard shouting racist remarks, and photos found on his Facebook account show the 21-year-old wearing insignia widely associated with white supremacist groups.