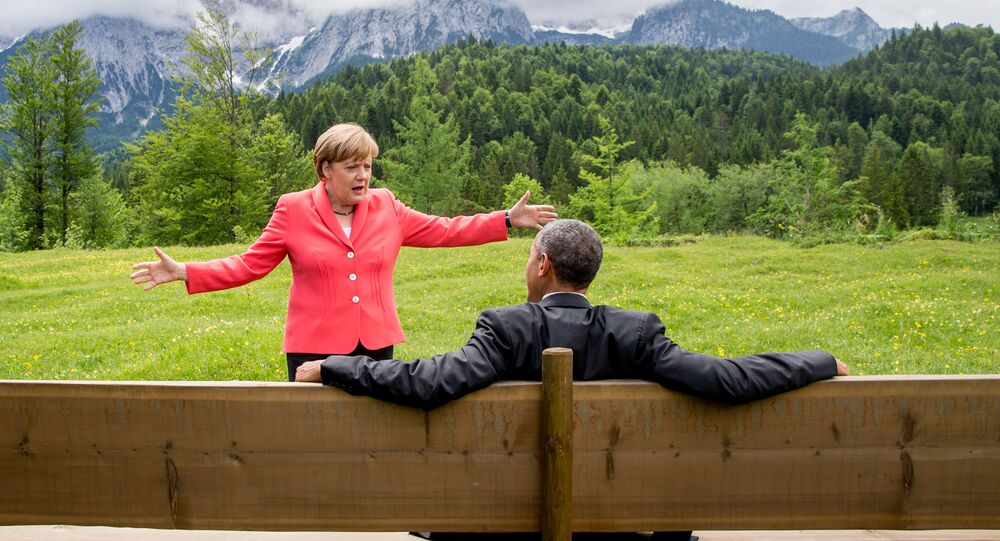 Discussing some pretty heavy topics during the G7 summit, President Barack Obama and German Chancellor Angela Merkel took some time out to view the Bavarian Alps. Too bad Obama wouldn’t give Merkel room to sit down. The hills are alive, but nothing can top that presidential legroom.

If you’ve lived in any metropolitan city in the world, ridden on any kind of confined public transit, then you’ve probably experienced it: manspreading. The space-hogging male practice of ignoring common decency while in crowded spaces and sprawling those oh-so-delicate thighs across two, three, or even four seats. The taller the man, the greater the spread.

It seems to be an endemic problem in New York City. Having already launched an ad campaign reminding subway passengers to keep that spread as minimal as possible, the NYPD made waves last month when it arrested two men for sitting with an excessively wide knee girth.

"…volunteers observed that police officers had arrested two Latino men on the charge of 'man spreading' on the subway, presumably because they were taking up more than one seat and therefore inconveniencing other riders," reads a memo from the Police Reform Organizing Project obtained by Gothamist.

But while police make arrests in the States, President Obama, evidently inspired by the wide-open view of the German Alps, decided to indulge.

Chancellor Merkel, at least, appears fully aware of the irony.

The photo op took place just outside of Elmau Castle, during a tour of Krun, a small village in the German countryside. The soaring peaks and vast green fields could give anyone the impression that there’s manspreading room for all.

The president let loose in other ways in the town of Krun, as well. On Sunday, Obama took time to sample the local beer and sausages, both of which are typical of a traditional Bavarian breakfast. Of course, when asked why the president was drinking a half-litre of beer before noon, White House officials were quick to point out that it was the nonalcoholic variety.

Which, frankly, sounds a bit pointless.