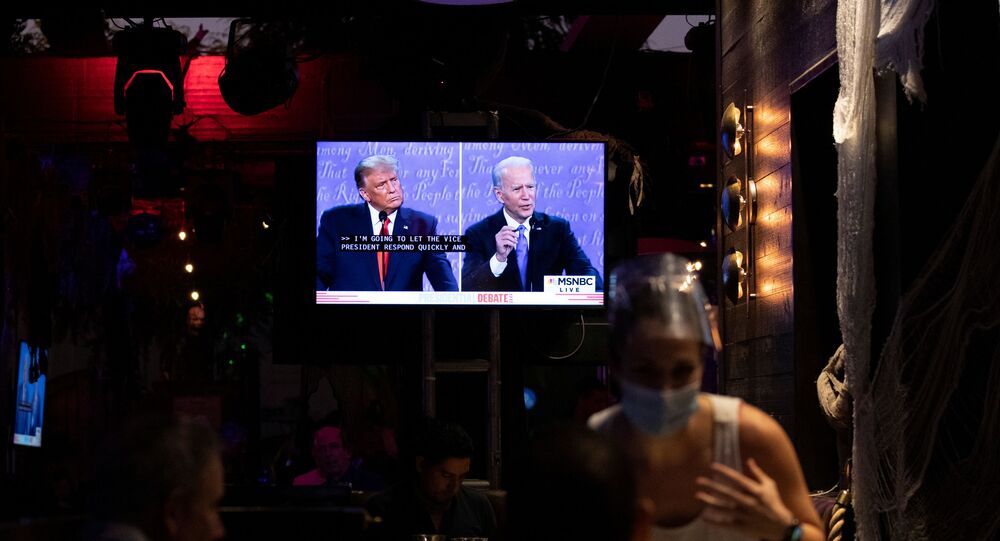 Trump opened the debate defending his record against the pandemic, saying that his administration would announce a vaccine within weeks.

While saying that Americans are learning to live with COVID-19, he also cited his personal experience of fighting the virus and boasted that he was now "immune".

Trump asserted that the coronavirus was "going away", albeit noted that there are spikes in Europe and many other places right now. He also once again accused China of failing to stop the virus from spreading around the world.

Biden, in response, claimed that Trump still has no comprehensive plan to fight COVID-19, and called POTUS' approach "tragic".

"Anyone who's responsible for that many deaths should not remain as president of the United States of America. He says we're, you know, we're learning to live with it. People are learning to die with it", Biden quipped.

The two candidates also touched upon the alleged foreign interference in the US election, with Biden saying Iran and Russia will pay a heavy price for purportedly meddling in the vote if he is elected president.

In turn, Trump accused his Democratic rival of being paid by "Russians", to which Biden responded by saying that he has never taken "a penny" from any foreign source.

"Take a look at the laptop from hell. Joe, they are calling you a corrupt politician", Trump went on to say, pressing Biden to explain himself to the American people regarding allegations of corruption tied to his son Hunter in China and Ukraine.

Biden said nothing was unethical about Hunter's business dealings in Ukraine and claimed his son never made any money in China. The ex-vice president also asserted that the information regarding the Hunter Biden allegations were part of a Russian plan, prompting Trump to chant "Russia, Russia, Russia, again."

When the topic moved to North Korea, Trump said that his predecessor, Barack Obama, once told him that Pyongyang was the biggest problem for the US, since there was a possibility of nuclear war.

POTUS went on to praise his good relatonship with North Korean leader Kim Jong-un, whom he has repeatedly met, and stated that millions of people would have been dead if not for him [Trump].

Biden, for his part, said if he would negotiate with Kim if Pyongyang reduced its nuclear capabilities, as he was responding to moderator Kristen Welker’s question of under what condition the Democratic candidate would meet with the North Korean leader should he assume presidency.

Switching to immigration policies and racism, Trump said that Democratic administrations built cages for immigrants, while Biden slammed the president for separating children from their families at the border.

© REUTERS / Lucas Jackson
As Per Your Request, Joe: Trump Publishes Video Showing Biden Vowing to Eliminate Fracking
Trump hit back, saying that migrant children are often smuggled into the country illegally by the so-called "coyotes", and added that the separation policy had been enacted by the Obama administration, under which Joe Biden served as vice president.

"They used to say I built the cages. They had a picture in a certain newspaper... of these horrible cages. They used to say: ‘Look at these cages, President Trump built them'. Then it was determined they were built in 2014 – that was him”, Trump said, pointing at Biden across the stage.

Trump then said that he has done more for the Black community than any other president (with Abraham Lincoln as a possible exception) and boasted of his record on criminal reform.

Biden, for his part, said that, during the Obama administration, 1,000 prison sentences were commuted, compared to Trump's 20. The former vice president also said that, in total, some 38,000 people were removed from federal prisons.

Their second televised showdown took place in Nashville, Tennessee, on Thursday, shortly after 9:00 p.m. EST (1:00 a.m. GMT Friday), moderated by NBC News correspondent Kristen Welker. The debate rules were changed, as the moderator was allowed to mute microphones, given that the candidates interrupted each other repeatedly during the previous debate.

Biden is ahead by an average of 8 percent nationally in the most recent eleven surveys posted on poll aggregator Realclearpolitics.com (RCP).

Trump is behind in polling in 8 of the top 12 battleground states, nearly all within a typical margin of error, while most have tightened in the past week.

Over 47 million early votes have been cast as of Thursday, outpacing 2016 by nearly a factor of eight, with 70% received by mail ahead of the November 3 election.