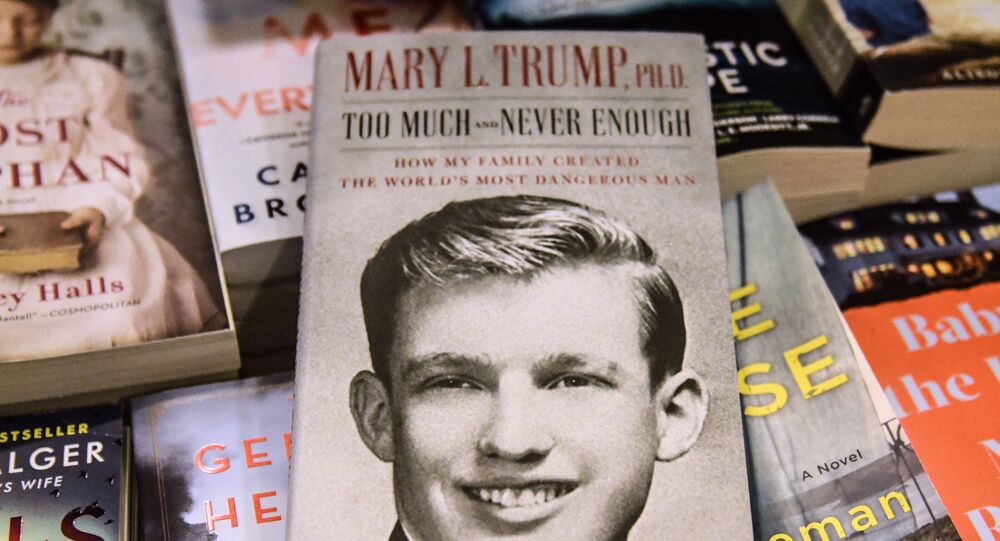 As the outcome of the tight race to the White House between incumbent President Donald Trump and Democratic candidate Joe Biden remains unclear, with the vote count in several key states ongoing, the POTUS claimed he has "already decisively won" several states and would win the overall presidential election "if you count the legal votes."

Mary Trump has accused her Uncle, President Donald Trump, of ‘flailing’ and attempting a coup.

“This was Donald talking about an attempted coup. The leader of a country trying desperately to delegitimize an election. It’s obscene and somebody’s got to step in and stop him,” Mary Trump says about WH statements today by President Trump. pic.twitter.com/xD4XvCxDhX

“We’re seeing a man who is in a unique position. Donald has never been in this place before, where there’s nobody to bail him out, there’s nobody to buy him out. He’s desperate, he’s flailing and there’s nothing he can do, legitimately, except to watch this play out helplessly,” Mary Trump says in an interview with MSNBC.

The 55-year-old daughter of Fred Trump Jr., the current president’s deceased older brother, went on to blast the Republican leadership for inaction as the president was making allegedly baseless accusations of voter fraud while claiming victory in the national vote.

“This wasn’t just Donald obfuscating or lying, this was Donald talking about an attempted coup, the leader of a country trying desperately to delegitimise an election. It’s obscene and somebody’s got to step in and stop him,” she said.

The remarks by the US President’s niece, who earlier authored a tell-all biography of POTUS, branding him a narcissist and the “world’s most dangerous man,” triggered a torrent of response on social media. Some went on Twitter to applaud Mary Trump’s “candid revelations”.

I absolutely adore this woman! I have so much respect for the candid revelations she is willing to share even when it's family! I have to find & read her book!

​Some comments contained assurances that America would have a new president by the next inauguration.

Let’s just ignore him and go about the business of counting votes and inaugurating a new president in January! Trump is now irrelevant.

​Many netizens, however, echoed Donald Trump’s concerns over voting “irregularities”.

What about the election fraud in Dem controlled cities?
Ballots being dropped off at 3am is banana republic type #BullSchiff and will not be tolerated. People in those cities will be going to prison.

Is it normal for poll counters to bubble in multiple ballots after stamping their credentials at the top? pic.twitter.com/u6iRGzyDN7

Democrats tried a coup via IC.

First failed, so will second.

did this idiot not see the droves of evidence of @dnc's attempt to interfere with his election? You guys are nuts.

There is video proof of fraud. Tons of it. So you are wrong.

@MSNBC rolled out @MaryLTrump again. I think she is in their payroll. https://t.co/NZTESlPycb

​Some people went on social media to urge patience and calm.

Everyone needs to calm down. Our systems will work. We are not broken!

Mary Trump’s interview followed statements made by Donald Trump from the White House, where he accused pollsters of interfering in the voting process and denounced the Democrats for engaging in election “fraud”.

As the tabulation of ballots in a number of key states continues in the 2020 US presidential election, Donald Trump has currently accumulated 214 electoral college votes, trailing behind his Democratic opponent Joe Biden, who has 264 votes.

The current incumbent’s chances of winning reelection hinge on the outcome of the vote count in four key states, which have yet to finish tabulating ballots amid an unprecedented number of mail-in voting because of the coronavirus pandemic.

During his speech, Trump reiterated his claims that tallies were being rigged.

Throughout his campaign the US President has been insisting, albeit without providing any proof yet, that voting by mail might be fraught with election fraud. Donald Trump’s campaign has already mounted legal challenges over alleged irregularities in multiple battleground states.