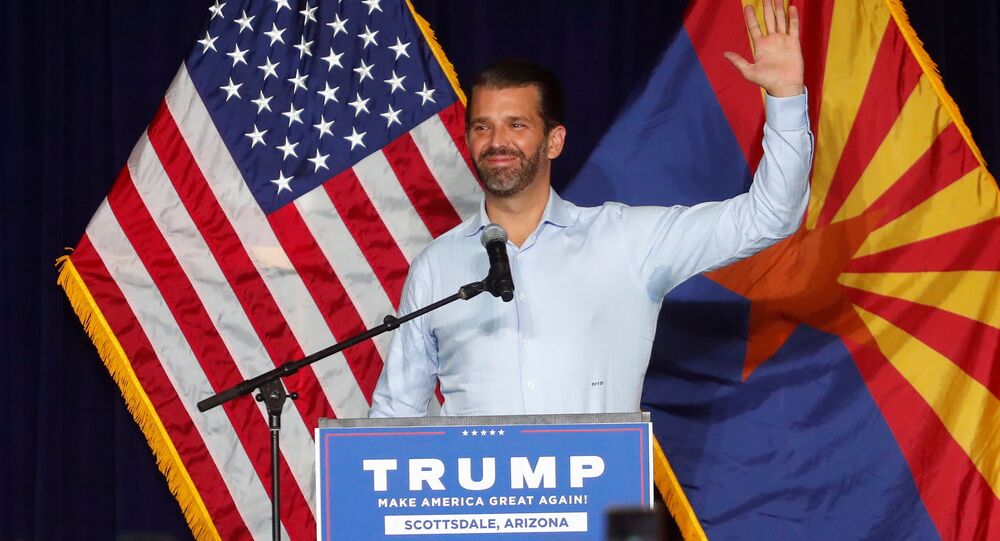 As the results of the 2020 presidential elections in America hinge on the outcome of the ongoing vote count in a number of remaining battleground states, President Donald Trump, who trails his Democratic opponent Joe Biden by 50 electoral college votes, has reiterated claims that widespread voter fraud marred the ballot-casting.

Donald Trump Jr. has publicly urged his father to “fight to the death” in the US election, while reiterating the POTUS’ claims of election 'fraud'.

The eldest child of the US president and his former spouse, businesswoman Ivana Trump, cast doubt on the credibility of the election process on Thursday, as he spoke at a news conference at the Georgia Republican Party Headquarters in Atlanta.

“I think the number one thing Donald Trump can do in this election is fight each and every one of these battles to the death so that we get full transparency in the process… And everyone on the Democrat side should welcome this unless they are actually cheating,” said Don Jr.

Echoing accusations that have been recently made by Donald Trump, he denounced the Democrats for contravening voting deadlines by continuing to accept ballots that were allegedly not submitted in time.

“We know that's against the law but you get in front of a Democrat judge and a Democrat city with Democrat control and it's okay. I think the Democrats are used to this from a Republican Party that hasn't had a backbone - you're not going to see that this time around,” he said to crowd of cheering supporters.

Trump Jr. also questioned the statistical possibility for the US president not to receive a single vote in some of the counties where up to a total of 123,000 ballots were all counted in favour of the Democratic candidate Joe Biden.

“Does anyone believe that this is possible? Because it's not, it's a statistical impossibility. It's happened not just once, it's happened over and over again. Americans need to know that this is not a banana republic and right now very few people have faith that's not the case,” added the president’s son.

The comments were subsequently echoed by the president’s son on Twitter, as he counselled his father to “go to total war” with the aim of laying bare “all of the fraud that has been going on for far too long”.

Twitter is censoring and flagging this of course why would we not want to find out if these things exist? If they don’t then we will find nothing and people could maybe regain some faith in the process which doesn’t exist now.

Why would they be against finding potential fraud? https://t.co/uJUKMtZ8iZ

​As the tweet was flagged by the micro-blogging service for containing “misleading content about an election or other civic process”, Donald Trump Jr. responded in a follow-up tweet to say he was hardly surprised this was happening.

Comments by the president’s son came ahead of a statement by Donald Trump from the White House.

President Donald Trump accused pollsters of interfering in the election process and slammed the Democrats for engaging in fraud – something he had long insisted would happen amid a surge in voting by mail due to the coronavirus pandemic.

Throughout his campaign for reelection, Donald Trump had warned that mail-in voting could potentially become a disaster fraught with election “rigging”. The president has yet to present any proof to support the claims.

​“Fake polls were designed to keep our voters at home, create the illusion of momentum for Mr. Biden," said the president, calling out Quinnipiac and Washington Post polls which saw Biden leading in Florida, Ohio and Wisconsin.

“If you count the legal votes, I easily win,” said Trump, adding that if “illegal votes” are counted, “they can try to steal the election from us”.

Trump pointed out that Detroit, Michigan, and Philadelphia, Pennsylvania, were corrupt and "cannot be responsible for engineering the outcome" of the election.

"They're finding ballots all of a sudden," said Trump, urging that ballots not received by Election Day, 3 November, should be thrown out.

While no states permit voting following 3 November, the legislation in a number of US states calls for the counting of all mail-in votes postmarked by a defined date.

Earlier this week the Trump campaign filed lawsuits demanding ballot counting be suspended in a number of crucial states, while also signalling intention to demand a recount in Wisconsin.

The appearance by Donald Trump came as results arriving from states where the tabulation of votes in ongoing have shown his Democratic opponent somewhat catching up on his lead in Pennsylvania and Georgia, with Joe Biden projected to be ahead in Nevada and Arizona.

With 264 electoral college votes currently under his belt, Biden, claiming victory in Pennsylvania would suffice for him to accumulate the required 270 electoral votes.

Donald Trump, however, would need to take North Carolina, Georgia and Pennsylvania to secure 271.

Joe Biden on Thursday called on people to remain calm amid continued vote count, adding: “Each ballot must be counted.”