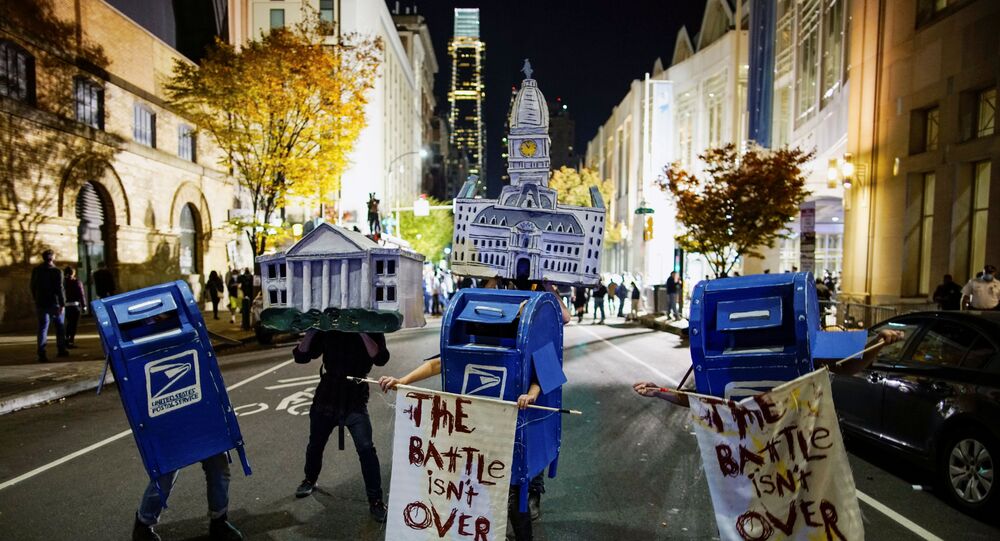 Everybody Dance Now: Partying 'Mailboxes' Caught on Camera at 'Count the Votes' Protests in Philly

In areas of post-election unrest caused by uncertainty over the outcome of a heated presidential race between incumbent US President Donald Trump and Democratic presidential candidate Joe Biden, many in different US cities took to the streets.

The Philadelphia Convention Centre saw protesters gather on Thursday, with people carrying posters saying "Every Vote Must Be Counted" and police officers observing. While both Biden and Trump supporters have been spotted at the gatherings, some new participants appeared to have joined the demonstration: dancing mailboxes and city landmarks.

Videos shared in social media showed people dancing in costumes of a city hall, the White House and mailboxes, along with other personas, with music heard in the background. The atmosphere is described in social media as that of a party.

On the ground outside of the Convention Center - video speaks louder than anything I could type. pic.twitter.com/VXo59SEGlA

​The improvised dance party welcomed a wide range of characters: from "Joe Biden" to dinosaurs.

Whatever is happening at the Convention Center has grown into quite a cast of characters. There’s a pastor telling ppl they’re going to hell and someone drowning him out with a French horn, a dude dressed as Joe Biden, plus a guy in a big dinosaur costume pic.twitter.com/G8ND4mw6VX

It’s a big party outside of the Convention Centre here in Philly. Have they all crunched the numbers or just burning with youthful optimism? Still some way to go. pic.twitter.com/Pojy2uaj2j

​​The Convention Centre site saw supporters of both campaigns fenced off by police. According to social media user reports, Trump supporters were outnumbered.

Residents of many US cities took to the streets as the country awaits the results of the presidential race between Joe Biden and Donald Trump.

As the Trump campaign suspects voter fraud and demands that ballots that arrived after the election not be counted, Democratic candidate Joe Biden and his running mate, Kamala Harris, have repeatedly tweeted that "every vote must be counted".

In key battleground states like Pennsylvania, Georgia and Nevada, many ballots remain to be processed.

Protesters Gather in Philadelphia as US Election Vote Counting Continues