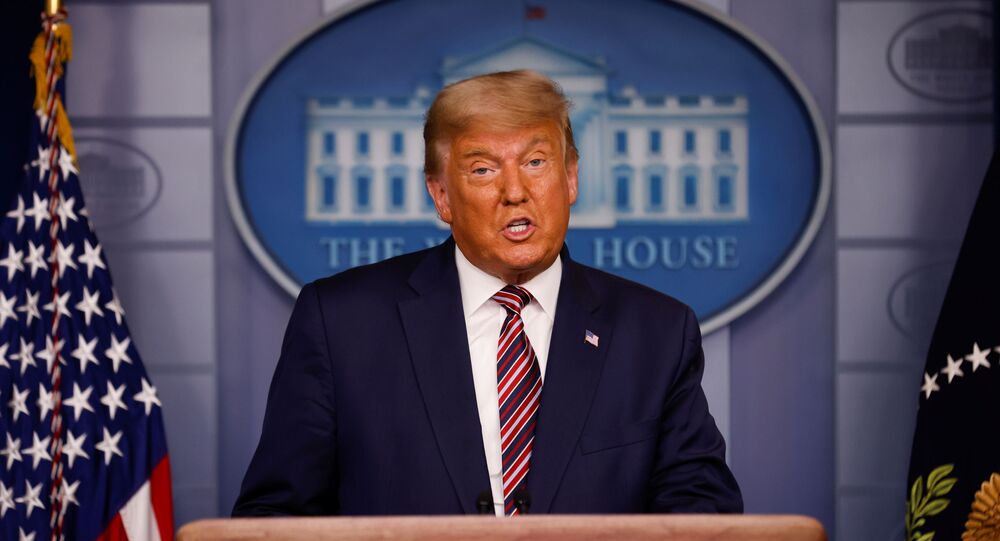 US President Donald Trump, who is trailing 40 Electoral College votes behind his Democratic opponent, claims he has "already decisively won" several states and will win the overall presidential election "if you count the legal votes."

“Fake polls were designed to keep our voters at home, create the illusion of momentum for Mr. Biden," Trump told reporters at the White House Thursday evening, slamming what he termed "suppression polls."

He explicitly called out Quinnipiac and Washington Post polls which saw Biden leading in Florida, Ohio and Wisconsin.

"There was no blue wave" for Democrats when it came to securing additional seats in the Senate, Trump pointed out.

He argued that Detroit, Michigan, and Philadelphia, Pennsylvania, are corrupt and "cannot be responsible for engineering the outcome" of the election.

Black voters make up 78.6% and 43.6% of the population in Detroit and Philadelphia, respectively. Black individuals have overwhelmingly called out Trump's targeted statements as racist and unacceptable considering the historical context of Black voting rights in the US.

"Detroit and Philadelphia are known as 2 of the most corrupt places anywhere in the country, easily, cannot be responsible for engineering the outcome of a presidential election race." - Trump

Reminder: people across the world are watching this disturbing debacle.

Trump continued to argue that "tremendous corruption and fraud" was being carried out with mail-in ballots. The US president has argued for months that widespread voter fraud would occur, but he has yet to present any evidence that supports this claim.

"They're finding ballots all of a sudden," he asserted, arguing ballots not received by Election Day, November 3, should be thrown out.

“No illegal votes being cast after Election Day," Trump argued without proof of such an occurrence.

Legislation in several states across the US calls for the counting of all mail-in votes postmarked by a defined date. No states permit voting following November 3.

Furthermore, military and overseas absentee ballots postmarked by 11:59 p.m. on November 2 will be recorded up until November 10 in Pennsylvania.

Military Times reported Wednesday that "tens of thousands" of American military voters' ballots have yet to be counted by US election officials.

No questions were taken by the US president following his address.