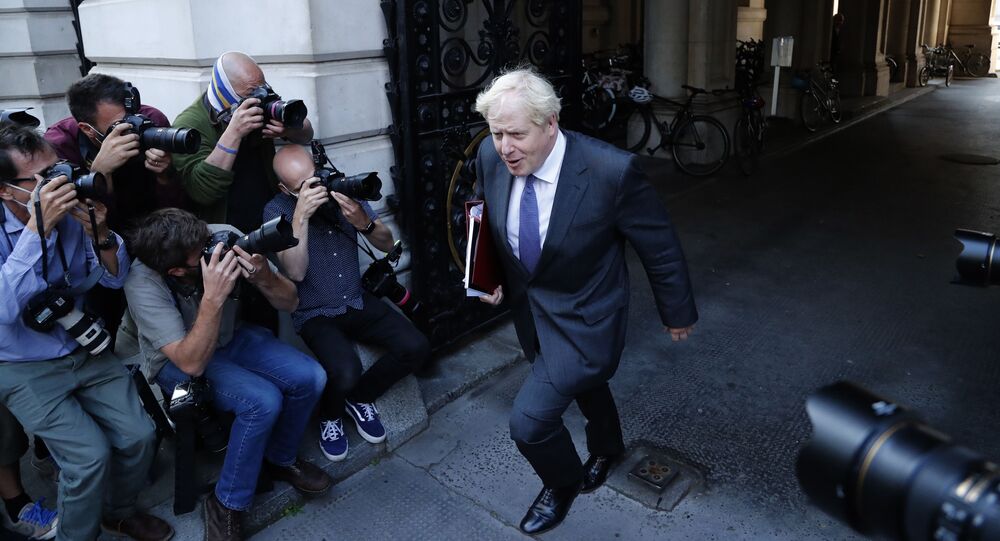 Boris Johnson was subjected to a grilling led by the UK opposition in parliament on Wednesday over the financing of lavish refurbishment works on his flat in Downing Street, with the Prime Minister’s adherence to the Ministerial Code of Conduct for Westminster politicians regarding gifts and donations called into question.

Boris Johnson may find himself the first serving prime minister to be ‘interviewed under caution’ in relation to an alleged breach of the law, after the announcement that the Electoral Commission has opened a formal investigation into the funding of the costly refurbishment of the official flat that the UK PM shares with his partner Carrie Symonds and their son.

“We are now satisfied that there are reasonable grounds to suspect that an offence or offences may have occurred,” reads the Wednesday announcement of the watchdog endowed with powers to demand documents and interview witnesses under caution.

The announced move by the watchdog reportedly has Downing Street concerned that damning evidence may be uncovered at Conservative Party headquarters, shedding light on the alleged involvement of a Tory donor in funding Johnson’s flat revamp, writes The Times.

“The worry is that there could be a paper trail… There was a very limited number of people who knew about the funding arrangements at CCHQ. It’s not clear how this will end,” a source at Downing Street was cited as saying by the outlet.

It has been claimed that Cummings had decried the alleged plan for Tory Party donors to cover the costs of the refurbishment as “unethical” and, perhaps, illegal.

Cummings revealed he had warned Johnson that the plans “almost certainly broke the rules” on the disclosure of donations, in a blog published last week, adding that he would gladly speak to the commission.

Furthermore, Ben Elliot, joint chairman of the Conservative Party, had reportedly cautioned the Prime Minister in February 2020 over the “madness” of the plans.

The Cabinet Office is believed to have funded the refurbishment of the flat prior to being reimbursed by Tory Party headquarters.

The Cabinet Office ostensibly ruled out an earlier conceived plan by Boris Johnson to use a Downing Street trust, sponsored by party donors, to fund the renovations.

Conservative peer Lord Brownlow of Shurlock Row, a multimillionaire ex-policeman, reportedly offered a sum of £58,000 “to cover the payments the party has already made on behalf of the soon-to-be-formed Downing Street Trust”.

Estimated to be worth £267m, according to Sunday Times Rich List in 2020, the 57-year peer is the founder of Huntswood recruitment consultancy and Havisham's investments.

The above-mentioned trust is still non-existent, with the watchdog to possibly probe whether the Tories failed to declare the donation.

In line with the probe into whether any transactions related to the works on the flat were properly reported, Johnson and Symonds, believed to be the mastermind behind the lavish redecorations above 11 Downing Street, may have to hand over personal emails and phone messages.

This is seriously really revoltingly ugly. Carrie S picks her decorating like her men i see 🤣 pic.twitter.com/0MZtz5RHA9

Should the Electoral Commission uncover evidence of criminal offences or deems its probe is being hampered in any way, it can pass on investigations to the police.

Johnson himself is not currently the subject of the investigation, added the watchdog on Wednesday, as possible failure to declare donations would be a matter of consideration for the parliamentary commissioner for standards.

Downing Street responded on 28 April by saying the Prime Minister was prepared to fully co-operate fully with the inquiry.

While underscoring that the investigation was a matter for the Conservative Party, Johnson’s press secretary said the Prime Minister “will of course be happy to assist if asked.”

The Electoral Commission’s probe was announced just as Boris Johnson was set to go before the House of Commons during Prime Minister's Questions. Accordingly, the PM found himself facing a grilling spearheaded by the opposition, as he denied yesterday that he had personally breached the rules.

Johnson told MPs he had paid for the renovations himself, while skirting the issue of whether he received an initial loan from the Tory party.

Boris Johnson at Prime Ministers Questions in the House of Commons today. as he attempts to answer questions about the latest example of corruption within his govt, study his face, as he faces the Labour leader & the opposition benches. pic.twitter.com/AzzUQxSHrE

​Nevertheless, the Labour leader pressed on with his attack:

"Dodgy contracts, jobs for their mates and cash for access - and who is at the heart of it? The prime minister, Major Sleaze sitting there," said Keir Starmer.

Johnson replied that Starmer should “know that I have paid for Downing Street refurbishment personally”.

“I think people will think it absolutely bizarre that he is focusing on this issue when what people want to know is what plans a Labour government might have to improve the life of people in this country,” said the Prime Minister.

​Ian Blackford, the Scottish politician serving as Leader of the Scottish National Party (SNP) in the House of Commons, also fed into the attack on Johnson, who was "up to his neck in a slump of Tory sleaze".

Should the Electoral Commission find that the Conservative Party failed to declare a donation from Brownlow, it can slap a fine worth up to £20,000 ($27, 916)on the party.

However, things get even more serious if the inquiry deems the cover-up intentional, refering the matter to the police, who could launch a criminal investigation.

Don’t Go 'Too Hard on Dom': No.10 Officials 'Fear Being Dragged’ Into Boris Johnson Leak Scandal