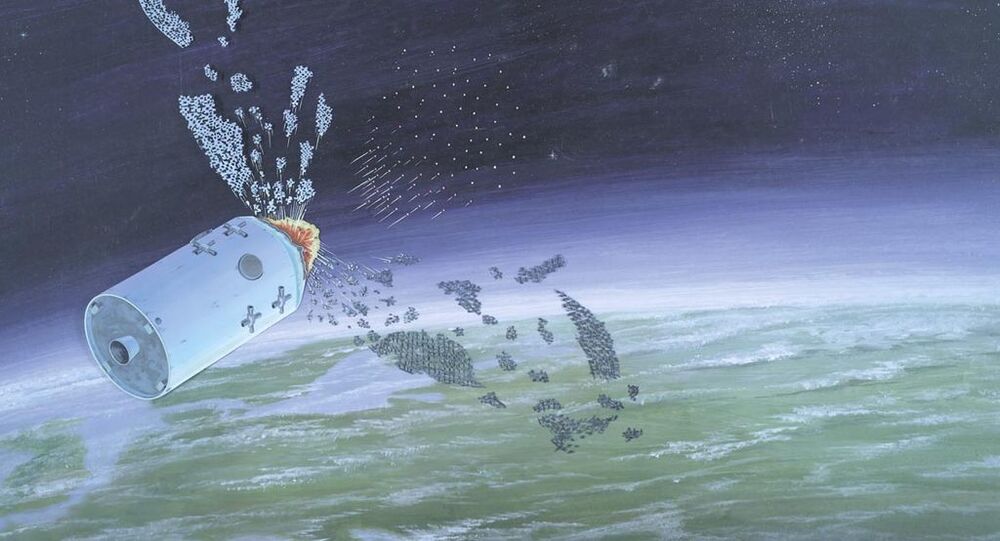 The head of the UK Space Directorate, Air Vice-Marshal Harvey Smyth, expressed concern in December 2020 over Russia having allegedly conducted a new space test of anti-satellite weapons, without providing any evidence, claiming the "consequences of miscalculations and accidents have the potential to be catastrophic".

Britain's Royal Air Force is facing an immediate need to "catch up with its adversaries", and prepare itself for a potential "space war", RAF senior officer Sir Mike Wigstone is cited as saying by the Daily Mail.

Falling behind in new defence technologies could result in the UK's "complete reliance" on space being exploited by "hostile states", warns Wigstone, underscoring that military communications are satellite dependent, with troops, military vehicles, and aircraft relying on GPS.

The warning comes ahead of a defence command paper, set to be revealed Monday.

The document, released in the wake of the publication of the Integrated Review of Foreign and Defence Policy last week, will reportedly outline that up to £16.5 billion have been set aside for investments in new technologies.

As Air Commodore Paul Godfrey was named the newly formed organisation's first commander, the RAF announced on its website on 1 February 2021 that Space Command will be a joint organisation staffed by personnel drawn from all three UK armed services, MoD civilians, and members of the commercial sector at the RAF Air Command site at High Wycombe in Buckinghamshire.

The inaugural commander of the UK’s new Space Command will be Air Cdre Paul Godfrey OBE who will be promoted to Air Vice-Marshal.

Space Command will be a Joint Command, staffed from all 3 Services, the Civil Service & key commercial sector members.

​The role of the UK Space Command, led by the RAF, is to enhance the country's ability to defend its assets in space.

Development of unmanned aircraft is also to be expanded by the RAF, according to ACM Wigston, who went on record as saying that by 2040 80 percent of RAF aircraft will be un-crewed.

Heavily armed drones, such as the Mosquito, currently in the prototype development phase, will be used in conjunction with manned fighter jets such as the Typhoon, writes the outlet.

​The Mosquito will be able to shoot down enemy aircraft while dodging surface-to-air missiles.

Swarms of 10 to 20 smaller drones will also be deployed by the RAF in future to take out targets, according to the senior RAF officer.

"Russia has developed its anti-satellite capability, against its own satellites so far, having watched the UK and US operations and realised our complete reliance on space".

ACM Wigston also warned that whatever happens in space will affect people's daily lives as well, as modern technology is hugely reliant on satellites.

The reported developments come after the US State Department in July of last year described the alleged use of "what would appear to be actual in-orbit anti-satellite weaponry" as concerning, with the UK echoing the claims.

Later, in December 2020, unsubstantiated reports claimed Russia had successfully tested anti-satellite weapons that could effectively shut down the military operations of another state.

​America's Space Command took to Twitter to announce the claim, adding it would protect the US from "aggression" in space.

Responding to the reports in 2020, Russian Foreign Ministry spokeswoman Maria Zakharova pointed to the Pentagon as seeking to justify its own anti-satellite missile development by levelling accusations at Moscow.

"Today our adversaries and rivals have developed capabilities like ground-based lasers, radio frequency jammers, hypersonic missiles, and anti-satellite missiles — weapons that increasingly enable them to do us harm from outer space." - Commentary @VP https://t.co/E620Xg4419 pic.twitter.com/VW1BgAcBKw

​Russia, the US, and UK, along with China, India, and over 100 other nations, are parties to the Outer Space Treaty, prohibiting the militarisation of space.

The accord, however, does not prohibit countries from developing technology to shoot down their defunct satellites.